Burger joint quickly in and out of planning

VISALIA – Visalia will finally have twice the opportunity to order a double-double.

Last week, the Visalia Planning Commission approved an In-N-Out location in North Visalia, fulfilling a long-running promise from the fast food chain to give the city more of its mouthwatering burgers. The 3,867-square foot fast food restaurant will be located on the northwest corner of Dinuba Boulevard and Riggin Avenue in the Orchard Walk shopping center. 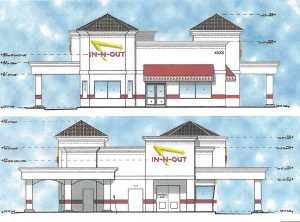 Visalia planning commission unanimously approves second In-N-Out location. Engineer for the fast food chain quelled concerns by noting their drive through is expected to accommodate as many as 20 cars at a time. Rendering courtesy of Visalia Planning Commission.

The only question the planning commissioner’s seemed to have was if the In-N-Out had designed a long enough drive-thru lane to accommodate the cars that will be backed up in line waiting to order.

Walter Dysler, an engineer for In-N-Out, said he was aware of the problems facing the fast food chain’s Mooney Boulevard location but pointed out that it was build nearly 30 years ago and was designed to stretch into the parking lot but instead backs up traffic to Walnut Avenue. He said the north Visalia location is designed to move a car about every 35-40 seconds and stretches all the way around the restaurant in a ‘J’ shape.

Josh Dan, an associate planner for Visalia, said the new location’s drive-thru is designed to hold 20 cars, twice the number required by the city. 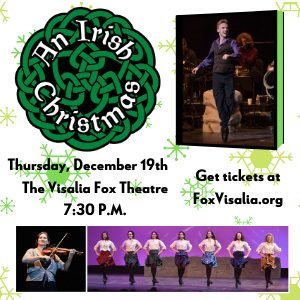 Commissioner Sarah Peariso motioned to accept the project with one tongue-in-cheek comment.

“There’s only one problem with this project,” said commissioner Sarah Peariso. “It makes In-N-Out way too close to my house.”

The motion was seconded by commissioner Chris Gomez and was approved on a 5-0 vote.

The company had planned to put a Home Depot anchor there back in 2007. But that deal never came together after the recession hit. Still, they did develop Orchard Walk East, a 300,000-square foot shopping center filled with some of the same retailers found on South Mooney Blvd. like Target and Ross. 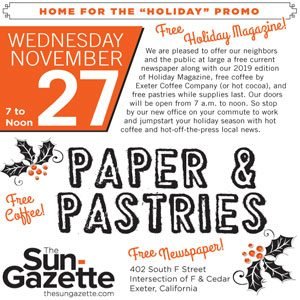 Now more than a decade later Donahue Schriber has begun to market the parcel again when he filed plans with the city this summer for three separate buildings, each with drive-thru lanes. The plans show a phase 2 for the rest of the property with no specifics.

Landing the popular burger eatery may help the developer convince other retailers that the traffic will be there to build a new anchor store. This area has attracted big residential projects, new schools and more retail uses within the past few years. A few weeks ago a new Starbucks opened on Riggin at Mooney with Riggin connecting now to Highway 99.

Besides this new spot the cult chain is said to be close to picking a spot in Tulare – likely along Hwy 99 – to place another eatery. To date, the southern California privately-held company has about 344 locations.

The business has a good reputation. In-N-Out is one of the few fast food chains in the United States to pay its employees more than state and federally mandated minimum wage guidelines starting at $14 per hour in California.

The In-N-Out restaurant chain has developed a highly loyal customer base and has been rated as one of the top fast food restaurants in several customer satisfaction surveys. Founded in 1948. The West Coast chain is headquartered in Irvine. It was found by Harry Snyder and Esther Snyder. None of the locations are franchised.