WALNUT CREEK, CALIF.– The nation’s leading manufacturer of table olives says this year’s California harvest was devastatingly low. What the statement failed to mention is the heavy-handed role the company played in the devastation.

BellCarter Foods, LLC announced its dire prediction on Nov. 11 as the table olive harvest in California was coming to a close. Compared to California’s 2019 table olive harvest, which produced 90,000 tons, 2020 was projected to return only 30,000 tons, a projection that was later amended to just over 20,000 tons after the harvest was completed—a 77% decrease from 2019, 57% below the five-year average, and the second smallest harvest in the last decade. At an average yield of just over 1.5 tons per acre, many growers chose to forgo the harvest altogether considering the high cost of picking relative to the low financial returns. 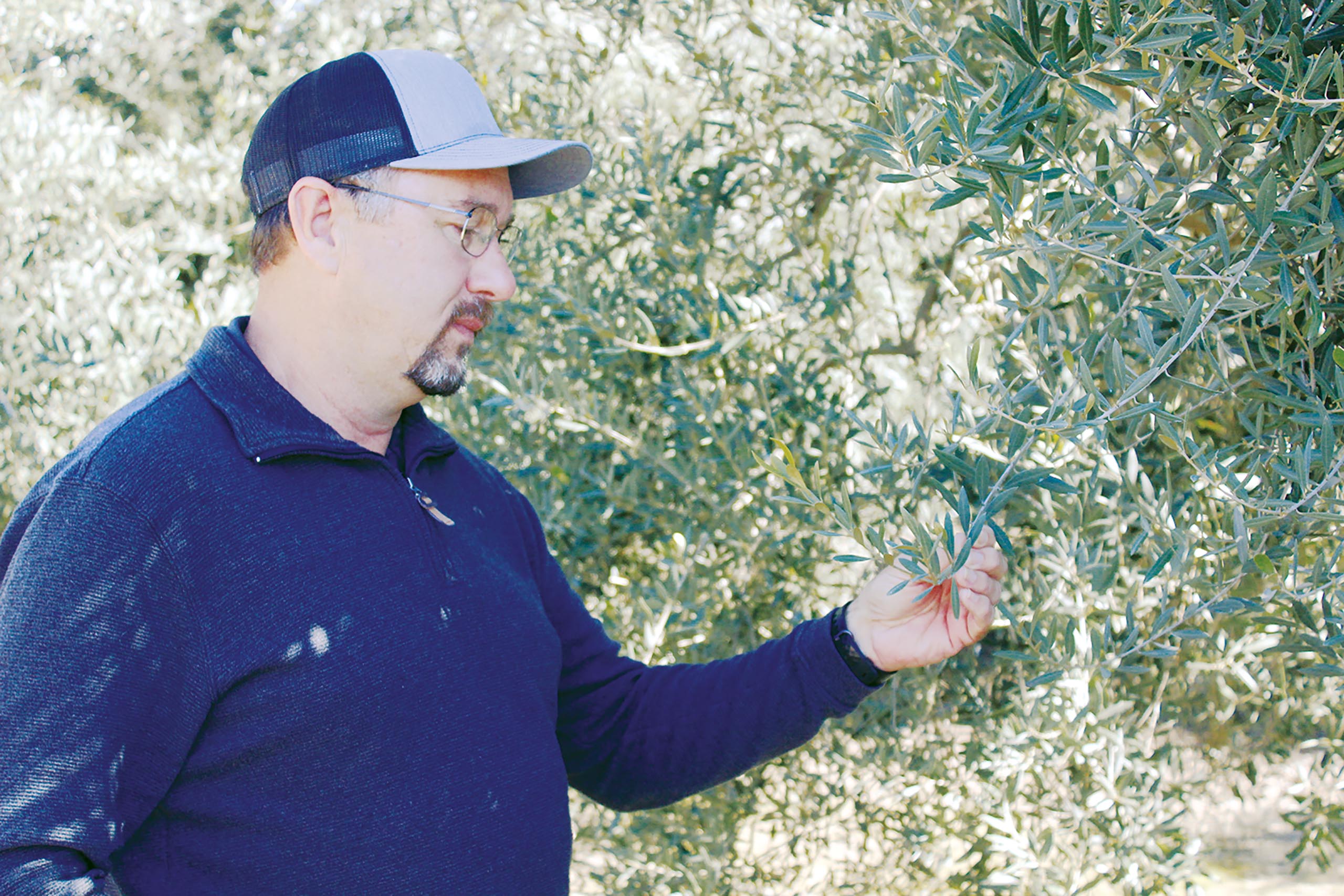 Milo Gorden ponders the future of his olive grove in Lemon Cove last week after olive processor BellCarter canceled most of its contracts with California olive growers. The decision means about 4,500 acres of olives will be affected in Tulare County. File photo

This challenge is further compounded by the reality that California acreage dedicated to table olive growing is on a steady decline. This year, 12,000 acres are devoted to table olive growing compared to 2015, when there was nearly double that amount. Faced with environmental challenges, such as water shortages, and ever-increasing labor costs, growers are switching to more profitable crops such as pistachios and almonds, making the domestic market significantly less competitive and far more expensive compared to other global olive growing regions.

“The issues facing California table olive growing have been unrelenting and significant—as an industry, we would need six times the current California acreage in order to satisfy the total domestic demand, and that doesn’t account for recent increased demand resulting from COVID-19,” said Tim Carter, CEO of Bell-Carter Foods. “Even when factoring in crop carryover, sustainable global sourcing is critical to continue to provide an uninterrupted supply of high-quality olives to retailers and consumers nationwide.”

Based in Corning, Calif., Bell-Carter is the largest olive processor in the nation. The company is best known for its Lindsay olive brand, which it purchased in the 1990s after the Lindsay Olive Growers Plant was shuttered in Lindsay, Calif. What Carter fails to mention in last week’s statement is his company abruptly canceled contracts with most of its California growers last spring, forcing many to leave the industry altogether.

On March 1, 2019 Tulare County growers, as well as many others across the state, received a letter from Bell-Carter notifying them that their contract had been terminated, effective immediately, and that they would not accept any of their harvest in 2019. One of those farmers was John Werner.

“Had Bell-Carter maintained their relations with all their previous California growers, then the industry would have enjoyed a much higher harvest yield,” Werner said. “I attribute a large portion of the decrease they cite to being caused directly by their own actions.”

The cancellations represented 10,000 acres of California olive orchards, about 4,500 of which was in Tulare County. Milo Gorden, who has been growing olives in the Lemon Cove and Ivanhoe area for 20 years, told The Sun-Gazette last year the timing of the announcement made it impossible for growers to sign contacts with a new olive processing facility, and the only other processor, Musco Family Olives in Tracy, Calif., probably won’t be able to accommodate the massive influx of olives while still meeting its obligations of its current contracts. Olives are harvested from mid-September through early November.

Carter correctly states the California table olive industry has been unable to keep up with U.S. demand forcing the United States to rely on bulk olives from global sources. The California olive industry has been losing ground in the market for years from unfair trade benefiting Spanish ripe olives. Olive acreage in Tulare County has shrunk by 20% in the last 15 years, according to University of California researchers.

Much of that competition has come from Spain’s DCOOP, the world’s largest olive conglomerate. In the spring of 2018, Bell-Carter lodged an anti-dumping complaint with the U.S. International Trade Commission against foreign olives claiming Spanish olive growers, such as DCOOP, were selling their olives far below value because they were being heavily subsidized by the European Union. The complaint led to the Trump Administration to impose a 37.4% tariff on black olives in June 2018.

But just two months later DCOOP and its Moroccan partner Devico purchased 20% of the stock in Bell-Carter, a move U.S. growers saw as an effort for Spain’s largest olive oil cooperatives to avoid paying tariffs. Werner explains it is cheaper to produce the olives overseas, then import them and complete the final step, canning them at its California plant, where they can slap a label on the can and legally call it a product of the USA. Werner said Bell-Carter’s recent statement is not an overt lie, but is dishonest and misleading for consumers.

“That is NOT California’s style,” Werner said in an email. “We prefer real, Californian grown produce that is safe for our families and children. We prefer ethical producers who share our values. And we prefer truth in marketing and production. That is California’s style.”

The Tulare County Farm Bureau issued a statement on March 15, 2019 urging state and federal officials to close a loophole that allows foreign companies like DCOOP to acquire ownership in a U.S. based olive processor, which then flooded the market with cheap foreign olives displacing California growers. Specifically, the loophole allows DCOOP to avoid paying tariffs on their imported raw unprocessed olives.

In October 2019, the World Trade Organization authorized the U.S. to close that loophole and begin imposing a 25% tariff on up to $7.5 billion worth of goods from the European Union. The decision was heralded by the Olive Growers Council of California as putting the U.S. industry “on a level playing field with Spain.” Bell-Carter campaigned against the tariffs saying California could only supply 35% of U.S. demand.

Mechanization is critical to competing in the global olive marketplace, which has already mechanized in Spain and other parts of the world. Bell-Carter Foods, Musco and the rest of the table olive industry have made attempts to mechanize harvesting over the past two decades but the financial and time investments are significant for growers, with newly planted olive trees taking more than five years to bear fruit and more than seven years to become potentially profitable.

The problem locally is that many Tulare County olive grows predated the advent of mechanical harvesting with trees that are too tall and wide and rows that are too far apart. According to the University of California, olive groves cultivated for mechanical harvesting maintain trees at a height of about 13 feet with a trunk diameter of one foot but traditional groves can have trees as tall as 30 feet with a diameter of five feet. Traditional groves also had spacing up to 30 feet between trees and rows. Newer, high density groves space trees just eight feet apart with rows 16 feet apart.

Even with mechanization, Bell-Carter says the cost of producing olives in California is just too high.

“Simply put, California pricing is not competitive enough—with or without mechanization—to sustain growers’ profits and the olive industry at large,” Carter said in his statement.

Bell-Carter contends this year’s catastrophic table olive crop in California underscores the necessity for its recent investment in a global sourcing model to diversify its supply to include high quality olives from countries within the EU and elsewhere, in addition to California grown olives. The company says the lower pricing will benefit its retail customers by securing long-term reliable and stable pricing and supply annually. Werner contends that California grown olives are not only superior in quality but are also safer. He said research on randomly selected cans of table olives has demonstrated that foreign olives contain styrene, a known carcinogenic chemical.

“The international model from Bell-Carter/DCOOP guts consumer access to that Californian product and replaces it with a label,” Werner said. “That label lacks the integrity and quality of a domestic product and is as thin, in real quality, as the paper their press release was written on.”

Bell-Carter only retained a few thousands acres in California with some of its longest tenured growers, including more than 1,400 acres in Tehama County, which is in the backyard of the company’s olive curing and manufacturing plant.

“While overall sizes of olives are expected to continue to trend smaller as a result of environmental conditions, Bell-Carter Foods is positioned to continue to provide high-quality, competitively-priced olives to meet the standards of consumers across the U.S., just as they’ve done for the past 100 years,” Carter concluded in its statement.