VISALIA – Development between Visalia and Farmersville just south of Highway 198 is all but a go after the Tulare County Board of Supervisors approved plans for the new Sequoia Drive-In Business Park. Residents should rejoice not just for the added business on the horizon, but the iconic drive-in marquee sign that’s perched just above the highway that’s slated to be preserved and renovated.

During their Dec. 15 meeting the board of supervisors heard from Resource Management Agency assistant director Aaron Bock. He said the developer, Castlewood Development Inc. is required to keep the sign as a part of their four phased project.

“One of…the few requirements that RMA ever makes on developers, we did ask that they keep the sign and develop that out to be reminiscent of…the previous use there,” Bock said. 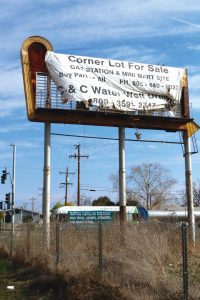 The iconic Sequoia Drive-In sign is set to be preserved and incorporated as a part of a new professional development between Farmersville and Visalia. Photo by Jermaine Johnson II.

District 3 board supervisor Amy Shuklian made a comment after the close of the public hearing on the matter, that people in Visalia and her district will be happy to see the sign renovated.

“It’s nice to see. This has been, I think, a blight in that area for quite some time. I’ve had a lot of questions about it when I was on the city council. And I love that they are going to repurpose the sign…it’s an old vintage sign, but it’s falling apart. So, thank you for that aspect of it also,” Shuklian said.

The 46.17 acre plot that abuts Nobel Avenue and straddles an irrigation ditch, will be split into 47 lots ranging for .25 acres to 2.09 acres. The total development is expected to take up 358,370 square feet. The first phase will include a convenience market with gas pumps and an attached fast-food restaurant, along with five separate commercial buildings for a total combined 68,340 square feet.

Phase two will include the development of 14 commercial buildings for a total combined square footage of 88,000, leaving a remainder lot to accommodate the existing cellular communications tower. Two access points into the development will occur on Road 156, using a circle drive connection as part of phase one and the entirety of phases two and four.

Phase three will include 10 separate commercial buildings with a total combined square footage of 104,000. One remaining lot will be developed into a stormwater retention ponding basin with the capacity to store water on-site in the event of extreme rainfall.

Phase four will include 13 commercial buildings for a total square footage of 98,030. One remaining lot will be utilized as a second stormwater retention pond to ensure all stormwater runoff remains on-site.

As a part of the project a commercial owners association (COA) will be established during phase one. According to Bock’s presentation, once improvements are constructed, the cost of operation and maintenance will fall to the COA. They will be responsible for maintenance of: landscaping, irrigation, water system, wastewater, roads, hardscape and lighting.

“In my experience, the private side probably does a better job of making folks adhere to those guidelines than we might necessarily do on the public side guidelines provided for architectural themes, landscape signage, circulation improvements, etc.,” Bock said.