LINDSAY – In honor of its 120th year in publication, The Sun-Gazette is launching its “1901 Under The Sun” campaign this month. Throughout this year, The Sun-Gazette will be telling our story of local news and some of the pioneers who have brought Tulare County reliable and objective news since the dawn of the 20th Century. The most prominent of those pioneering publishers is the late Ford Chatters, whose 61-year career as a newsman with the Lindsay Gazette, which along with The Exeter Sun is the predecessor to the The Sun-Gazette, started as a linotype operated, ended as a contributor emeritus, and included a stint as a state legislator who authored a bill to bring irrigation water to the fertile yet dusty fields of Tulare County.

Chatters, the eldest son of Milton and Edith Chatters, was born on Dec. 6, 1896 in Flushing, Mich., where his father was employed as a railroad ticket clerk and telegrapher.

He picked up the print trade early in life. Before entering high school, Chatters purchased a dozen cases of type and a large hand press from a Salvation Army major. He then taught himself how to set and press type to operate a small printing plant out of his home. On weekends he would canvass the neighborhood selling calling cards to the ladies and business cards and flyers for local merchants and then delivering them the next week. During his time at Flint High School, now known as Flint Central High School and the oldest school in the Michigan city, he published a small school newspaper in 1911 and 1912.

Chatters left for Lindsay, Calif. on June 11, 1912 to work for his uncle Myron Hallack, a partner of Aaron L. Evans, publisher of the Lindsay Gazette. Chatters took a break from the Gazette in 1916 to pursue and education in journalism. He enrolled in USC’s journalism school, became assistant news editor of the Daily Trojan, sold advertising on the side, and worked part-time for the Hollywood Citizen newspaper. At just 22 years old, Chatters purchased a one-third interest in the Gazette and in 1918 became a linotype operator before enlisting in the U.S. Army in 1919 during World War I. Chatters served with the American Expeditionary Forces in France before returning to Lindsay. He went on to buy another third of the Gazette in 1945 and the remaining shares in 1952. 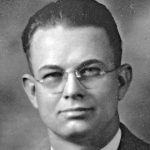 He was first elected to the Lindsay Unified School Board in 1924 and served for nine years. Chatters worked in the California Legislature during the 1921 and 1923 sessions, handled publicity in 1927 for the California Farm Bureau Federation and, during the 1929 session of the Legislature, he handled the news end of the Central Valley Water Project.

He went on to serve in the California Legislature from 1933-1937 helping to pave the way for the Central Valley Project as one of the co-authors of the Central Valley Water Act in 1933. Chatters and this paper, played a key role in advocating for the Central Valley Project. The rich soils and Mediterranean climate of Central California attracted farmers from all over the nation in the late 1800s but they quickly discovered the central conundrum in the center of the state, balancing the lack of water in the San Joaquin Valley and the flooding of the Sacramento Valley. The legislation he passed authorized the U.S. Bureau of Reclamation to sell revenue bonds that raised $170 million for the nation’s largest water and power project during Franklin D. Roosevelt’s Depression-era New Deal public works agenda.

The Gazette celebrated the arrival of irrigation water from the Central Valley Project in 1951, the culmination of a vision for a cultivated valley that began 80 years earlier. “In all the decades that have passed since the fight for outside water began, the Lindsay Gazette took an aggressive part as did of course thousands of citizens in the Lindsay district and throughout the county and state.”

After serving as chairman of the Assembly Committee on Education, Chatters served as a member of the State Board of Education from 1938-1942. In 1942 Gov. Earl Warren appointed him to the State Personnel Board where he served through 1969. He also served on the College of Pacific at Stockton in 1942 and served as a Regent on the board from 1961-1969.

“The state felt his imprint in many other ways, such as when he incorporated the young and southern-oriented California Newspaper Publishers Association and became its president in 1930,” a 1972-73 interviewer wrote. “By much traveling, he expanded it to a statewide organization.”

Chatters was a pillar of the Lindsay community helping to organize the American Legion post and serve as its first adjutant, was a charter member of the Kiwanis Club, and worked on the Orange Belt Scenic Highway Association. He was Lindsay’s Man of the Year in 1967 and Grand Marshall of the Orange Blossom Festival Parade in 1964.

“For Chatters, the Lindsay Gazette was more than a livelihood,” the California Press Foundation wrote for Chatters’ 2019 induction into its Hall of Fame. “He made it a community service organ. One of the things that carried great weight was his analysis of the ballot propositions and his recommendation for voting on them. Even though Chatters was a staunch Republican, the news in the Gazette was nonpartisan. And even after the paper was sold, the new owners came to him for background knowledge about local and state matters.”

Chatters sold the Gazette to Roy Brock in 1964 but kept his hand in the paper until his death in 1973 at the age of 77. The Gazette’s 50th anniversary edition on Oct. 19, 1951, the paper recounted Chatters’ qualification that story about him only be published “for greater service to his community and for participation … in the guidance, promotion and development of the greater Lindsay in the years yet ahead.”