Local gyms reopen the day of, next day after Tulare County meets metrics to qualify for red tier

VISALIA – Moving into the red tier has done more than just get the economy moving, it has allowed people to get moving, too.

Among the additional capacities that restaurants, retail stores and schools can now freely take advantage of, local gyms can reopen at 25%. And they wasted no time throwing open their doors last week.

Just as soon as the Tulare County Public Health Department announced the county qualified for the red tier last Tuesday, Planet Fitness in Visalia reopened immediately. Receptionist for the location, Stevie Gaytan, said the gym reopened at 3 p.m. that day.

“I think we only got about 15 people the whole day from like three to 10,” Gaytan said. “And then the day after we weren’t packed throughout the day, it was mostly like moderate, like maybe 10 to 15 people in the club at a time.”

Gaytan said the gym’s computer network alerts them when they are at 25% capacity, which in terms of people is 115 at a time. To also help limit the potential for COVID-19, the gym requires people wear masks in common concourse areas like the reception station, locker rooms and while they move between machines. But they don’t require people to wear masks while working out. The gym also provides masks at the front desk if someone forgot theirs, Gaytan said.

Staff at Visalia’s Planet Fitness aren’t taking peoples’ temperatures when they arrive, but Gaytan said they may ask someone to leave if it is obvious someone is coughing a lot or “under the weather.”

Planet Fitness locations in Tulare County were forced to close early last year in light of the pandemic. They sent their first notice of closure on March 17, 2020, and said the gym would be closed for two weeks.

“Given the increased threat that COVID-19 poses to our global community, and out of an abundance of caution, the Visalia, CA club will temporarily close on Tuesday, March 17 at 10 p.m. for two weeks through March 31. This was a difficult decision to make but we believe it is the right one,” the notice stated.

The gym reopened briefly in June after the initial surge of COVID lingered through last year’s spring season. Within a month the gym closed once again on July 13 as the summer surge of the virus began ramping up. They were not allowed to reopen again until last week. 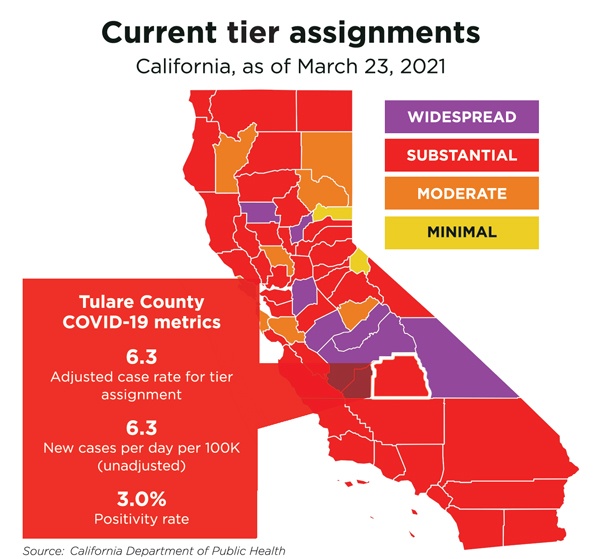 Other popular gyms in the area like the LifeStyles Center were also closed last July, but also reopened last week. They announced they were allowing for 25% capacity on March 17. It is a major move for the gym that’s owned by the Kaweah Delta Health Care District.

“We feel confident that we’re in a position now where we can safely reopen The Lifestyle Center,” said Gary Herbst, chief executive officer of Kaweah Delta Health Care District, which operates the medically-based fitness and rehabilitation facility in Visalia. “It appears by all accounts that we’re moving out of the crisis of battling the sickness of this virus and we’re transitioning back into focusing on the health and well-being of our community.”

LifeStyles noted in a press release that they were maintaining a strict standard of precaution for all of their patrons. The release stated that anyone entering the facility will undergo temperature checks, answer screening questions and wear a face mask.

Patrick Tazio, director of TLC—a division of Kaweah Delta Health Care District and a medically-based fitness and rehabilitation facility that offers equipment, exercise rooms and activities—said member will be required to wear facemasks throughout the duration of their visit.

“Our hope is that it won’t be long until we can safely support a full re-opening of our facility,” Tazio said.

Initially, the center will reopen with cardio and strength equipment (spaced six feet apart throughout the facility and in the gymnasium area), along with the track, the lap pool, the warm water pool and locker rooms.

LifeStyles’ press release stated that the number of COVID-19 cases per 100,000 residents in Tulare County, will determine the timeline of the center’s phase II and phase III rollout.

The second hospital-district gym in Tulare County, Evolutions, can also reopen under the red tier. According to the Tulare Local Healthcare District Board agenda. They will be hearing update on the gym’s status from the gym’s management company.

While people might be healthier now that gyms are open, the financial health of the gyms themselves are suspect. The operator of 10 health clubs in Central California, In-Shape Health Clubs filed for bankruptcy reorganization last December.

Because of shrinking revenues, the chain of health clubs were forced to permanently close 20 locations during the pandemic. In a Dec. 16 statement the Stockton-based company said, “As you know, California’s mandated shutdown of gyms has kept us closed for the better part of 2020,” noting that the statewide shutdowns have “dramatically impaired [In-Shape] revenue.”

In-Shape said the filing will not impact memberships or rates. The popular gym has two locations in Visalia, one in Porterville as well as six in Bakersfield. In-Shape Health Clubs operates more than 64 full-service health clubs throughout California.

“In-Shape and our extraordinary team members are not going anywhere,” the company said on its web site after filing for bankruptcy. “We’ll continue to support our communities in their fitness journeys as we work through this restructuring process.”