LINDSAY – A local grower is hoping to bottle up the history of olives in the Lindsay area and once again make Lindsay, the town not the brand, synonymous with high quality olives.

Located southwest of Lindsay, Olivaia olive orchard can boast it has the best olive oil in the valley following the sixth annual San Joaquin Valley Olive Oil Competition. Olivaia’s OLA Block X Heirloom, an extra virgin olive oil, was awarded a gold medal and the title of “Best of the Valley,” selected from the highest scoring gold medal entries, in the competition held at the Big Fresno Fair. Gold medals were awarded oils which demonstrated the highest standards for type and/or varietal character, balance, structure and complexities. Husband and wife owners Guilio Zavolta and Dr. Rachelle Bross were up against 42 entries from 17 different extra virgin olive oil producers from throughout the state. Extra virgin olive oil must meet rigorous chemical and sensory tests. According to the California Olive Oil Council, the oil’s chemistry must meet or exceed specific parameters that indicate the careful handling and storage, certify no chemicals or extreme heat were used during the extraction process and that the oil is free of defects of flavor or odor.

What helped Olivaia’s stand out from the other extra virgin olive oils was its fruit forward flavor and unique blend of green almond, grass and floral notes.

“It has a beautiful bouquet,” Zavolta said. “It pairs well with vegetables, legumes and is an overall flavor enhancer for other food.” 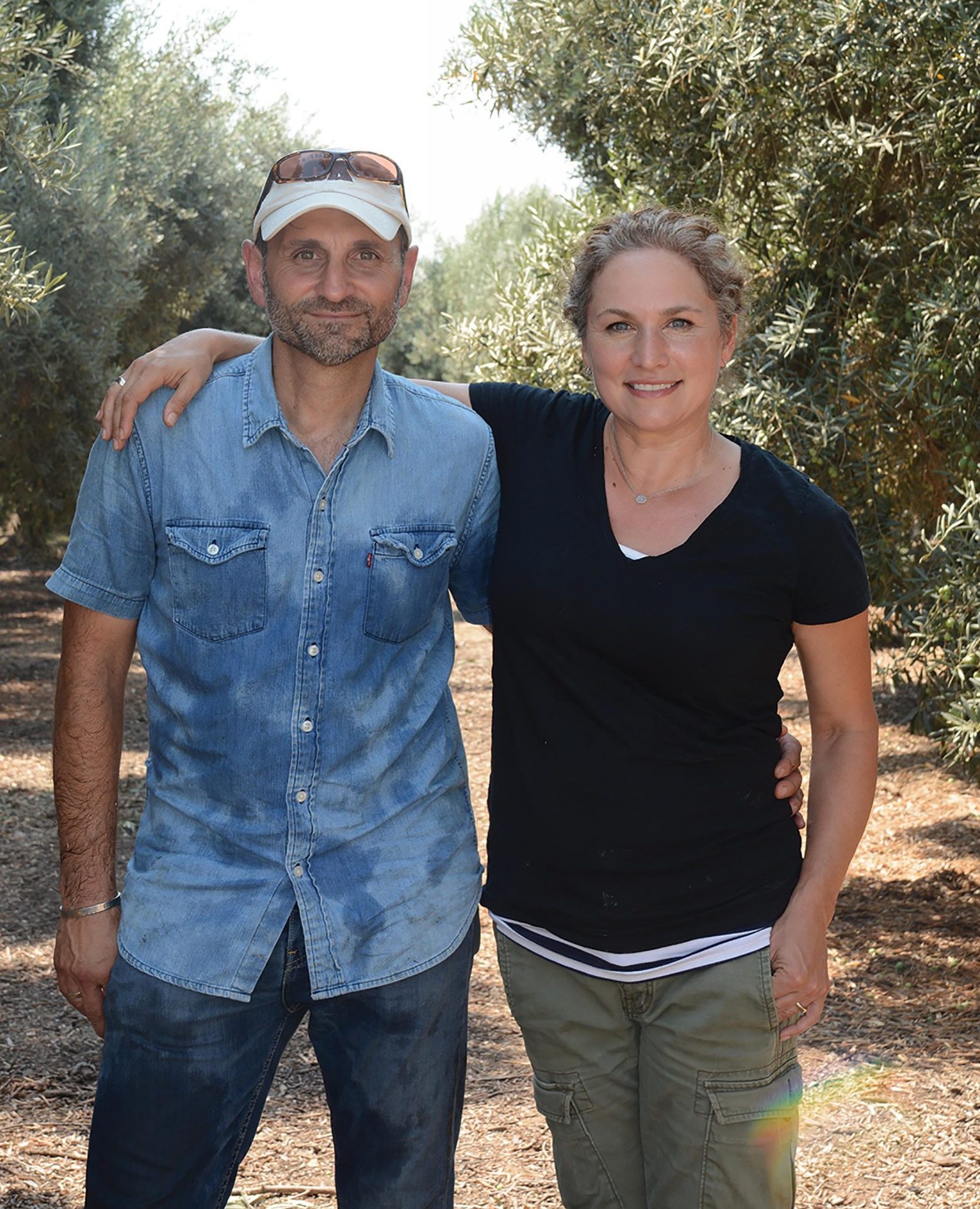 Guilio and Rachelle Zavolta re-establish Lindsay as an olive Mecca after their OLA Block X Heirloom olive oil was awarded a gold medal and “Best of the Valley” at the sixth annual San Joaquin Valley Olive Oil Competition.Photo courtesy of Olivaia

The “OLA” in the product’s name stands for original Lindsay artisanal because the olives are part of the rich local history that at one time made the Lindsay area the ripe olive capitol of the country, and artisanal because Zavolta, who comes from an olive growing family, and Bross, a registered dietitian, are committed to a traditional, more natural style of farming. Bross also sits on the California Olive Oil Council. Block X Heirloom is in reference to the section of the orchard with experimental offshoots of sevillano and manzanilla olives which have created nine unique types of olives.

“UC Davis was unable to tell us what kind of olives they were,” Zavolta said.

Block X olives were also the primary ingredient propelling Olivaia’s Ola Block X Blend to a silver medal at the Fresno Fair. The couple entered their first batch of olive oil into competition in 2017 and immediately won Best of Show at the Fresno Fair and a gold medal at the California State Fair. Since then, Olivaia’s OLA olive oil has continued to distinguish themselves in competitions, at fairs, and most importantly in kitchens throughout the state.

“The older trees create unique oils with characteristics that can’t be found anywhere else,” Guilio said. “In some ways, they are unique to each individual tree, naturally cultivated over time.”

Inspired by the history of olives in Lindsay and the age of the trees themselves, the couple decided to use old photographs from the Lindsay Olive Growers plant to decorate their tins of olive oil. The former Lindsay Olive Growers plant was once home to the largest olive cannery in the world. At its peak, the plant employed 500 people and earned Lindsay the nickname of the “Olive Capital of the World.” Lindsay Olive Growers ceased operations at the plant in 1992 after mismanagement, lawsuits and steady increase of highly subsidized foreign competitors, but the facility still stands as a monument to past glory encompassing an entire city block at the corner of North Westwood Avenue and West Tulare Road in Lindsay.

“We not only re-established ties with the table olive sector but embarked on an oil mission to put ‘history in a bottle’,” Zavolta said. “After all, the orchard has been the home to many of California’s original olives.”

The awards are significant for the couple, which believe the age of the grove is what makes it more complex and desirable. Zavolta said most of more than 100-year-old olive trees in the Tulare County are being pulled for more lucrative crops, so he and his wife started producing olive oil with their centennial trees to demonstrate the trees should be preserved not pulled out of the ground.

“Rather than destroying the rich olive history in Tulare County we should be celebrating it,” Zavolta said. “This year’s ‘Best of the Valley’ is further validation of our mission.”

Zavolta and Bross got involved with olives in the Lindsay area in 2012, long after the Lindsay Olive name had been acquired by the nation’s largest table olive producer, Bell-Carter Foods based in Walnut Creek, Calif. When they bought the grove it was scheduled to be pulled and replanted with citrus or almonds, but the couple decided to save the 100-year-old olive grove. The immediately began rehabilitating the mature olive trees which had been neglected in anticipation of the sale.

“Olives don’t need to be recycled,” Guilio said. “The suggestion is short sighted. I think we are better off learning to work with what we have.”

There has been a push in the olive industry to pull up orchards and replant them so rows are close enough for mechanical harvesting machines. While traditional olive acreage is typically planted 60 to 80 trees per acre and hand-harvested, the “modern acreage system” is optimized with 200 to 250 trees per acre and mechanical harvesting using shaker technology. This approach doubles the yield per acre and reduces harvesting costs to roughly one-third of hand harvesting, which drives significantly improved grower economics. Just as important is the fact that olive trees are also drought-tolerant and annually use less water than almonds or walnuts—a critical attribute given California’s constant drought concerns, rising water costs, and a tightening water supply. The trees enjoy peak productivity for decades and perform well on marginal soil, which helps minimize capital investment.

“The values of these old groves is historical, cultural and culinary,” Guilio said. “In other parts of the world, old olive trees are really prized.”

The movement has been touted by Musco Family Olive Co., the second-largest olive producer in California, as the future of the olive industry. UC Davis hosted a free webinar on modernizing table olive groves just last week.

Guilio counters there is value and complexity in older trees and Guilio has taken a seat on the California Olive Committee to convince table olive growers to at least invest in research to see what options there might be for heirloom and legacy olive trees. For example, Guilio said older trees have very deep root systems which make them more drought resistant because they can draw water from multiple areas and not just below the surface. Newer plants require more water to supply the shallow root system.

“From the beginning, we have set out to show there is value in these trees,” Guilio said.