TULARE COUNTY – In a strategic move away from the policies of the past, public transit agencies around the country are adopting an unconventional plan to appeal to the next generation of riders. It involves a new model, a familiar private brand and it’s happening here too.

The recently formed Tulare County Regional Transit Agency plans to partner with Uber to operate hundreds of zero emission transit vans around the county. This will allow residents to use an app to get on-demand, curb-to-curb service.

The all-electric passenger vans will be used for transporting residents around the community, from home to work and for shopping and other services. The electric vans are designed to replace large transit buses on routes with low ridership.

Executive director of the new transit agency, Richard Tree, said the program has already been pioneered in Porterville where a fleet of 12 modified Ford Transit vans outfitted with rechargeable battery powertrains are proving popular. Since May the vans, made in Colorado, have been branded with the Uber logo following an agreement to plug into Uber’s worldwide ride-hailing app. That has been a marketing plus that has jump-started ridership. The service marks a new approach away from scheduled transit buses to door-to-door transit.

The vans seat seven passengers and include a wheelchair securement area. 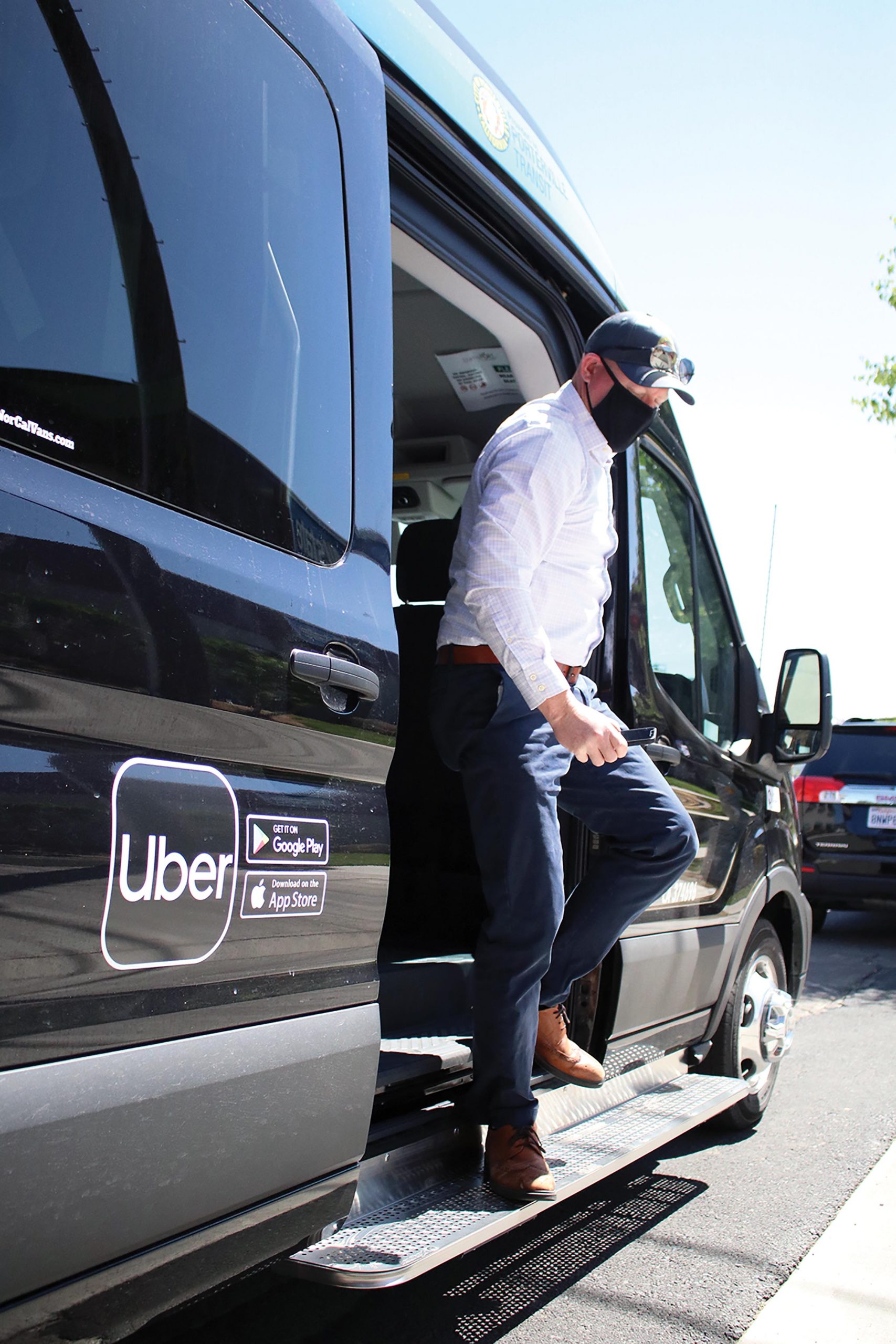 Richard Tree (seen above) who pioneered a public-private partnership between Porterville Transit and Uber is taking his idea county wide as the director of the Tulare County Regional Transit Agency.Photos by Reggie Ellis

The agency has submitted funding requests that have been positively received, Tree said, giving him confidence, the countywide Uber ride share plan could be underway as soon as next year, including in Visalia.

“Although Visalia is not part of the 8-member agency, we are in talks with the city to participate in the program as well,” Tree said. Visalia alone could see a fleet of 100 vans itself running around town, he added.

The Tulare County Regional Transit Agency (“TCRTA” or “Transit Agency”) is a joint powers agency formed by the County of Tulare and the cities of Dinuba, Exeter, Farmersville, Lindsay, Porterville, Tulare, and Woodlake that became effective in August 2020.

The backdrop is this is a new approach to traditional transit in Tulare County whose transit ridership, like all across the U.S., has trended lower. In Tulare County a report says as of 2016-2017 county agencies saw a decrease in fare recovery ratio from over 20% to an average of less than 12%. Even though service hours increased 13%, ridership decreased 14%.

The same report said the national decrease in bus transit passengers was even more dramatic in California. The portion of transit trips used for the daily journey to work is low, 0.7% compared to the national average of over 5%.

With no place to go but up, Tree says the partnership with Uber—the best-known brand among ride-hailing services—has proven to be a winner in Porterville with riders reporting they feel confident in using the Uber app, a well-known commodity to hail and pay for their ride. A trip is as little as $3.

Even if you don’t use the Uber app, the agency will be operating a dispatch service you can call on the phone and pay with a credit card.

Customers wanting a ride will use the Uber app to see the location of vans operating at that time, select the nearest driver and pay for the app just as you would when you order a ride from any Uber driver. Instead of a personal vehicle with an Uber sticker arriving, a van clearly marked and co-decaled as public transit will arrive and pick you up for the one-way trip. The van will pick up others en route to your destination.

Tree says the agency will set up a network of fast charging service stations for charging the vans-open to the public as well.

“We are in talks with [Edison] and others to site the stations that will be operated by the agency,” Tree said. The vans can be charged in just over an hour by a 50-kW DC fast charger. The stations will be an income source for the agency.

Tree said the Uber brand is helping to attract younger riders to the service. Uber has worked worldwide to partner with cities to improve public transit.

A company statement reads, “We share the same vision as the cities where we operate. All of us want cleaner, less-congested cities where everyone can move freely. In partnership with cities and transit agencies, we can help make public transit more accessible and easier to use while reducing private car ownership.”

Uber argues that they can make access to transit available to everyone, including those with accessibility needs. Uber has been providing first-and last-mile solutions, the industry name for the distance most people may have to walk to access transportation services, for cities since 2015. The partnerships look different in each market, such as using the app to purchase train and bus tickets in Denver, on-demand paratransit options in Massachusetts and rideshares by an Uber driver, taxi company or senior transport service in Pinellas County, Florida for late-night essential workers. Denver later added ride hailing services, and last month, Uber Transit began offering services in Cecil County, Maryland. Since then, the company has integrated public transportation schedules and directions into its app for over a dozen other cities. Since 2017, the San Joaquin Regional Transit District covering Stockton/Manteca has partnered with Uber.

Uber Technologies, Inc., commonly known as Uber, is an American technology company. Its services include ride-hailing, food delivery (Uber Eats), package delivery, couriers, freight transportation, and, through a partnership with Lime, electric bicycle and motorized scooter rental. The company is based in San Francisco and has operations in over 900 metropolitan areas worldwide. It is one of the largest firms in the so-called gig economy.