Tooleville residents get the ear of the State Water Resources Control Board Dec. 7, state says Tooleville qualifies for consolidation under SB-403 should negotiations with Exeter fail

EXETER – The residents of Tooleville finally got to say their piece in front of the California State Water Resources Control Board Dec. 7, as a part of the voluntary consolidation process to hitch Tooleville’s mangled water system to their neighbors in Exeter about a mile down the road.

Community members—most of whom only speak Spanish—from the two-road town plagued with water contamination, infrastructure and supply issues since at least 1978 gathered at the Exeter Memorial Building to state their wants and needs, and illustrate their quality of life without the basic human right to a clean, reliable source of water.

Robert Belman has lived in Tooleville his whole life. He and his father have three homes there, and he said there’s never been a time he hasn’t been concerned about running out of water, or having to remember not to drink it.

“I know it’s not Exeter’s obligation to help Tooleville’s residents from this crisis, but I feel like it’s the honorable thing to do,” Belman said. “Tooleville residents contribute a lot to the local economy: they shop at the grocery stores, they eat at the restaurants. In many ways, it might not seem like Tooleville residents are a part of Exeter, but they do contribute…I just hope that we can finally resolve this issue, not just for my personal well-being but for my neighbors and their children.”

In July, during the hottest summer in California on record, one of Tooleville’s two active wells stopped producing water, throwing the community into immediate crisis. Although both wells are now producing, the unincorporated community is still on a boil water notice due to the water system falling below 50 psi, the level where water pressure no longer self-seals cracks or leaks, allowing bacteria to get into the system. Low water pressure also poses another safety issue for the many Tooleville residents who use swamp coolers located on their roofs. If pumps can’t create enough pressure, it renders the A/C units essentially useless.

Tooleville resident Angel Ponce Alvarez said the community has been struggling with low water pressure for years now, and it has taken a toll on the residents.

“We have to wait until 10:00 p.m. to take showers,” Alvarez said. “During the summer, no one is comfortable or well-rested to go to work the next day.”

Maria Olivera, a longtime Tooleville resident and current board member of the Tooleville Mutual Nonprofit Water Association, told the state water board action is needed now.

“We’ve been working on this for lots of years, we thought we were going to be connected two or three years ago,” Olivera said. “We hope that they do it fast because we need the water.” 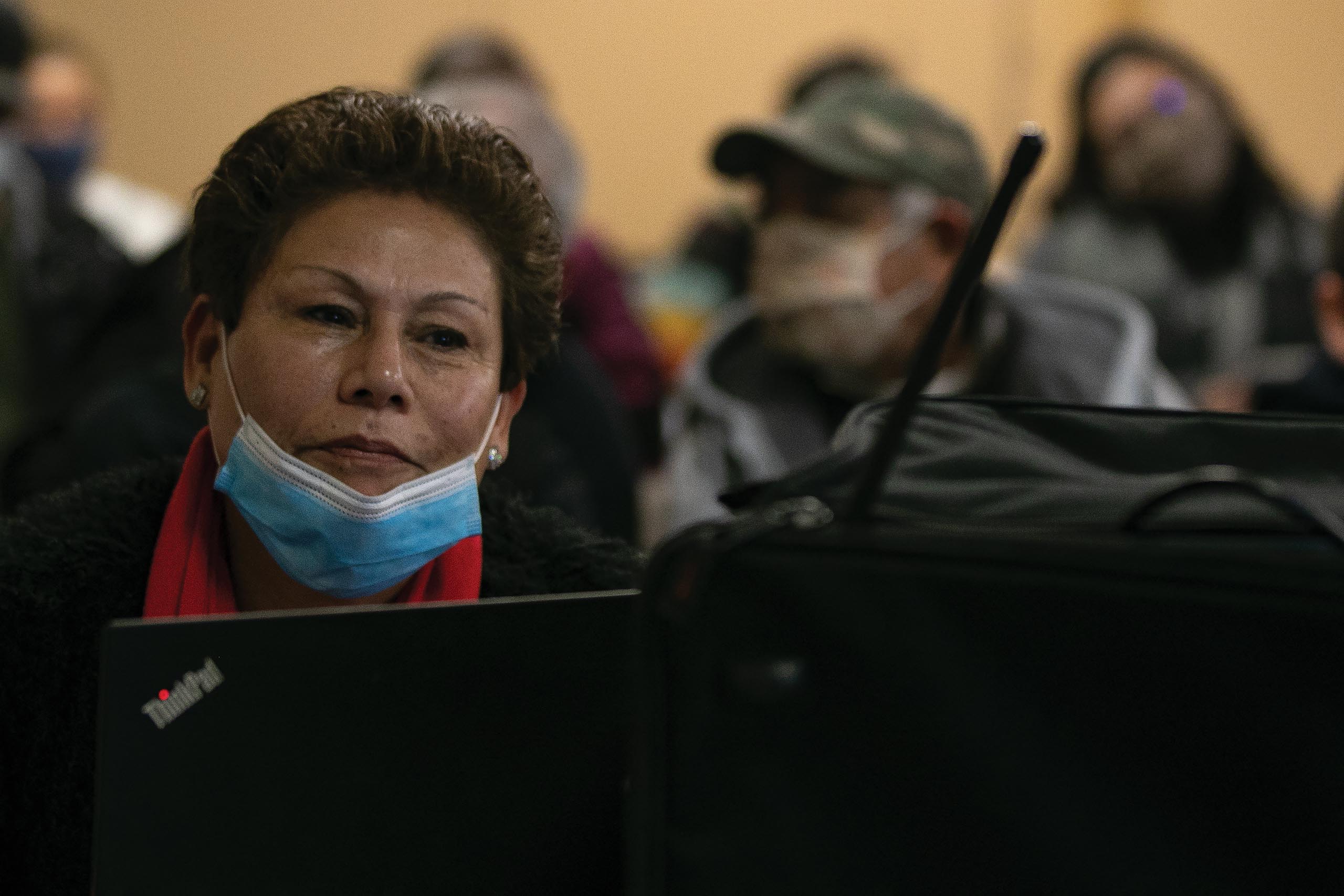 To many in the room’s disappointment, State Water Board senior water resources engineer Bryan Potter said the process will likely take years. Bi-weekly bottled water deliveries tide Tooleville’s residents over while they wait.

“We all wish that this was something that could happen at the snap of our fingers, but that is not always the case,” Potter said. “Projects like this can be very complex, not only from a negotiation standpoint, but from an engineering and construction standpoint. That’s the reality of these types of projects.”

Olivera’s grown daughter, Beatrice, who was raised in Tooleville since 1974, said there’s always been a water struggle there, but it’s become a huge challenge in the last five or six years.

“The residents sometimes are left without water to finish washing their clothes, they are stuck in the showers with soap still lathered on themselves, and so many other issues like cooking food, waiting for water to be delivered…their plants and their vegetable gardens are dying,” Beatrice said. “They work in the fields and it’s very difficult for them to take their showers and get into bed early because they are waiting for their water to come back at 10:00 p.m. at night when they’re having to wake up at four or five in the morning.”

Exeter has problems, but also opportunity

Exeter city manager Adam Ennis took to the Dec. 7 meeting’s Zoom chat to express his concerns about Exeter’s own old, leaky water system, asking if the State Water Board had looked into their problems.

When Tooleville came knocking to consolidate their water system with their neighbor’s in Sept. 2019, Exeter’s city council turned them down. The month prior, the city had published their water system master plan, which identified some serious shortcomings in the Exeter’s water infrastructure.

“Infrastructure doesn’t happen overnight. It’s years in the making most of the time, especially when you’ve got to go back and look at funding and budgeting,” Ennis told The Sun-Gazette in an August interview. “It was very obvious that there were some real changes that needed to be made to even get us in a spot to be able to do anything.”

Exeter identified about $15 million in short-term and long-term capital improvement projects—replacing all of the old, leaky water pipelines in the city, drilling new wells and repairing old ones, to name a few—in the water master plan during a time where the city’s revenues were struggling to keep up with their $2.7 million spending plan, with just 3% in reserves and their sewer and water funds in the red. In order to pay for these projects, the city passed a rate increase at the end of 2019, which will effectively double the price of water, from a base rate of $24.46 per month for a single-family residence to $47.74 per month over five years.

With consolidation, however, the state offers financial incentives, especially in voluntary circumstances. Brenda Pauli of the State Water Board made clear at the Dec. 7 meeting they have no shortage of money, and are willing to hand it out to cooperating parties.

If the city of Exeter can come to voluntary terms with Tooleville by Feb. 2022, in addition to receiving $2,500 per Exeter service connection—over $8 million—for a needed water infrastructure project, the city would be eligible for a $10 million, 0% interest loan to be used to update their own water system. The state could also fork out up to $80,000 per Tooleville connection—roughly $6.6 million—to cover construction costs for consolidation.

Ennis’ concerns of the long term costs of absorbing Tooleville into Exeter’s water system would still need to be hashed out in negotiations, like his argument that Exeter would not be able to pass a Proposition 218 rate increase that accommodates for Tooleville residents’ share of water usage and the construction and long term costs of a pipeline for consolidation.

“I can’t charge Exeter residents for that pipeline, because they get no benefit from it,” Ennis said in August. “Under Prop. 218, your rates have to be set to charge customers for the cost of providing them the service. The Exeter residents don’t need that 16-inch pipeline for them to get service.”

When Ennis brought up the issue of Prop. 218 at the Dec. 7 state water board hearing, Potter, who operates in Tulare County, said the rules may not be as stiff as Ennis thinks.

“Prop. 218 is a fairly complex process about how rates are set for customers of public water systems,” Potter said. “This is something that can be worked out in the agreement phase, whether it be a voluntary or mandatory situation. There will be an engineering analysis done on the infrastructure needs and what is being installed for both systems. Those kinds of things come into play.”

The state has given Exeter and Tooleville six months to hash out a voluntary consolidation, made clear in an Aug. 23 letter to both parties. If negotiations fail, the residents of Tooleville have another option to pursue mandatory consolidation through state Senate majority whip Lena Gonzalez’s SB-403, a proactive water solutions bill Governor Gavin Newsom recently signed into law during a trip to Tulare County.

The bill, among other revisions, arms water districts and the state with the tools to take proactive measures in consolidating “at risk” water systems serving disadvantaged communities to a more dependable water supply. Caitlin Juarez, an engineer with the State Water Board, said Tooleville meets the requirements of SB-403.

“The state water board has determined that Tooleville is at risk of consistently failing to provide an adequate supply of safe and affordable drinking water to its customers.” Juarez said.