TULARE –  The Tulare Local Health Care District has been unable to find a candidate to fill the District 1 board vacancy left by now-CEO Phil Smith within the 60-day timeframe.

The task now moves up the chain of command to the Tulare County Board of Supervisors. If they cannot find a suitable candidate, the hospital district would need to pay for a special election. It just so happens there’s a big election coming up in November, which hospital district counsel Jason Howard said could work in the district’s favor.

“If the Board of Supervisors takes no action, the district is required to hold an election to fill the position,” Howard said at the Jan. 26 board meeting. “Based on the election timing rules, that effectively puts you out to the November election anyways.”

The hospital district has placed ads, sent out flyers and taken to social media to invite applicants to fill the District 1 vacancy, but have not had any bites. At the Jan. 26 hospital district board meeting, Board President Kevin Northcraft said part of the struggle in finding volunteers is the law firm going out of their way to remove sitting board members for “imaginary problems.”

That law firm is the Law Offices of Melo & Sarsfield, whose legal threats led to city councilmember Steve Harrell’s resignation from the hospital district board last year. Melo & Sarsfield’s letter said he was in violation of state law by simultaneously holding elected offices with the city of Tulare and the hospital district. Attorney Maggie Melo said when they examine potential conflicts of interest, they look for service on multiple boards with intersecting jurisdictional lines, and they look at past decisions that may indicate a conflict of interest.

“When we’re looking at sitting board members and how they’re doing their jobs, we look for splits in loyalty,” Melo said. “There are legal conflicts: government code 1090 violations, better known as insider dealing, where you give contracts to yourself or members of your family and things of that sort. Those can be prosecuted by the District Attorney’s office.”

Melo would know, as she spent the end of her 11-year stint with the Tulare County District Attorney’s Office running a white collar crime unit, where it was her job to bring charges against individuals engaged in insider dealing. She said the second type is not so cut-and-dry.

“The second is the de facto conflict of interest,” Melo said. “The person is in such a position that they owe a duty of loyalty to more than one entity in conflict with each other.”

The second type utilizes a quo warranto—a legal device and Latin for ‘by what authority is an office, right or power held’—enabling private citizens to force someone sitting on conflicting boards to choose one. Melo said quo warranto law actually stipulates the individual must remain seated on the board they were most recently elected to, but their law office gives conflicted board members their choice.

One of the criticisms about these rules and regulations—as Tulare citizens would hear who attend hospital district meetings—is the idea that there’s only a handful of people who will engage in these civil responsibilities.

“We want all the community to be able to be involved,” Melo said. “We need to have community members who have undivided loyalty to that particular board that they’re sitting on. We want broad diversity. We don’t want what is happening in Tulare.”

Melo & Sarsfiled have issued complaints similar to Harrell’s about current hospital district board member Xavier Avila, who also serves in an elected seat on the Tulare Cemetery District and happened to be Harrell’s campaign manager in his run for city council. Avila has also been heavily criticized via social media speculation and editorializing commentary by the Valley Voice, where past reputation and extensive coverage of the Benny Benzeevi hospital district scandal has garnered lots of local readership.

“The Valley Voice writes an article about me every week,” Avila said at the Jan. 26 meeting. “I guess not everybody wants that attention.” 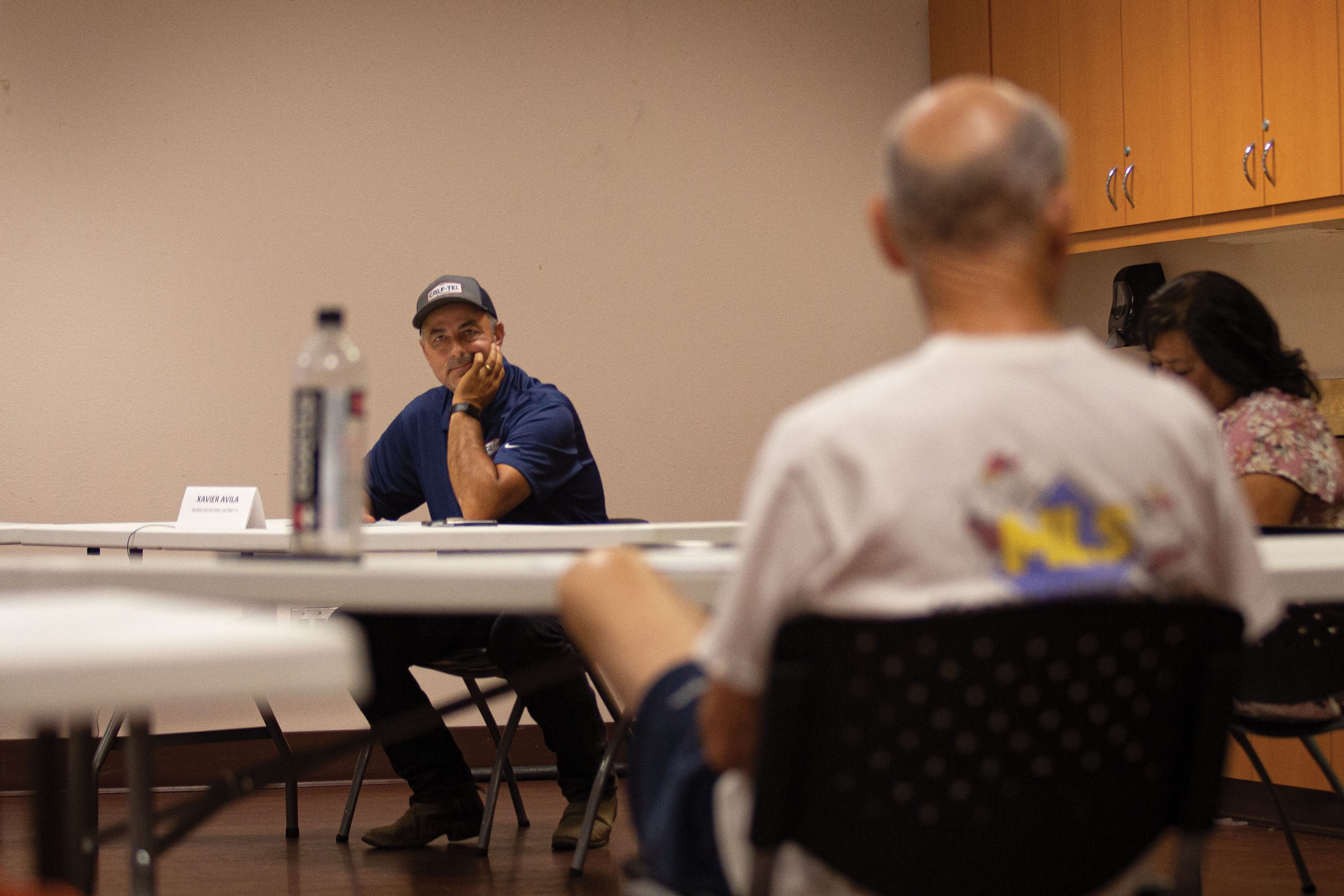 Xavier Avila sits on two different boards within Tulare and has been the target of editorialized comments from local news outlets, but also the target of Melo & Sarsfield who contend he cannot serve both board. - Photo by Ben Irwin

Melo said she believes the problem is not in the lack of interest in public service, but Tulare’s tightly wound web of influence.

“I think the problem is that you have these people who basically run the entire city,” Melo said. “You have all these people who just play musical chairs with board seats. A lot of people [who may want to run] think it’s just a waste of their time. By having one person holding two or three board seats, that discourages others from participating in the process.”

But Tulare is not without options for residents interested in public service but unsure where to start.

The Tulare Chamber of Commerce has offered their Leadership Tulare class for 30 years running, where chamber CEO Donnette Silva Carter said participants learn more about the community and look at future leadership options.

“They learn about all of the different elements that impact our community, from healthcare to education, economic development, workforce development and government in addition to their leadership training,” Silva Carter said. “Some people have used the program as a stepping stone to get into local government.”

“Governmental Affairs Committee meetings are an opportunity to hear from elected officials and representatives,” Silva Carter said. “City council and the hospital district are on there as reporting entities. Our school districts are on there. The Downtown Association and the county ag commissioner and then other elected officials like [Shannon] Grove’s office, [Kevin] McCarthy’s office and the 22nd Congressional District office. There’s also speakers that come and talk on different topics.”