VISALIA – The Tulare County Agricultural Commissioner announced the promotion for one of their inspectors, Samuel Conant, who is now serving as the deputy agricultural commissioner and sealer.

Conant was promoted to serve as the deputy agricultural commissioner and sealer by Ag Commissioner Tom Tucker, which was announced on Sept. 19. Conant is the former Agricultural and Standards Inspector for the ag commissioner’s office.

“I am quite proud to offer Sam this position in my department because I know he has earned it,” Tucker said. “He has worked hard at doing his job and learning the many aspects of serving the industries we support and regulate. Not to mention completing all the necessary certifications and licenses.” 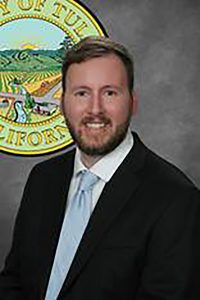 With his new role, Conant is in charge of the division for pest detection, management and crop statistics and took up his new role immediately. He will oversee staff performing detection trapping for invasive and exotic pests. In the division, staff will perform management of noxious weeds harmful to things like public and agricultural safety, management of quarantining insects not native or harmful to the county and also enforce the Asian Citrus Psyllid (ACP) Bulk Citrus Safeguarding program. According to Tucker, Conant will oversee the division as they set traps and take measures for keeping unwanted insects, like the citrus tree killing ACP, from taking establishment in the county.

“We’re happy that he’s made this change, and we know he’s going to do a great job,” Tucker said.

With Conant’s direction, the division is also tasked with assembling and finishing the Crop and Livestock Report every year for the department.

“I am excited to start my new role as the deputy agricultural commissioner and sealer [and take] charge of the pest detection, management and crop statistics division for Tulare County,” Conant said. “I am honored to serve Tulare County and the community.”

Although born in Maine, Conant grew up primarily in Willamette Valley in Oregon. He attended Oregon State University where he earned his Bachelors of Food Science and Technology. He currently resides in Visalia with his partner, Veronia, and their two children, Henry and Madeline.