VISALIA –  Owners of Component Coffee Lab snatched up the Revue coffee shop in Fresno this month, and co-owner Jonathan Anderson said the team is pouring over with ideas for a refreshed drink and breakfast menu.

It’s been four years since Component Coffee Lab opened its plant-loving, coffee-roasting doors. Yet, the owners of Component Coffee Lab just announced they are opening their third location, which will be nestled in Fresno’s Tower District. It will take the place of Revue Coffee Bar.

“There’s a long history of that coffee shop being there, and I definitely have a ton of respect for the community,” Anderson said. “The biggest change that people [will] see is the addition of breakfast and food items, and some menu options that they might have really grown accustomed to.”

Surrounded by his beloved plants, community and roasted coffee beans, Anderson said that Component Coffee Lab is a place where he wants people to feel they belong. He hopes to bring that same tight-knit energy to the Revue location.

“I like the idea of walking in and shaking somebody’s hands, and saying hi to so many people,” Anderson said. “It’s as simple as a smile, or learning someone’s name that you’ve seen for the fourth time that is brand new to you. We try to teach that to our staff that there’s new people that come in every day, and everyone deserves a place to be known.”

The owners of the Revue approached Anderson and the rest of the ownership team about buying the shop during the middle of the pandemic. Anderson said that the timing just wasn’t right to buy up another shop, so they declined. However, this year was different. Component Coffee Lab’s owners decided to purchase the Revue and make it their very own.

Anderson said they will be changing the Revue’s name to Component Coffee Lab, adding breakfast food items like avocado toast and other breakfast foods as well as tweaking the drink menu, Anderson said. However, the plants will stay. 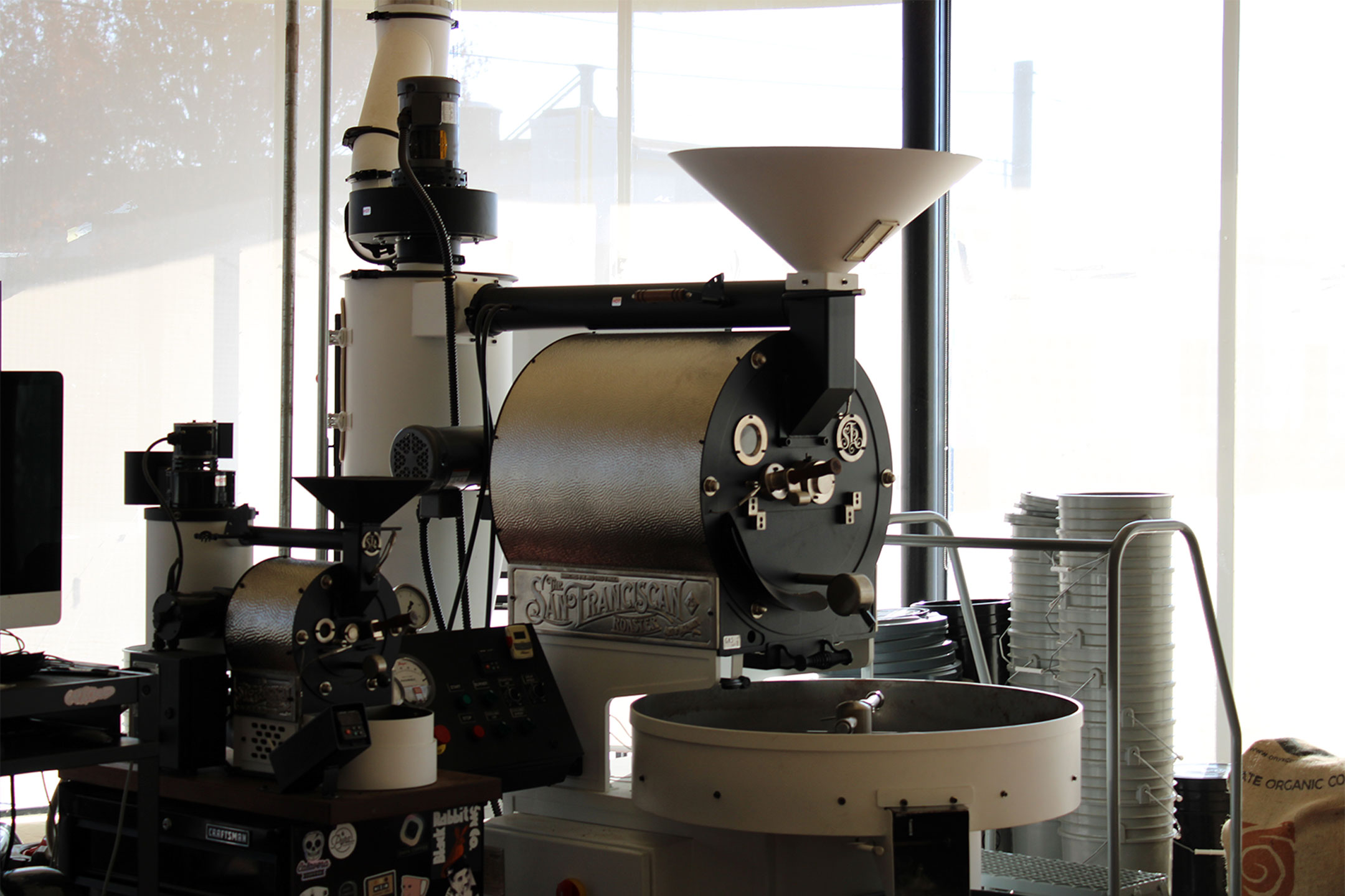 Component's coffee roaster sits inside their newest bean roasting building, where they hope to supply their trademark coffee beans to more local shops and business owners. Photo by Lacey Patrick

“We know that [the Revue] is a very beloved place in the community,” Anderson said. “On the other hand, we also don’t want to have one foot into what used to be the Revue, and the other foot into [Component Coffee Lab]. What we want to do is change the name, and some decor items will change. I mean, the plants are wonderful, though. We’ll keep the plants.”

The Revue already uses Component Coffee Lab’s coffee beans, so Anderson said the change in drinks will be minimal, since the beans are the coffee’s lifeblood. The only difference would be the appliances and techniques used to roast the coffee.

Perhaps one of the biggest differences Component Coffee Lab has, as opposed to coffee behemoth Starbucks, is the money driven corporate structure. Anderson trains his employees and managers to jump in at the cash register when the line is out the door – and it often is – but not push people through the line. Patience at the head of the line gives less than coffee connoisseur the time to actually talk about the product, and having astute baristas allows Component Coffee Lab to maintain their customer service standards even when people continue filing in.

Component Coffee Lab isn’t just stopping in Visalia and Fresno, though. They also have a location popping up in Tulare soon, and will be serving up coffee alongside Quesadilla Gorilla. It is a brand new building off of Lealand Avenue and Hillman Street. The two shops will be closely intertwined, with coffee and donuts being served on one side, and gorilla-sized quesadillas being served on the other. There won’t be any breakfast other than donuts, though, because Anderson said he doesn’t just want a “cookie-cutter” coffee shop. He wants each one to have a unique twist.

The Tulare location’s main attraction will be its outdoor patio seating, a concept that is threaded throughout many of Anderson’s visionary businesses. In the same nature, Anderson had his hands in the conceptualization and management of the Elderwood Rooftop Restaurant that sits atop the Darling Hotel. The outdoor seating creates a whole new atmosphere, which is even a detail that is seen at Component Coffee Lab.

Though it’s no secret that Component Coffee Lab is spreading its wings throughout the Valley, Anderson said he wants to avoid becoming a typical franchise, and hopes to keep it small and semi-local. It’s vital to Anderson that there is a community-driven atmosphere to his coffee shop, and fears that if the company grows too large, he could lose that. He enjoys being able to walk into the shop and recognize the customers.

“I don’t want to create a system where I lose that factor of walking in and saying hi to people, and seeing a recognizable face,” Anderson said. “If I don’t protect that, [I lose] a key factor that keeps people coming. It’s just the idea that someone’s here consistently, saying hi to them, and projecting that customer service that we value so highly.”

Another endeavor that Anderson and his team hope to achieve is turning their newly owned roastery building, which is just down the street from their Visalia location, into a type of grocery outlet, where businesses can subscribe and receive their roasted coffee products. It’s still in its planning phases, but Anderson said he hopes that it will even be open to the public one day, too.

“If somebody’s interested in having coffee that is specifically roasted for them, or even labeled specifically for them, we could do that now,” Anderson said. “We’re looking forward to being a big kind of one stop shop for espresso beans, we can sell equipment as well, and help people get their shop kind of up and running and spruced up.”