Superior Grocers opens their 71st location on the westside of Tulare, once again provides residents with a grocery store

TULARE – After the westside of Tulare was without a grocery store for over a month, Superior Grocers finally opened its doors to the community waiting outside on a rainy day early in December.

On Dec. 3, members of the community lined up in the rain to be the first customers in the westside’s newest store, Superior Grocers. The new grocer took the spot of the former Palace Food Depot, located at 115 S. West St., which before it closed in August, was the Westside’s only grocery store. Superior Grocer is a southern California based store and the Tulare branch was the 71st and furthest north location to open.

“Obviously there [was] a lot of historical and community relationships with the Palace Food Depot that went back many decades,” Tulare city councilman Jose Sigala said. “We’re now glad to be able to welcome Superior Grocers and hopefully have a long lasting relationship with our community.”

The new grocery store features a large selection of produce, grocery, beer and wine and meat. According to a press release from the company, they also have plans underway for the addition of a full service kitchen, bakery and tortillaria. Superior Grocers took a little over a month to renovate the building and turn it into a store of their own.

Councilwoman Terry Sayer said it is a “lovely market” with comparable prices for the type of food she buys. She said the group did a wonderful job of renovating the building. However, the community went without a grocery store for over a month and Sigala said he is grateful to have a grocery store open up once again for residents.

“For me, the one thing besides their willingness to invest in the west side, is that we now have a grocery store, and ever since [it opened, the parking lot] has been pretty full.” Sigala said. “That to me is an indication of how important having that store reopen is for the community.”

Superior Grocers is one of the largest independently owned chain of grocery stores in Southern California. At the grand opening, the store was greeted with community members excited to experience a new store. The store in turn showed their support for the community by providing donations to two community resources before the ribbon cutting.

“We are very excited to open and join the community of Tulare,” Wardwell said. “We are honored to serve the Central Valley with quality, variety and value as they have welcomed us with open arms.” 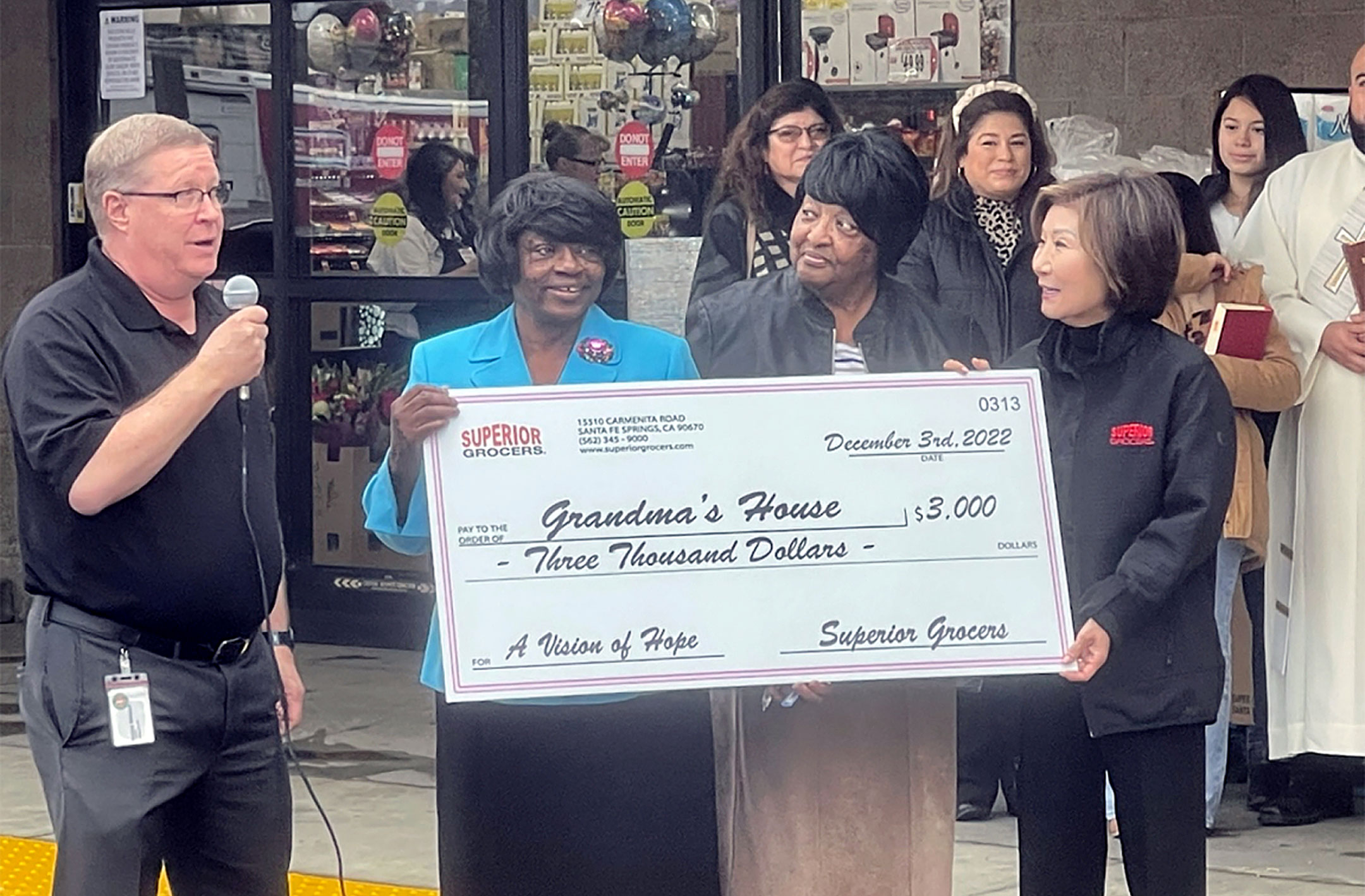 Superior Grocers returned the favor of community support, by supporting a few community organizations. They donated $3,000 to Grandma's House as well as Tulare City Schools. Photo by submitted

According to the press release, Superior Grocers is a strong community partner and continually supports programs that help bring a positive impact to its customers, including education, health awareness efforts and many local youth organizations and non-profit groups.

Superior began its operations in 1981 with one store and has experienced steady growth for over 41 years. Sayer said Superior Grocer is looking to open their next store in Dinuba. Aside from its wide assortment of grocery, produce, meat, bakery, frozen, deli, international foods and general merchandise products, Superior stores also offer a variety of freshly prepared products in the bakery, meat and seafood, service deli and hot foods departments.

Sigala said the immediate success of this grocery store is an indication of the need for himself and Sayer and the council to continue to advocate for businesses on the Westside.

“The bigger bigger picture for me…was that we’ve been advocating as best we can to try to encourage development on the west side,” Sigala said. “And given the limited amount of land that’s shown for commercial [use], everything we can do to encourage that is good, so we are glad that they stepped in.”