EXETER– When weighing a new sales tax, now titled Measure P on the ballot, residents in Exeter said better roads was their main priority. As of late, they are getting a taste of what may be to come.

Construction crews have been busy replacing ADA walkways along Palm between G Street and Highway 65. All in preparation for a full repaved Palm Avenue currently compromised with rivets and potholes from trucks coming to and from the Exeter Specialties packinghouse.

But Palm is not the only project residents have been looking forward to. Last Tuesday, the Exeter City Council approved a general contractor and construction manager to finally repave Visalia Road. The council settled on Yarbs Grading and Paving from Fresno to take on the Visalia Road project from Jacobs Place to Orange. The $4.1 million contract wil be funded by Measure R.

The city will have to spend $170,000 of their own money from the sewer fund in order to relocate a lift station that sits under the Visalia Road and Belmont intersection. But that is only 50% of the total cost with Measure R picking up the rest. City manager Adam Ennis said the city has had trouble with this lift station for quite a while and was hoping to replace it. Before any new pavement hits the ground the city will move the lift station to the corner near Bank of the Sierra.

“I think it’ll be great. If you’ve driven down that road toward Visalia I’ve tried to avoid the cracks and pot holes…this will be really nice,” Sally said. 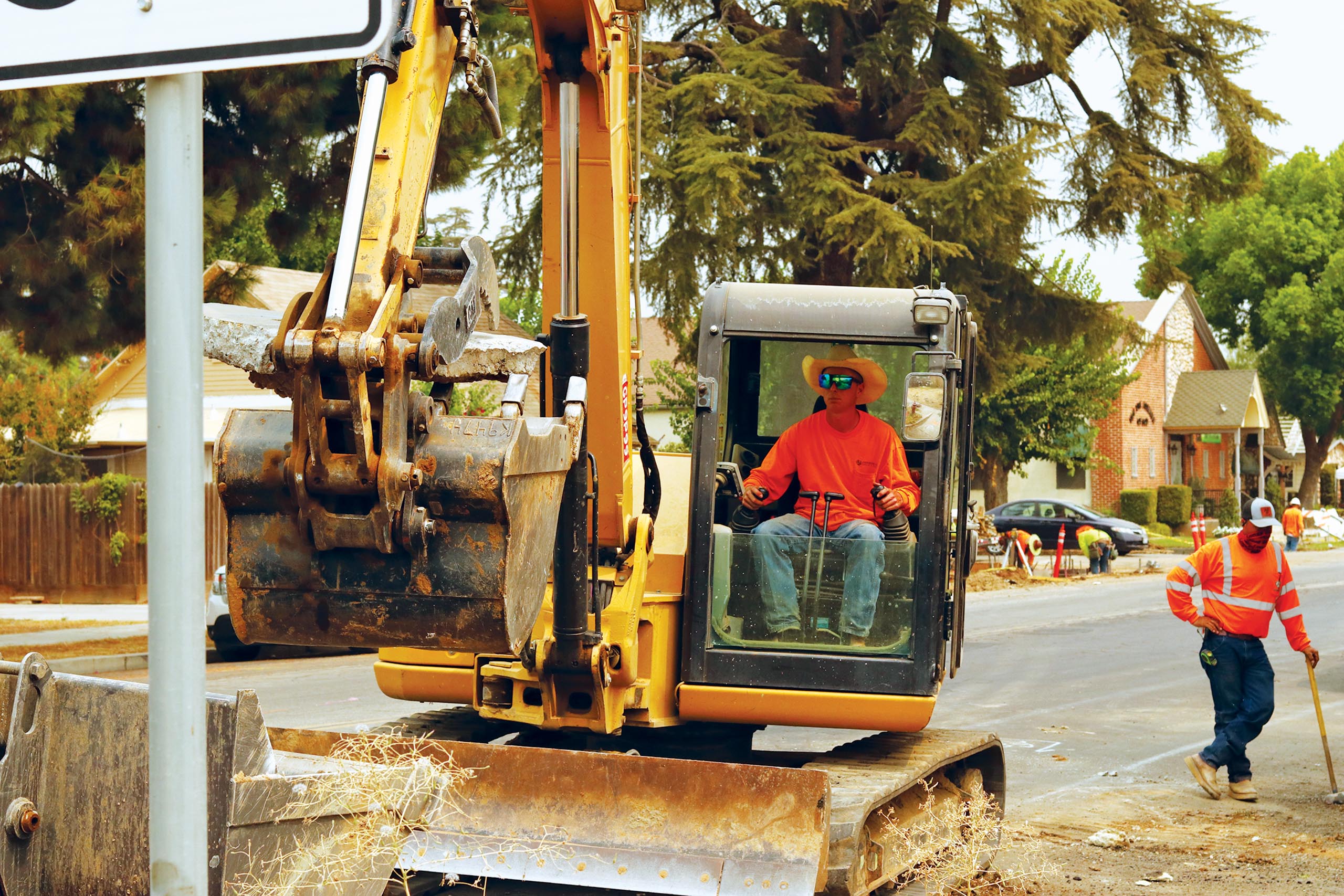 Construction crews on Palm Avenue have been working toward renovating ADA corners in preparation for a full repavement between G Street and Kaweah Avenue. Last week the Exeter City Council also decided on a contractor to renovate the long awaited Visalia Road widening project.Photo by Paul Myers

Public works director Daymon Qualls was elated to finally have a contractor on the project to get the wheels in motion.

The Exeter City Council also decided on 4 Creeks from Visalia to manage the construction project. They are already managing the Palm Avenue renovation.

The only set back on the project is that it doesn’t go far enough. When the Tulare County Association of Government’s began dolling out Measure R funds for the Road 280 widening project from Highway 99 through Exeter the plan was for the city to repave the road from Elberta on the west side of town to Orange.

When the designers were done with the plan, it became clear that the city would not have enough to pave the entire stretch of road. Ennis said that the city and county will have to reevaluate whether to pave it in a second phase of the project, or the county could pave that section of road as an add on to the job they have planned for the stretch of road between Farmersville and Exeter.

Things aren’t necessarily smooth on the Palm Avenue project either. The city council took up an item last Tuesday to remedy a Southern California Gas Company high pressure line that runs on F Street across Palm and to the Exeter Chamber of Commerce building. Oddly enough it only services the one building.

Ennis said the line is too shallow to pave over as the new pavement will be laid deeper than where the high pressure line sits now. As a result the city council approved a resolution granting a 10 foot wide easement to the gas company to bore a medium pressure gas main from the alleyway behind city hall and under the sidewalk along the south side of the city owned parking lot to the chamber building.

It is uncertain when paving will start for either project. Ennis said that paving Visalia Road may begin next spring once all of the required underground and road widening work is complete. This includes new walkways and new street light poles to accommodate the new width of the intersection. He added that paving in the winter is not ideal because of the possibility of rain, and asphalt becomes difficult to work with under 50 degrees.