TULARE COUNTY – The state of Tulare County government is strong financially, despite operating during the worst global pandemic in modern history, but socially, Tulare County residents remain politically divided, traumatized by high mortality rates, and thirsty for enough water to drink without getting sick.

Amy Shuklian, chair of the Tulare County Board of Supervisors, delivered a state of the county address at a luncheon hosted by the Visalia Chamber of Commerce on Aug. 26. The address came as new cases per day reached 39.8, the highest since Feb. 1, COVID-19 hospitalizations climbed to 166, the highest since Jan. 21, available ICU beds have dropped to nearly one-third and 10 people died from COVID in the week leading up the event.

Shuklian, a stand-up comedian on the side, was able to add levity to the event, a first for many in the community since gatherings outside of households were shut down last March. She joked about the current rise in cases, vaccine hesitancy, and the divide over masking.

“You’ll all be receiving a vaccine on your way out the door today,” Shuklian said. “Just kidding, it was in the food you already ate!” 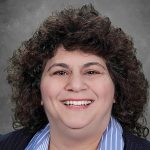 The board chair presented the county’s current budget as strong and bolstered by nearly $100 million in COVID-19 relief funding from the federal government in the last year with another $45 million on the way. The county has already received half of its $90 million share of the American Rescue Plan Act (ARPA) funds, the $1.9 trillion COVID-19 package devoted to helping communities, cities and counties battle the virus and its increasingly deadly delta variant. Last month, the board of supervisors adopted a spending plan for the funding with priorities for transformational programs, equitable outcomes for residents, and shovel-ready projects. She went on to mention $1 million for each hospital, money to support memorial districts, which oversee community centers known as memorial buildings, as well as museums, tourism entities and nonprofits and $8.2 million in projects planned for county parks.

“We want to provide opportunities to make a transformative and lasting impact,” Shuklian said.

Shuklian recapped the county’s expenditures from the $2 trillion Coronavirus Aid, Relief, and Economic Security (CARES) Act of 2020. Tulare County was granted just under $49 million in CARES Act funding to reimburse itself for costs associated with its response to COVID-19. A large portion of the funding ($14 million) went toward salaries and benefits for county employees, more than $7 million each in small business support and telework equipment, just over $6 million on personal protective equipment and hand sanitizer and disinfectant, $3 million in testing and contact tracing and $2 million each for rental and utility assistance as well as health care support.

While homelessness remains one of Shuklian’s areas of focus as board chair, the drought choking the western United States and Tulare County has taken precedence. Tooleville east of Exeter is down to one well and has received deliveries of bottled water continuously since the last drought due to contaminants such as nitrates and hexavalent chromium. While the county seems content to sit on the sidelines in Tooleville, the state has ordered a mandatory consolidation with the city of Exeter about a mile away. The county was able to react quickly to the community of Teviston off Highway 99 and was able to repair its water pump just a month after the it failed thanks to partnerships formed during the last drought with the state and Self-Help Enterprises.

“We learned a lot in the 2012-16 drought in connecting smaller systems to larger systems,” she said, noting projects like East Porterville where more than 3,000 homes in the unincorporated community tied into the city of Porterville’s water system. The county was also able to consolidate Monson with nearby Sultana, build a new water system in Oakieville and a connect a collection of homes on Avenue 322 and Tract 92 to California Water Service’s Visalia district, and connect Matheny Tract to the city of Tulare’s water system.

Tulare County’s drought situation is synonymous with its wildfire situation. SQF Complex Fire scorched more than 175,000 acres in the Sequoia National Forest, which is the epicenter for the tree mortality issue in California’s forests. What started as a lightning strike in a remote area near Kernville grew to become the largest wildfire in Tulare County history, destroying 232 structures but luckily there were no firefighters or civilian fatalities.

This wildfire season has already begun but the county is making strides in its response. The county has constructed a new public safety dispatch center in the Cigna building, which was formerly located in a trailer in Mooney Grove Park for the last 14 years, and has purchased 11 new fire trucks through a low-interest, $8.7 million loan which will cost the county $1.8 million each year for the next five years.

Looking to the future, Shuklian said she didn’t know if the state would mandate another shutdown but did say the county would be more prepared to work remotely without major interruptions to services. The county has purchased additional laptops to expand its telework capabilities, an online park reservation system for arbors, and increased use of cloud-based software, such as programs for email, meeting agendas, financial management, permitting, training and a case management system or the District Attorney’s Office.

Shuklian also promised to continue full, live broadcasts of the supervisor meetings even after the pandemic ends as an option to engage more residents, if she has it her way. “I think it is important for transparency and accessibility.”