Following a robbery of Wells Fargo Bank in Tulare, the Police Department is following some leads while still searching for the suspect

TULARE – After a robbery on Monday at the Wells Fargo bank in Tulare, police have not yet found the suspected woman who got away with an undisclosed amount of money. 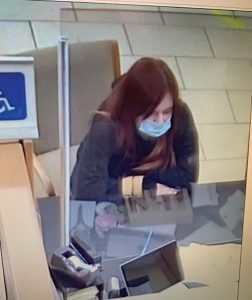 According to the police department, on Monday, April 18, around 2 p.m. police responded to a report of a robbery from Wells Fargo Bank at 229 E Tulare Ave. The suspect, said to be a white female in her late twenties or early thirties, handed the bank teller a handwritten note demanding money. The note also advised the teller she was armed, but no weapons were seen.

The suspect was further described as having red or auburn colored hair, 5 feet 2 inches tall and approximately 150 pounds. She was wearing a black shirt and a surgical mask at the time of the robbery. She left the business with an undisclosed amount of money and was last seen in a southbound direction. Detectives and Evidence Technicians were called to the scene to investigate.

According to Sgt. Edward Hinojosa, public information officer for TPD, the police department is currently “following up on some leads.”