VISALIA – Brian Poochigian will start his second term this time at the center of dais as he takes over for Steve Nelsen as mayor. With his change of seat will come a slightly different direction as Poochigian plans to emphasize public outreach among his list of priorities.

At the Dec. 6 Visalia City Council meeting, councilmember Liz Wynn nominated former vice mayor Brian Poochigian to take over for Nelsen as mayor. After reelection in November, Poochigian has many items on his priority list, but at the top, he aims to improve public outreach. He said the council’s job is to work for the people, so it is important to hear what they have to say. 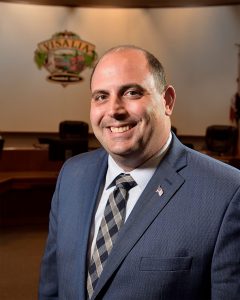 “If there’s a problem or there’s something [residents] don’t like in the city, [they] need to bring it to our attention because that’s how we figure it out,” Poochigian said. “It’s my hope and this year what I really want to work on is responsiveness, getting back to residents and really just engaging with the community.”

Since he was in high school, Poochigian said his friends would tell him that one day he “would be the mayor of this town,” and now he has. Wynn said she nominated Poochigian because he is involved in the community, he is good with business and has great leadership skills.

“I’m excited for the next two years. There’s going to be a lot going on in Visalia, with the new Civic Center and other issues coming up,” Wynn said. “I’m excited to serve and I think Brian will be a great leader for the group.”

Since he was first elected in 2018, Poochigian said he is grateful to have been able to spend so much time with many “Visalia legends.” He said he was able to learn a lot from those he served on the council with, even if only for a short time.

“There was a lot of institutional knowledge that I got to learn from right when I got on, which I was really appreciative of,” Poohcigian said. “I learned a lot from those guys and I think I was very lucky to come on when I did.”

Poochigian continues to build on that institutional knowledge as he begins his next four years. As the council plans to improve public outreach, Poochigian aims to make it more personal. His goal is to have monthly meetings, or “meet and greets”  between council members and residents to hear more specifically what is needed throughout the community. The regular interaction with members of the community will create the opportunity to present any questions, comments or concerns they have throughout their city.

Additionally Poochigian aims to improve the council’s presence on social media. He sees it as another way to receive input from the community as well as an outlet for the public to receive important information about the city.

“We’re working here for the residents,” Poochigian said. “I want to give [the community] as many opportunities as possible to tell us, what’s going right or what’s going wrong.”

Currently one way the city does receive community input is through the city’s annual public opinion survey. Poochigian said roads and infrastructure is an area that is usually high on the public opinion survey, as well as a passion of his own. In the next few years, he said the council needs “laser focus on our roads.” He also will continue to work with the community on the ever present issue of homelessness.

Nelsen said that historically, the previous vice mayor became the new mayor. It comes with the reorganization of the council that happens every two years. Poochigian nominated Brett Taylor to serve next to him as the vice mayor. Poochigian said he nominated Taylor because he saw him as the best fit for the position as he has experience from his time serving on the planning commission.

When Poochigian was first voted onto the council, he was the youngest of the five. Today, he is happy to see more young faces on the council, bringing in a fresh perspective. Emmanuel Soto, who took Greg Collin’s place in district 4, is excited to begin his journey under Poochigian and Taylor’s leadership.

“I like the vision that [Poochigian] has for the city,” Soto said. “I’m going to do my best to do my part and just hope to work with him, and everybody.”

Poochigian is excited for his new adventure and is ready to serve the people and their needs. He plans to carry what he has learned from his past four years and put it to good work.

“The number one thing they all instilled in me is, it’s not about Republicans, it’s not about Democrats. In Visalia, we do what’s best for the community and Visalia has always been a steady ship,” Poochigian said.