The Soft Bigotry of Low Expectations

In a perfect world, every student would graduate from high school with the skills necessary to either enter college or embark on some other career. Unfortunately, we don’t live in a perfect world.

However, the California Department of Education does have a wide ranging composite measurement that establishes the percent of graduates that are “college- and career-ready.” Basically, this indicator identifies students who exceeded basic graduation requirements. The information is available of the “Dashboard” section on their Dataquest web site at dq.cde.ca.gov/dataquest. 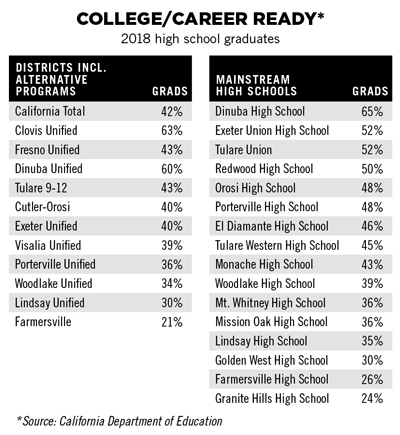 This assessment provides insight into the overall performance of not just students, but also their teachers, school administrators and elected school board members.

The nearby chart shows how Tulare County schools, and a couple of our neighbors, measure up. Clovis Unified, Dinuba Unified, Tulare Union and Fresno Unified were the only Districts that exceeded the state success rate of 42%. But the rankings only tell part of the story. Visalia Unified’s 38.6% success rating was down slightly from 2017. Meanwhile, Fresno Unified’s success rose from 37.4% to 42.9%. Results also improved in Exeter, Dinuba, Lindsay, Orosi and Porterville

This will be my last of 4 columns reviewing various State measurements of success in Tulare County schools. I would like to thank Reggie Ellis, publisher and CEO, plus Paul Myers, editor, of the Sun-Gazette for the opportunity to present the raw numbers and commentary. The charts they included in the columns replaced thousands of words.

Former President George W. Bush occasionally used the expression “the soft bigotry of low expectations.” Interpreted, it means we often look at people or places and an inborn bias causes us to form an unfair expectation of lower results. Studies show that if leaders or instructors have low expectations, the actual results of their followers or students will be lower.

When beginning the research for these columns, I must admit that I did not have high expectations for the results in the poorer communities in our area. It came as a surprise then when Lindsay High School and Visalia’s Redwood High School had nearly identical combined scores on the State administered “Smarter Balanced” test results.

And, today’s chart shows Dinuba High School just blew away the competition when measuring college/career readiness. It appears that leadership expectations are especially high—and are being achieved—in some largely impoverished communities where a high percentage of their students are also classified as “English Learners.”

Former President Bush offered another thought when discussing education in a civil rights forum in 2014. “When we invest taxpayer’s dollars it is only right to insist upon results and when we find poor results, it is only right to blow the whistle on mediocrity.”

Jerrold Jensen is a retired sales manager for an international consumer goods company. After 30 years of assignments in the Southern and Western U.S., he and his wife retired near family in Visalia. He enjoys analyzing data and tries to simplify it for readers before writing his guest columns for Central Valley publications.

This column is not a news article but the opinion of the writer and does not reflect the views of The Foothills Sun-Gazette newspaper.