Lindsay’s production of Newsies the Musical opens on Friday, Jan. 17 at the Lindsay Community Theater

LINDSAY – “Middle school students missing from theatre” might have been a Pulitzer-penned play on words for the lack of 13- to 15-year-olds performing in plays at the Lindsay Community Theater. It was something Alli Smith noticed when she joined the community theater five years ago as an assistant director for The Little Mermaid, Jr. 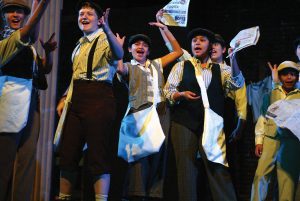 The ensemble performs one of the hit Broadway musical numbers in the play, which opens this Friday in Lindsay. Photo by Reggie Ellis.

“The next year, I directed Willy Wonka Jr. and I quickly realized that there was a whole group of kids who were too old for junior shows and too young for anything else,” Smith said.

That’s when she pitched the idea of doing a teen show and the board of directors was very supportive of the idea. For the first time in over a decade, an all-teen cast of 13 took the stage under Smith’s direction for “Once Upon A Mattress.”

“It was a great start, and the board encouraged me to offer another teen show for this season,” Smith said. “This year our cast nearly tripled.”

Smith is now directing a cast of 34 teens in the community theater’s upcoming production of Newsies the Musical. The 13- to 19-year-olds hail from Porterville, Strathmore and Lindsay and have been with the Lindsay Community Theater since Smith began.

“Lindsay and our surrounding communities are filled with talented young people, they are quick learners and hard workers willing to step out of their comfort zones to put on a show that is truly remarkable,” Smith said. “I’m thrilled to get to help these kids reach their potential, to become better performers and to be able to share their gifts with our audiences.”

“Newsies is a special show. The music is moving and catchy. The characters are funny, relatable and memorable, and the story is still relevant to our time,” Smith said. “It’s a story about self-worth, equality, and the value of hard work, the importance of friendship and loyalty, and taking a stand for what’s right, even when it’s difficult.”

The Broadway play tells the story of the 1899 newsies strike in New York City. The story centers around Jack Kelly, an Irish newspaper delivery boy who, like most of his fellow newsies, is orphaned and homeless. Kelly is played by Connor Craven who said the most challenging part of the production has been learning how to tap dance.

“I am most excited for the penultimate number, “Once and for All,” because of the energy that it brings to the show. It’s a beautiful piece that, when harmonized, explodes into a symphony of voices.”

Assistant director Jennifer Keeton said most of the students had no formal dance training and received 20 hours of instruction over two weekends during a tap class boot camp.

“These kids are ready to entertain,” Keeton said. “They are ready to just go out and leave everything they’ve got on the stage. There are a few musical numbers where you can feel their energy throughout the theater like electricity.”

When Joseph Pulitzer, publisher of the New York World, decides to increase the cost of the newspapers he sells to the newsies from 50 cents per hundred to 60 cents, Jack organizers a strike bolstered by coverage from Katherine Plummer, a female journalist trying to prove her chops in the male-dominated news biz. Plummer is played by Aeva Torres, who can relate to her sassy yet sweet heroine.

“My favorite part of this production is getting to play Katherine and how she is an independent, self-made journalist, who’s also a woman which means that her being successful in the 1890s was looked down upon,” Torres said.

Jack must soon decide what’s more important, the safety of the newsies or their livelihood. Eventually, Jack strikes a deal with Pulitzer to give everyone what they want. Pulitzer is played by Ethan Willett, who, unlike his media mogul character, had no trouble making friends during the production.

“What I really like about the LCT is that it’s very welcoming, and the community is extremely great,” Willett said. “I’ve made several new friends, and I’m not hiding in a corner the whole time backstage. I’m looking forward to coming here again in the future.”