Speakers call for mass protests, walkouts by teachers and students in light of a COVID-19 vaccine school mandate expected to come down from the governor’s office next year; Tulare County superintendent of schools Tim Hire encourages citizens to contact elected representatives to invoke parental choice

EXETER – At least some Tulare County parents felt cut out of their child’s health care decisions after Governor Newsom’s COVID-19 mask mandate. Much less the impending vaccine mandate for students 5-17 years old. And if last Tuesday’s town hall in Exeter is any indication, parents are angry about it. But where to focus that anger is obviously unsettled.

Speakers throughout the night hopscotched across the line of respecting someone’s decision to get the vaccine, and saying the mandate is a form of tyranny in order to perform a “science experiment” on students. Absent, though, was a cohesive message on whether they had distrust in the vaccine, or distrust in the entire system of government. From speaker to speaker, it was one or the other, or a little bit of both. 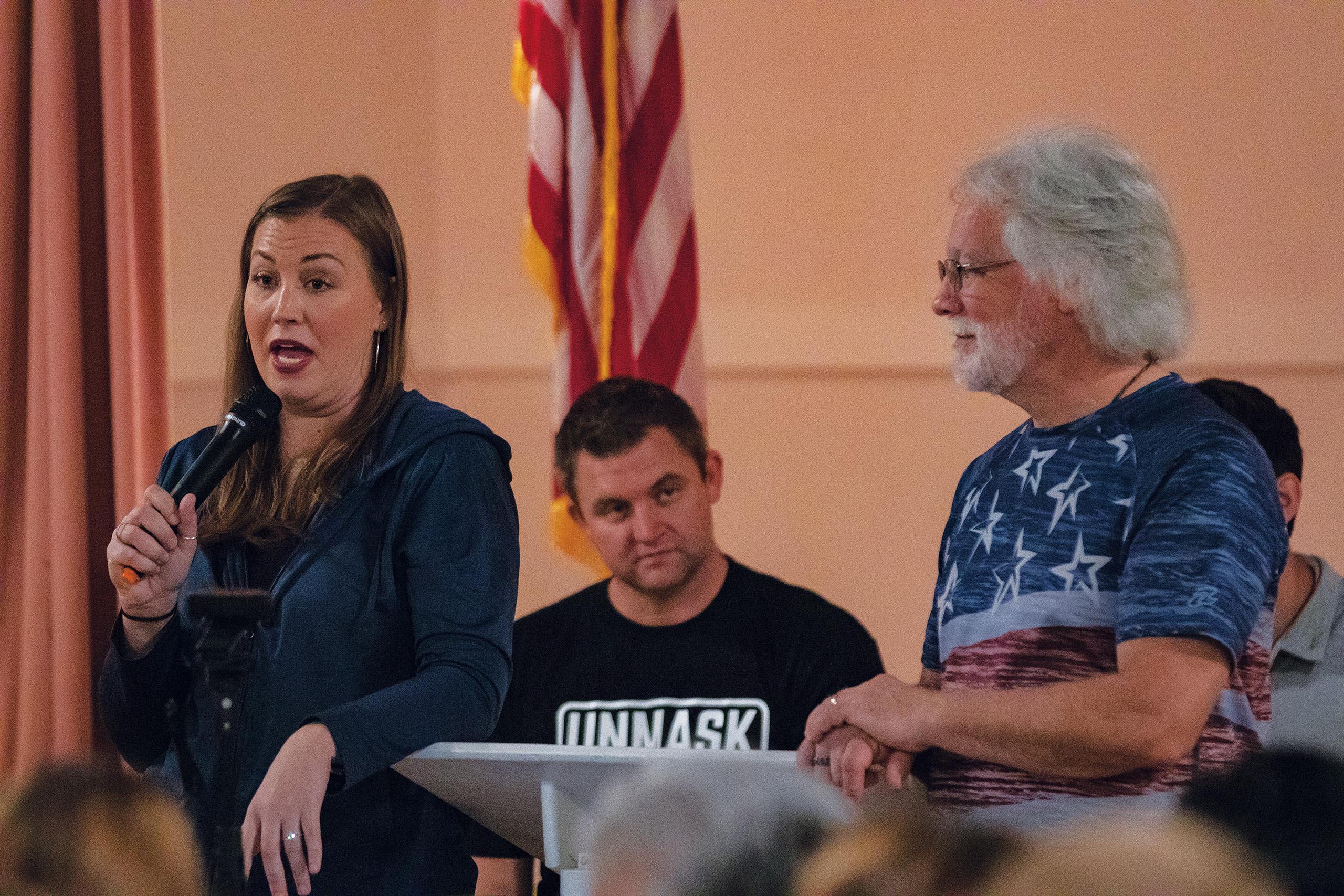 Marilyn and Jimmy Malloy who founded Unmask Tulare County talk about their faith driven initiative to “fight” the mandate and “hold the line.”Photo by Ben Irwin

Among a list of five speakers set to address a crowd of over 100 residents throughout the county who filled the Exeter Women’s Club to capacity on Nov. 2, the only person to cut through the noise was not even on the docket. Tulare County Superintendent of Schools, Tim Hire became the focus of attention during the Q&A session in the last hour of the town hall. Contrary to prepared speakers on the night calling for a “fight” or to build “an army,” Hire encouraged parents and anyone else concerned about a vaccine mandate to reach out to their elected representatives.

“Everyone needs to write to their representatives because that’s the way the system works,” Hire said.

He added in a diplomatic tone that the potential of a vaccine mandate is only a press release from Gov. Newsom’s office. However, he added that he hasn’t seen the governor fail to follow through on a declaration yet.

Hire told the crowd as well that there are two options for a vaccine mandate to reach schools. The first is an order by the Governor to be carried out through the California Department of Public Health (CDPH), and the other is through the legislature, assuming the governor would sign the law. Legislative advisors to Hire and the Tulare County Office of Education (TCOE) indicate that legislative action is unlikely, which is better for parents because the Governor’s orders will most likely have religious and health exemptions for concerned families. Hire said that if the state legislature were to pick it up, there would be little chance that exemptions would be included.

But that did little to quell the crowd. Joseph Beaton stood from his seat and lurched towards Hire in the back the room to yell, “I will never make my kids wear a mask!”

In an interview with The Sun-Gazette, Hire said that state policy in education is not a “one size fits all” solution and acknowledged that makes his job as an advocate for students and teachers difficult. In particular when it comes to such a politically charged issue as the COVID-19 vaccine mandate.

“My job is to try to do what’s best for all kids and all educators in Tulare County…And that’s why I’m an advocate for parental choice,” Hire said. He recognized that he has also received letters and comments from parents who are pushing for a vaccine mandate as well, and he was sympathetic to their plight as some of those parents have lost loved ones to COVID-19.

Last week’s town hall was organized in part by Unmask Tulare County, a budding organization started by Jimmy and Marilyn Malloy. Both spoke as a part of the night’s prepared list of speakers. But Jimmy had reached out to Hire about pushing back against state mandates, in the past.

Not unfamiliar with formally expressing his disagreement with the state, Hire wrote in a letter last year how detrimental it would be for students to go full distance learning during the 2020-2021 school year. In a letter to the state last October, Hire said that distance learning exaggerates inequities in education and leads to learning loss. He added that statistics show that suspected child abuse reporting had significantly declined when schools were shutdown in March 2020 and he added that the number of students going to the hospital for mental health crises was on the rise.

Many of the parents at the town hall threatened to take their children out of school if the vaccine mandate was imposed. If students are not in the classroom, they could face the same dangers students were facing during distanced learning last year. And that hasn’t gone unnoticed by Hire.

“It’s on my mind pretty regularly…yeah, I worry,” Hire said. 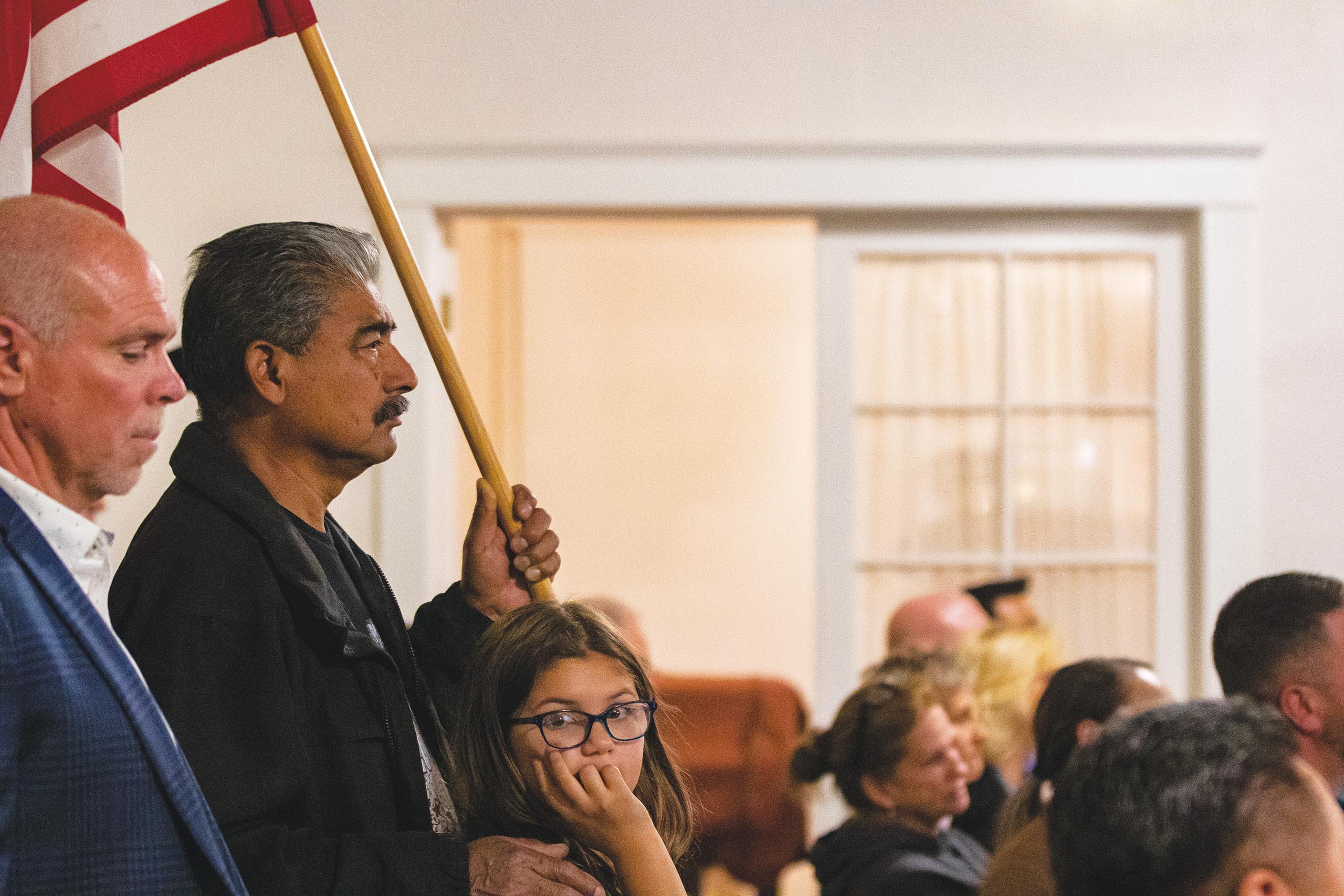 A man in the crowd stands with his young daughter while holding an American flag in the back of the room of the Exeter Women’s Club on Tuesday, Nov. 2.Photo by Ben Irwin

If the vaccine mandate comes down parents will in fact have a choice to make. Hire said if parents are not approved for an exemption, then students will be forced into independent study. But parents certainly have the freedom to choose what they do next. Some parents might take the time to help give the structure of regular class instruction, but others might have to take “the jab” to keep their kids in school so they can go to work.

But this freedom to choose doesn’t seem like much of a choice at all to parents and speakers in the room.

To say that the debate over the vaccine mandate is politically charged would be a woeful understatement. Much of the language at last week’s town hall went well beyond pundit talking points and stretched into the extremely militant.

Jimmy Malloy, the final speaker before the Q&A relied on his Christianity to decide to take up this cause and said, “my faith in Jesus guides everything I do in my life.” He added that God told him to look up and what he saw was “an army rising.” Marilyn, a former Costco Wholesale employee for 15 years quit her job because she was told by God to “fight” the vaccine mandate. She told the crowd that, “we need to hold the line…No more!”

The Malloys’ organization has continued to protest the vaccine mandate and is calling for a local “sit out” and statewide school walkout on their web site.

The first speaker at the town hall was Josh Flowers. Speaking on behalf of the Facebook page and website Blessings of Liberty, Flowers said that he was also stirred to act because of the mask and vaccine mandate. When the mask mandate in schools was announced Flowers said he took a 30-day leave of absence from his job in the fire unit of the California Department of Corrections and Rehabilitation (CDCR). In that time he said he spoke with parents concerned for their child’s well being while wearing masks in school, and feared the threat of a vaccine mandate might have been around the corner.

Now that the COVID-19 vaccine mandate is all but here, Flowers said that he is organizing community members to “fight.”

“We have warriors already in motion taking the fight to the very people who are trying to take your freedoms away,” Flowers said. “We have unified under a banner that we will not comply and there is more power in numbers, and there is definitely power in unity.”

He added that an attorney, Emilliano Martinez, have taken up his case to “take the fight back to the school boards.” The Sun-Gazette reached out to Martinez but he did not return phone calls for comment. School board members all over the county have issued resolutions calling for parental choice over masks, but have no teeth in terms of actual policy making. Not enforcing masks on school campuses is actually a misdemeanor.

Flowers gave way to the most aggressive rhetoric calling for populist movements like teachers striking en mass and students walking out of the classroom. His most striking comment was when he told people that “parents are pledging their lives to stand for children.”

“You’re going to be pushed outside of your comfort zone. But that’s where real lasting change occurs,” Flowers said. “I’m a guy who doesn’t hang out in big crowds. I’m very uncomfortable. But I’m here with you guys, and we have a chance to fight this without bloodshed.” 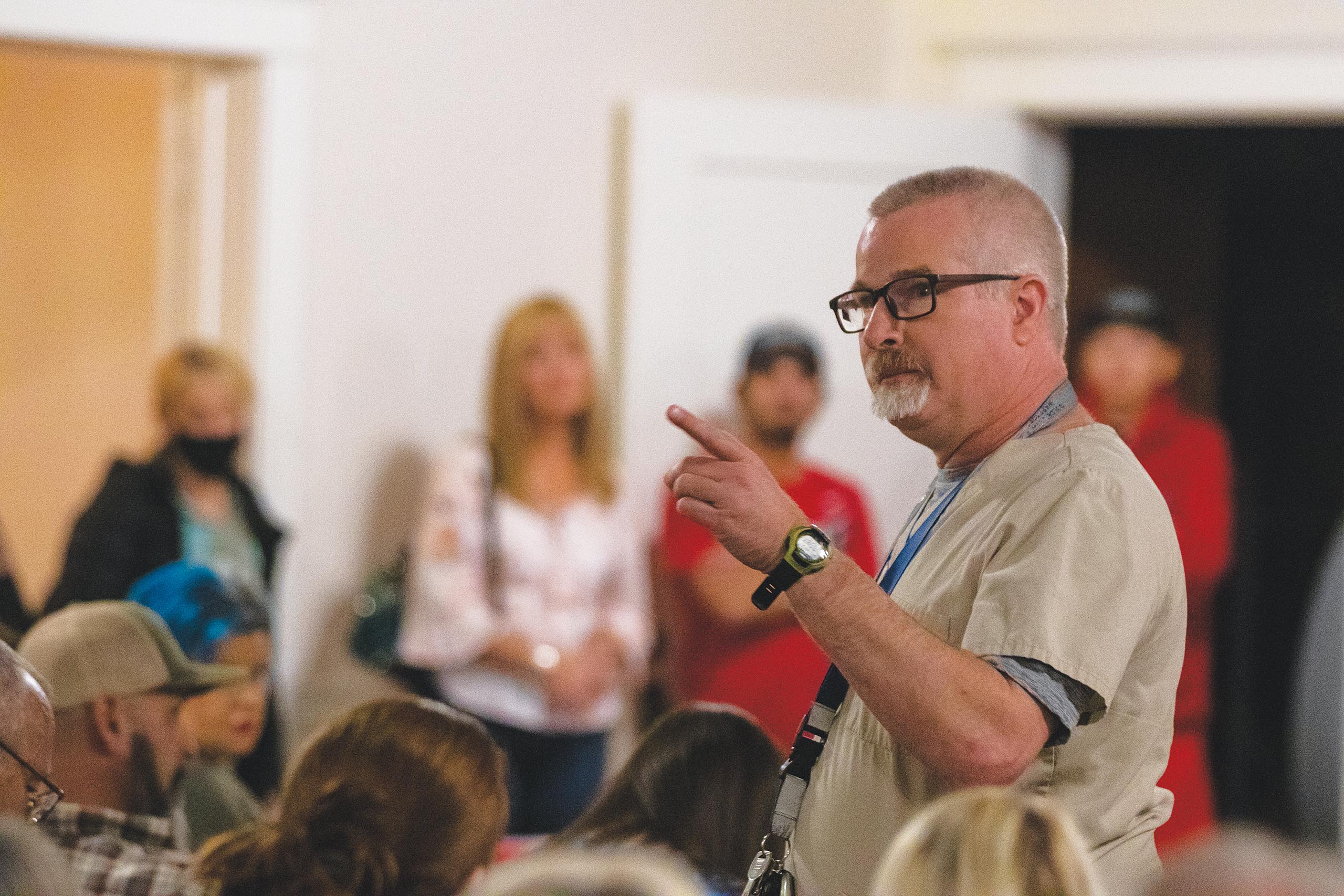 Joseph Beaton points at Tulare County superintendent of schools, Tim Hire after he explains the state’s position on mask and COVID-19 vaccine mandates.Photo by Ben Irwin