FARMERSVILLE – After nearly months of searching, Farmersville Unified has landed on a successor to the recently retired Dr. Paul Sevillano.

The Farmersville’s school board approved the contract with Dr. Sergio Chavez at their Aug. 9 meeting after much anticipation. Dr. Chavez, currently the director of EL/bilingual programs at Santa Ana Unified School District, will begin on Sept. 1.

“The biggest piece right now is to build,” Chavez said. “I want to build on the great things that already exist. I want to listen to the community and all of the educational partners. I want to learn the culture of the district. And I want to be in a position to serve.”

On becoming superintendent, he said, “it’s a natural next step as the epitome of just about anybody that’s serious about education.” 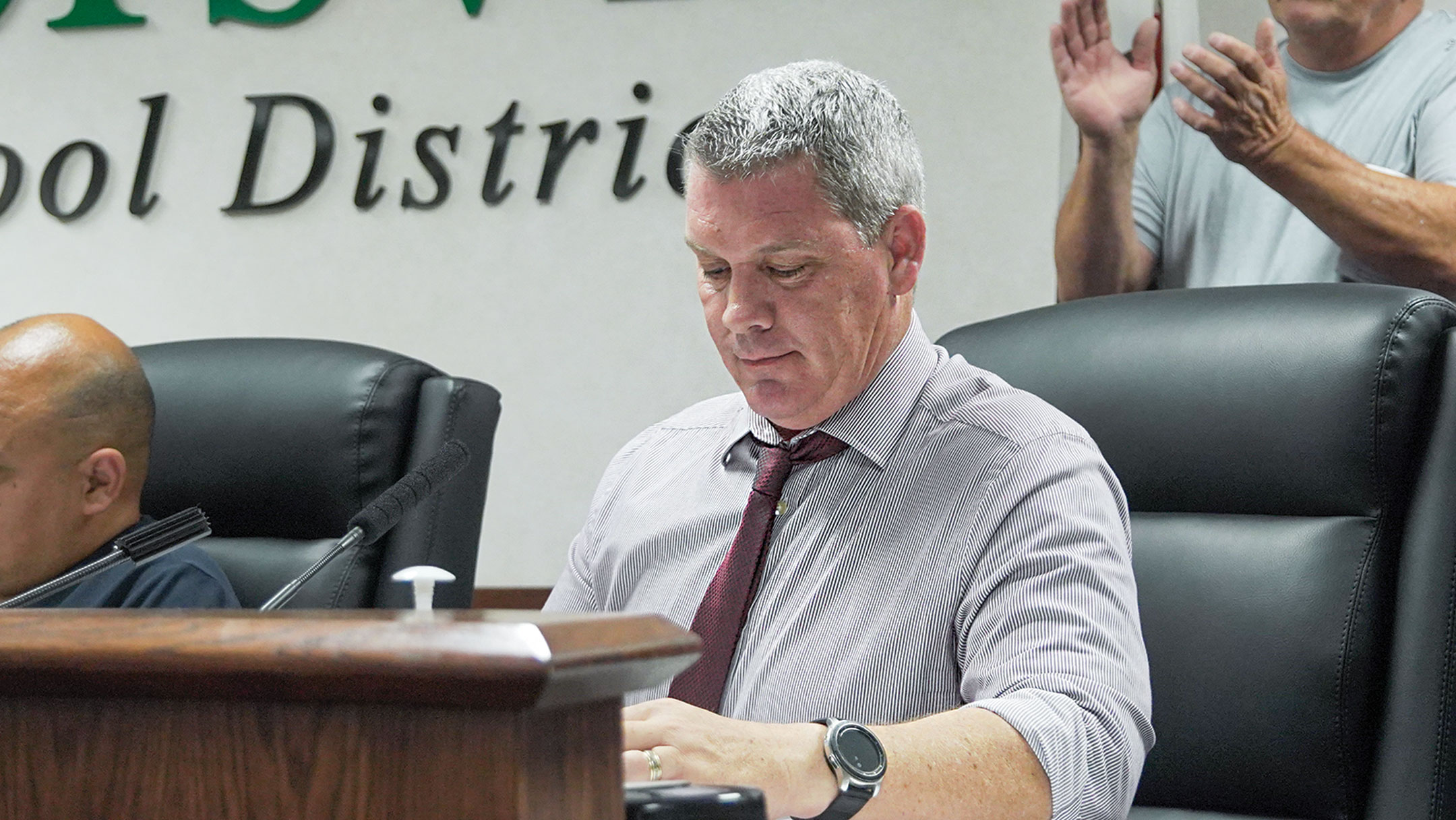 Chavez is indeed serious about education. He believes in creating the best conditions for students to learn by making sure teachers and staff are supported and parents are listened to. He plans to increase communication in all areas of the district. Despite not being officially approved yet, Chavez was present on the first day of school on Aug. 8.

“He connected with all the students as we were visiting classrooms,” said school board president Jorge Vazquez.

On July 16, the school board held a special meeting to interview all candidates. According to school board members, Chavez stuck out among the candidates for his charming personality and commitment to the job.

“We felt that Dr. Chavez had the potential to unite the district and the community,” Wimp said.

Despite not starting until September and still wrapping up his previous position in Santa Ana, Dr. Chavez has been present in Farmersville, getting to know the community and meeting teachers, staff and parents. During public comments at the Aug. 9 meeting before Chavez’s contract was discussed, several members of the public spoke in favor of Chavez.

Nearly 80 people squeezed into the school board chambers at the district office, several of them wearing t-shirts saying ‘FTA Strong’ in favor of the Farmersville Teachers Association. Many public comments expressed frustration with the district: teachers having issues with payroll, parents bringing attention to security problems and advocating for better equipment for the Career and Technical Education (CTE) classes. 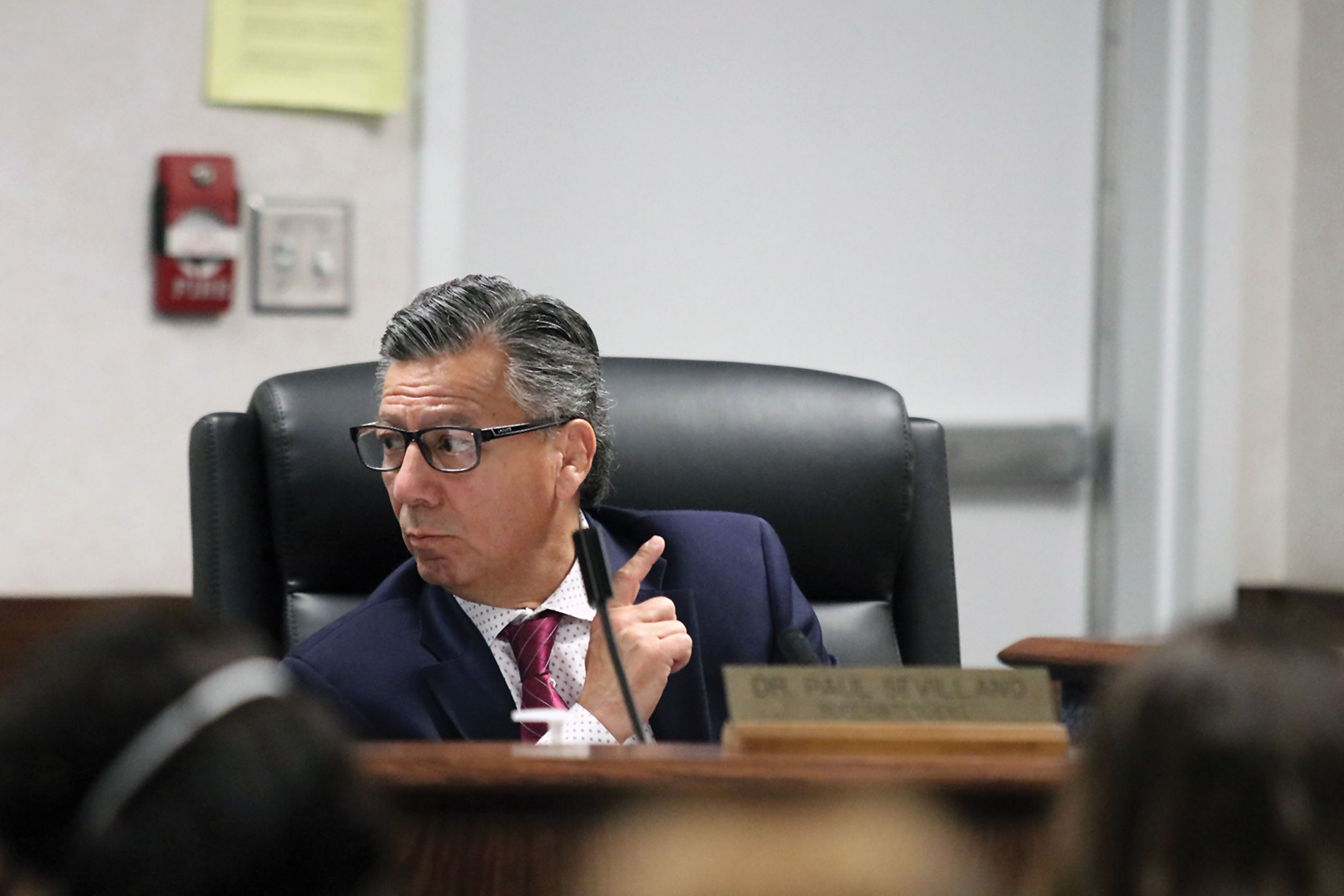 Former Farmersville Unified Superintendent Dr. Paul Sevillano listens to FUSD Trustees during a March 22 school board meeting when teachers aired their grievances about his conduct as superintendent.Photo by Reggie Ellis

“I think a lot of it was coming from people being uncertain of where we were headed,” school board member Isamar Hernandez.

Things were going downhill for Sevillano before his retirement. In March, the California Teacher Association (CTA) filed an Unfair Practice Charge with the Public Employment Relations Board (PERB) against the district and Sevillano. The complaint alleged that the administration allowed a district supervisor to discriminate against a special education teacher who was disciplined after parents complained about her new schedule, which she had warned would cause issues months prior.

The complaint also claimed that Sevillano attempted to interfere with union activities after the teachers association was made aware of the issue. Allegedly he threatened to take action against those who participated in the union.

In addition to the PERB case, negotiations between the teachers union and FUSD reached an impasse in May 2022. Teachers were hoping for wage increases, pointing out that the district did raise administrative salaries last year. According to Sevillano, those salary increases were to correct the deficiency in salary packages for administration, which had previously had one of the lowest salary packages.

The district offered teachers a 4% raise along with full health and welfare benefits, plus a $4,000 stipend for concurrent instruction for the 2022-23 school year in addition to a $4,000 stipend for the 2021-22 year through a separate memorandum of understanding. The teachers union declined the offer, asking for a 5% salary increase instead of 4%. That is when the district filed for an impasse on May 2.

The teachers union and the district reached an agreement in June. Teachers will receive everything previously offered, but with a 4.5% salary increase.