WOODLAKE – Castle Rock fifth graders have built a championship-contending robot after just three months of coding, where they qualified for state championships.

On Nov. 19, the team of six students from Woodlake Castle Rock Elementary School competed in the Central Unified Qualifier robotics competition. After three rounds of tedious challenges, one malfunction and a 30 minute presentation on the coding of their handmade robot, fifth grader Navina Rojas said her team’s hard work paid off.

The group earned themselves a spot to compete at the FIRST Lego League Central California Championship, which is the state’s robotics championships competition. Woodlake residents can show their support on Dec. 17, at the Alta Sierra Intermediate, 380 W. Teague Ave., Clovis, CA 93619, beginning at 9 a.m.

“I actually screamed whenever they told us because I was so happy,” Rojas said. “I couldn’t stop smiling.”

The team was one of eight selected to move onto state championships, after competing against 40 other schools. Rojas was joined by her teammates Klara Poloka, Julian Palafox, Aaliyah Ramirez, Stephanie Terriquez and Khaos Utumapu. For the competition, the student teams built a robot out of Legos and programmed it to run on its own, and the robot had to complete certain “missions” by itself. 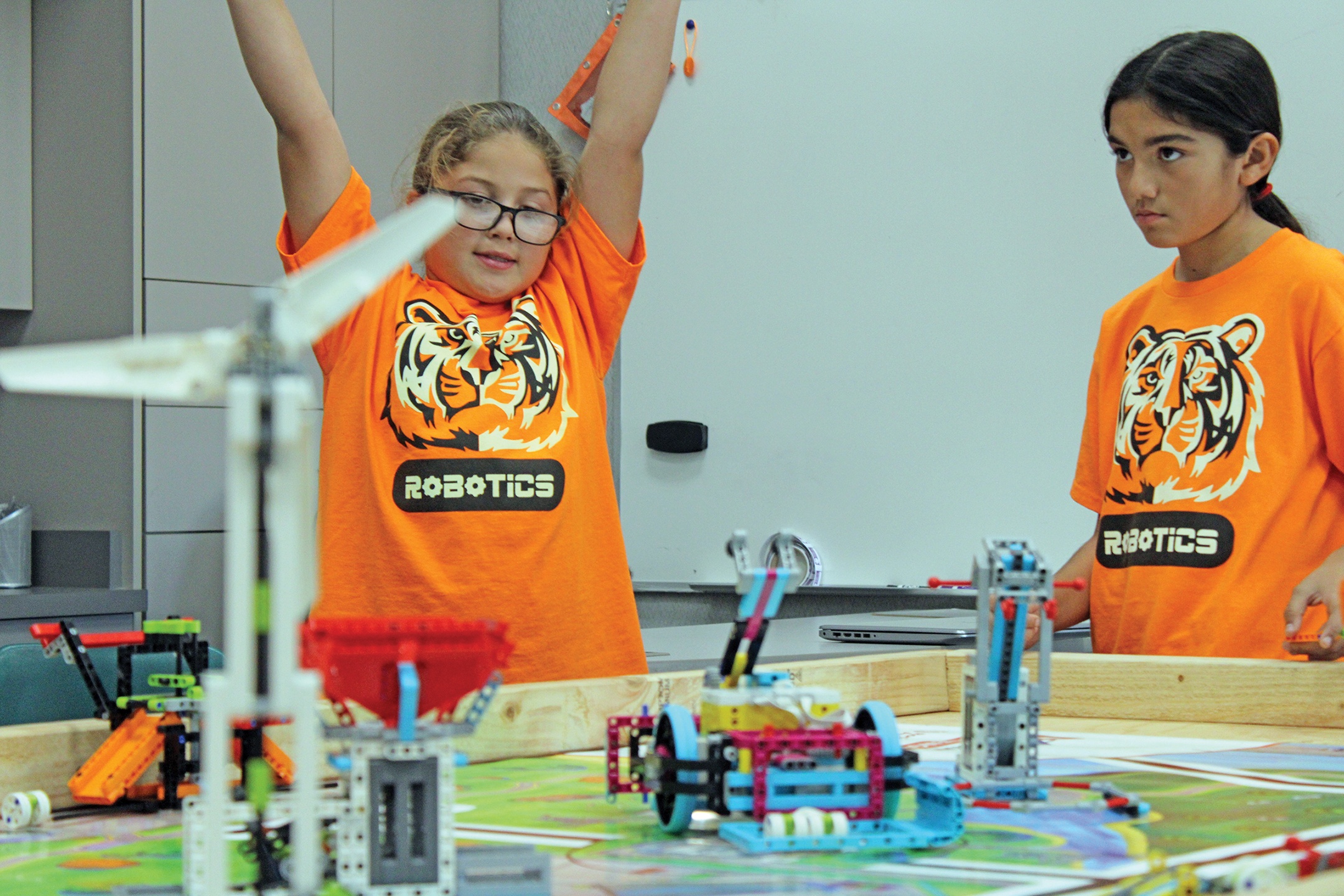 This was the first year that Castle Rock entered the Central Unified Qualifier after their previous robotics program fizzled away years ago, according to their lead coach and teacher, Alexandro Castellanoz. The team was co-coached by teachers Janice Garcia and Evelina Gutierrez, who are new to the robotics competition.

“It’s very rare for a first-year team to make it,” Castellanoz said. “This is a huge thing for [the students], and I think they’re so proud of themselves.”

The group of Castle Rock students is composed of five girls and one boy who began training for this competition in September. During the competition, these young minds presented their Lego invention and placed it on a mat, where the robot then performed tasks such as pushing objects, driving around objects and much more. The goal was to have the robot run for two minutes and thirty seconds by itself. Then, students had to do a presentation where they told the judges about their robotics program, the coding process and everything else they did over the last three months.

“Even though this was our first time, we still won something really important,” Utumapu said. “If we win state too, and we keep on going, it can make really big things for us in the future, especially when it comes to coding.”

There are three rounds in the competition, and during the second round, the team’s robot malfunctioned. The part of the robot called the “rhino horn,” which is responsible for pushing objects around the mat, had begun to malfunction. However, they quickly responded and fixed the malfunction through teamwork.

“Everybody was sad, and we [thought] we should just give up, but we couldn’t,” Rojas said.

The robot was composed of Lego parts and a “brain,” which is the main system of the robot that the students had coded. Castellanoz said the coding of the robot was similar to that of an airplane when it turns. The students programmed the wheels of the robot to move for specific amounts of time, and in certain directions, that way the robot could drive itself around the track without bumping into anything. When asked if this was what they wanted to do in the future, the students had said across the board they all wanted careers in coding and robotics.

At the Central Unified Qualifier, Castellanoz said Castle Rock competed against large elementary schools, such as those in Fresno and Clovis. Still, the small-town kids of Woodlake triumphed in the competition, according to Castellanoz. Additionally, the robotics team is only a year old, and was jump started after Castellanoz began teaching in Woodlake in 2021. For being a first-year competing team, Castellanoz said the students did an outstanding job, even winning a high placing award.

“Besides the overall championship, the Core Values Award is the second biggest prize you can win there, and they won that by just showing their teamwork, their discovery, their innovations, their impact and different core value things that they focused on for this first competition,” according to Castellanoz. 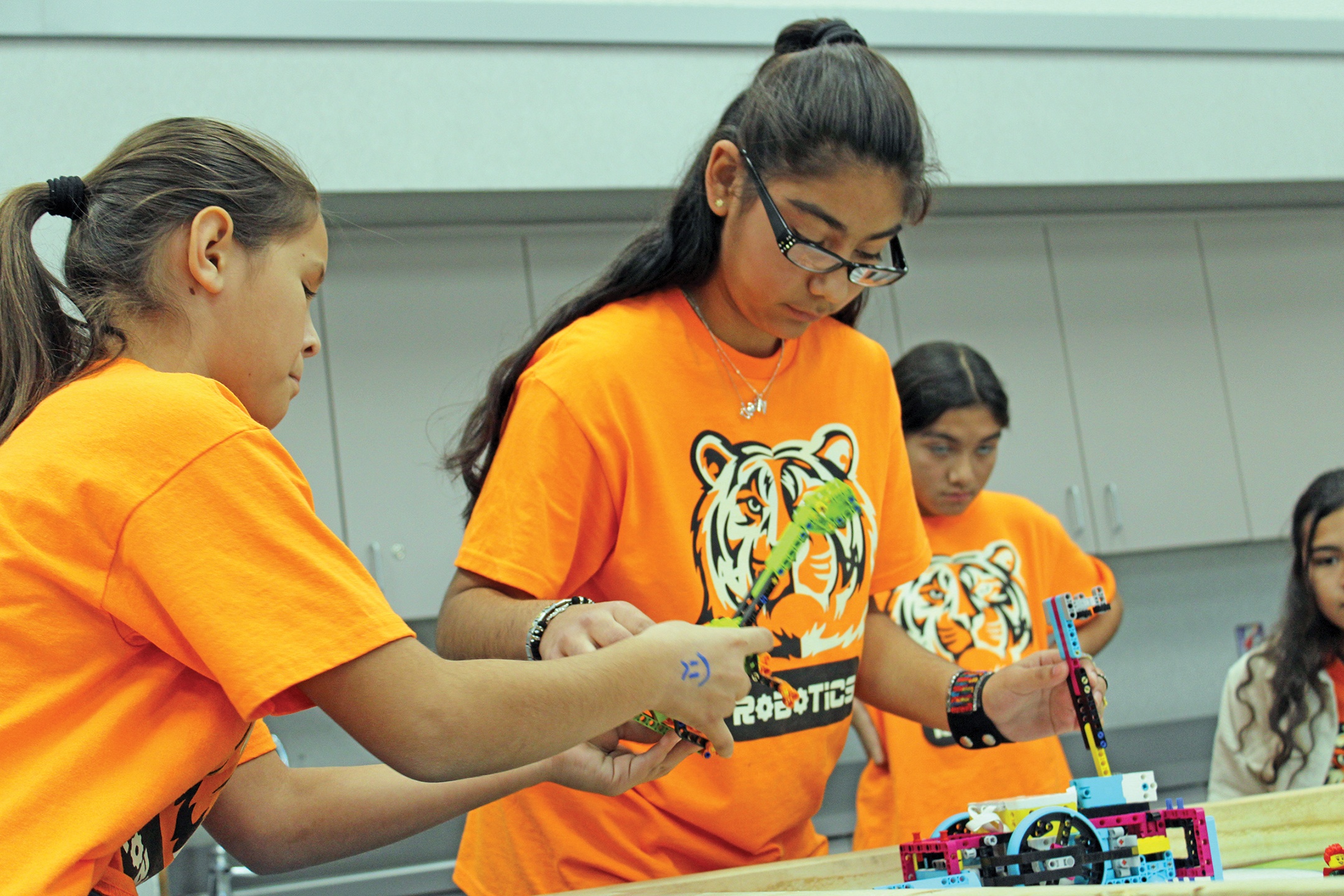 Klara Poloka makes a few adjustments to the team's robot that they plan on putting forward in a championship round. Photo by Lacey Patrick

Castellanoz said that the ultimate goal of Castle Rock’s program would be to make it to the FIRST Lego League World Festival, where students from around the globe come to compete. It will take place in Houston, Texas in April of 2023. In order to get there, they would have to win the state and regional championships, according to Castellanoz.

It would be the first time Woodlake would see the World Festival, but not Castellanoz. At the previous school he taught for, Delano’s Wonderful College Prep Academy, Castellanoz’s team of students made it to the world-wide competition, and competed against teams from Columbia, Australia and a team from Chinese Taipei.

“We’re definitely trying to build a bigger robotics program here in Woodlake,” Castellanoz said. “This is our first push with the competition, and we’re trying to show our administrators, our board members, everybody, that we’re diving into this headfirst, and we’re actually doing pretty well.”

The Woodlake Middle School also competed in the competition, and though they did not qualify for state championships, still did well, according to Castellanoz. The middle school’s robotics team frequently works alongside the elementary robotics team. Castellanoz said that there was friendly competition between the two teams.

“The elementary team was super impressed by themselves because they beat their middle school teammates,” Castellanoz said. “They hadn’t done that all year at practice, so they felt great about it.”