Visalia schools, county health and law enforcement agencies hold town hall meeting to discuss the dangers of fentanyl and what they are doing to prevent student overdose

VISALIA – The number one threat to a Visalia student’s life isn’t COVID or violence, it’s a pill.

There have not been any known overdoses of fentanyl at Visalia Unified campuses, but local officials have watched as the number of exposures to the deadly drug have risen across the nation. Fentanyl causes a fatality every 8 minutes and is linked to nearly two-thirds of all drug fatalities. Fentanyl was the leading cause of death for people ages 18-45 in 2021, outpacing COVID-19, according to data compiled by the Centers for Disease Control.

Fentanyl overdoses in Tulare County peaked in 2021 when 49 people died, a remarkably high number considering there were no recorded fentanyl deaths before 2019. Over half of those deaths were ages 20-40 but the number of people under 20 who died has been climbing since 2020. In Visalia, 17 people per 100,000, higher than both the county and state, died from overdose in the city of Visalia in 2021, according to the California Overdose Surveillance Dashboard. Two of those were age 19 and younger.

Chandler Bailey, a unit manager with Tulare County Health and Human Services Agency (HHSA), said Visalia has the largest population in the county but the highest concentrations of fentanyl tend to be in the communities of Porterville, Lindsay and Woodlake.

Students, parents and community members will likely know when someone has taken fentanyl as the symptoms are similar to prescription painkillers and other illegal opioids, such as heroin. According to the CDC, their body will begin to go limp, they will appear too exhausted to stay awake, they will have cold or clammy skin and their pupils will get smaller. Their breathing will become weak and they could begin choking and gurgling until they begin to turn blue because they aren’t taking in enough oxygen. Repeated use leaves their skin and nails discolored. 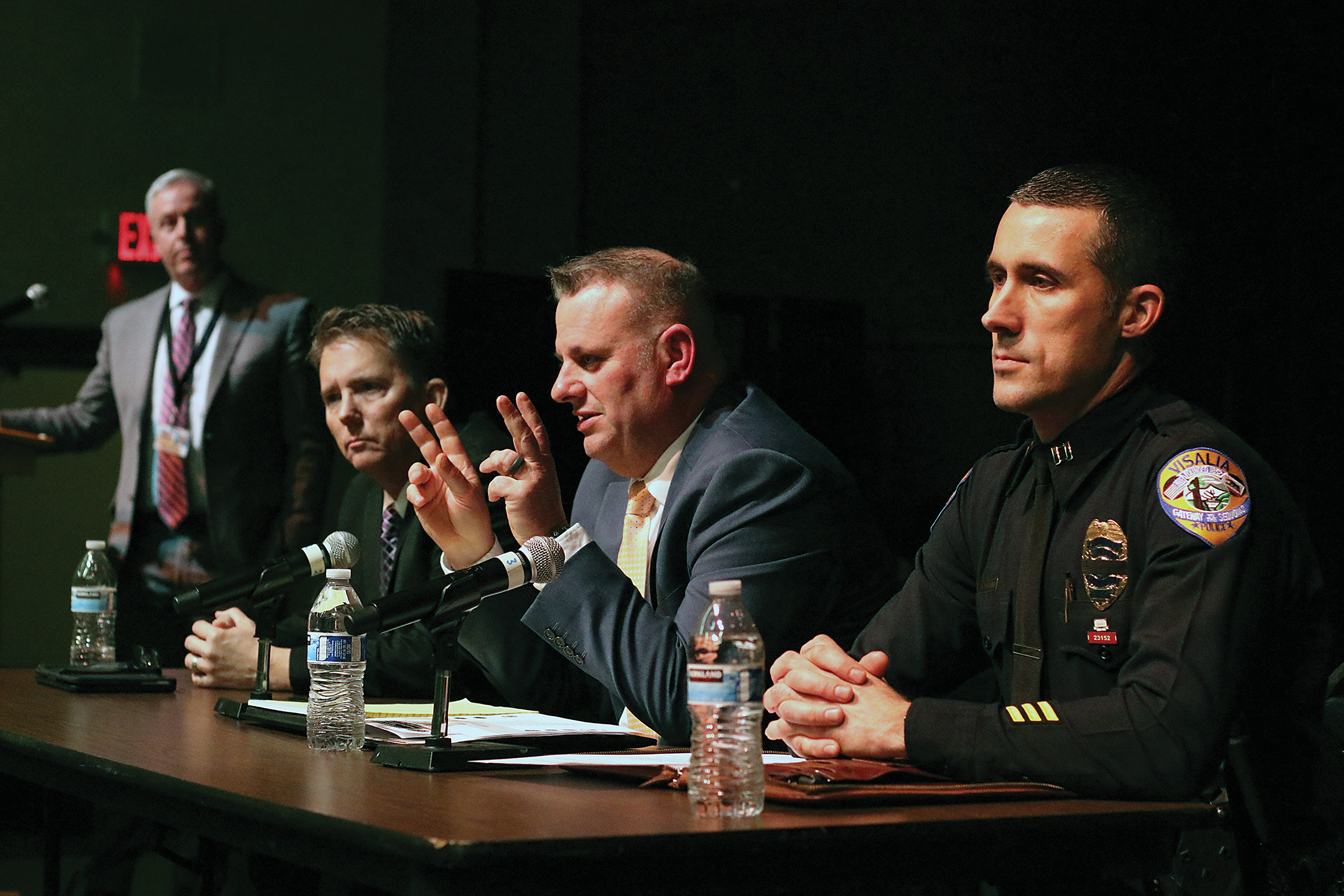 If you think someone might be experiencing an overdose, call 911 immediately. If you don’t have access to Narcan, an overdose reversal medication, keep the person awake and breathing until help arrives and lay the person on their side to prevent choking.

Narcan, the brand name for the medication naloxone, is the best way to counteract the lethal effect of opioids like fentanyl. A life-saving dose of Narcan can quickly reverse an overdose by blocking the effects of opioids. According to the CDC, it can restore normal breathing within 2 to 3 minutes. The drug can be bought over-the-counter at a pharmacy as a nasal spray.

HHSA runs DrugFreeTC.com in conjunction with the Tulare County District Attorney’s Office. The site’s motto, “One Pill Can Kill ,” underscores the danger of children accepting medication from anyone other than their parents, school nurse or doctor. The website also points out fentanyl pills can look identical to prescription medication, increasing the likelihood of accidental exposure to the drug.

Bailey oversees compliance for Tulare County’s contracted Substance Use Disorder clinics. Tulare County Alcohol and Other Drug (AOD) treatment programs are dedicated to serving the residents and families experiencing the effects of substance use disorders. Services include outpatient and residential treatment for men and women provided by certified drug treatment specialists.

During a panel discussion, DA Tim Ward, Tulare County Sheriff’s Lt. Chad Rhyman and Visalia Police Capt. Andrew Swarthout discussed the dangers of the illegally produced opioid. Fentanyl is 50 times stronger than heroin, 100 times stronger than morphine, and is much more dangerous than both. Swarthout said the danger is not only in the drug’s potency but also its inconsistency. Fentanyl pills can contain anywhere from half a milligram of the opioid, enough for an intense high, up to 2 milligrams, a potentially deadly dose of the drug.

It’s also cheaper to manufacture than other drugs and can be sold for more because of its potency. Rhyman said fentanyl pills only cost about 15 cents to make but can be sold on the street for $7, making them extremely lucrative for criminal organizations, such as the Sinaloa and Jalisco cartels in Mexico. That’s why more fentanyl is flooding the streets than heroin.

“It’s so deadly, San Francisco and Seattle dealers are giving Narcan to their customers … to make sure they come back,” Rhyman said. 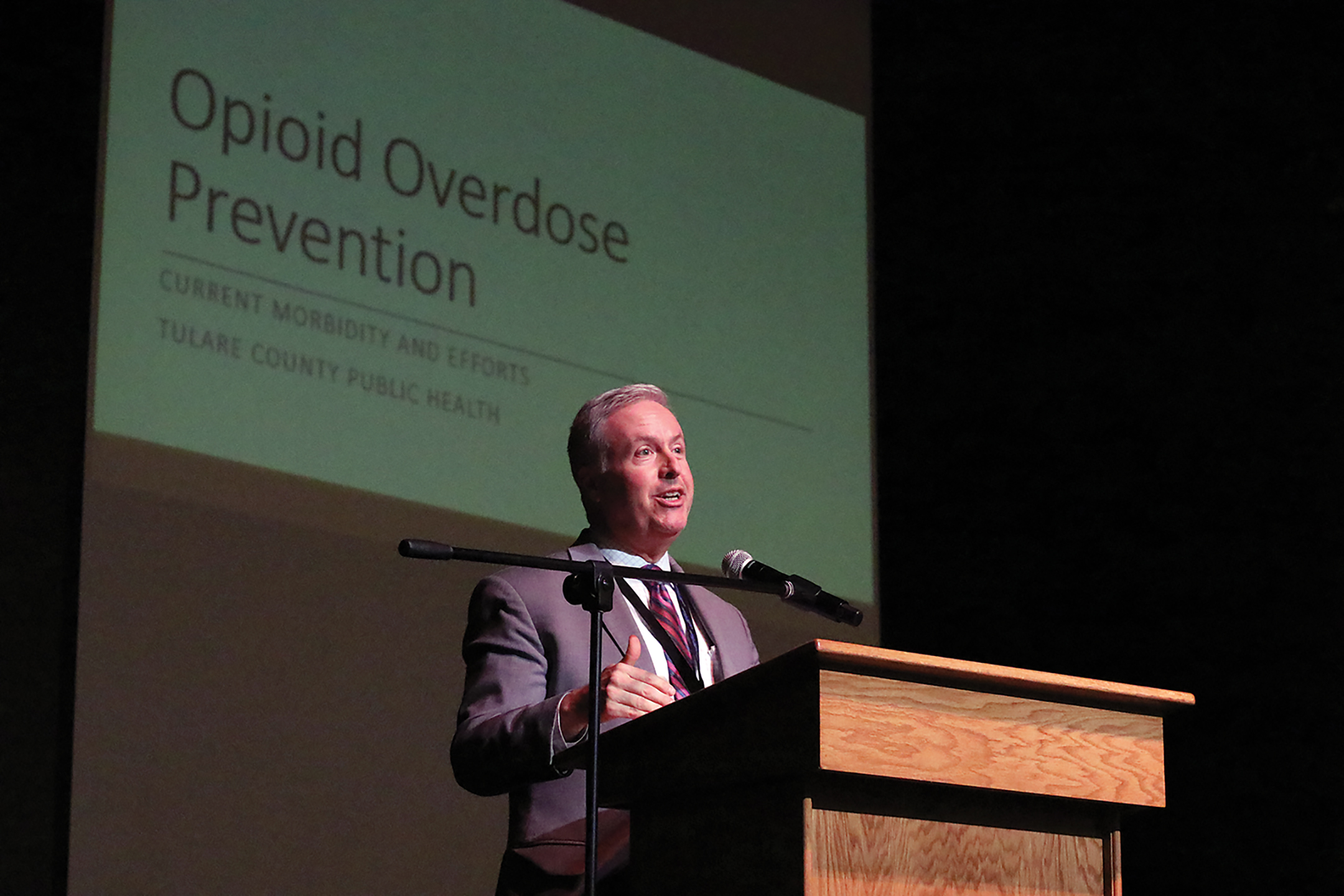 Kirk Shrum describes the dangers of fentanyl, but reinforces the fact that no overdose deaths have occurred on VUSD campuses. Photo by Reggie Ellis

Fentanyl has become the most widely distributed narcotic in Tulare County and the nation. The Drug Enforcement Agency seized 379 million fentanyl pills last year, enough to kill every American.

Rhyman said California has long been a testing ground for new drugs because of its large population and because it borders Mexico, where most of fentanyl is manufactured and then smuggled across the border, according to the U.S. Drug Enforcement Administration.

“A single producer can manufacture 15,000 pills per day,” Rhyman said. “And all of that is easily smuggled in the United States across the border.”

In January 2022, the Sheriff’s Department became one of 600 counties across the nation to be designated a High Intensity Drug Trafficking Area (HIDTA). The program is coordinated under the Office of National Drug Control Policy to disrupt drug trafficking and dismantle criminal organizations. Due to its coordination between local, state and federal law enforcement agencies, HIDTA has seen a sharp decline of methamphetamine laboratories operating in the United States. This has allowed the group to turn more of its attention to fentanyl. In 2021 alone, HIDTA dismantled four major fentanyl manufacturing facilities, confiscated 4.1 million fentanyl pills and removed 4 tons of fentanyl powder out of communities.

“We have passionate investigators and we like what we do,” Rhyman said. “If we find out you are dealing drugs, we are coming after you.”

The drug is primarily being dealt by adults but school-age youth are often the target. Swarthout said the most common type of fentanyl is a pill, known as an M30. The small pills are made to look like prescription pain medicine and often come in different colors, known as “Rainbow” fentanyl.

“At this point, if someone is dealing meth, or cocaine, they are also dealing fentanyl,” Swarthout said.

Ward cautioned parents against thinking about drug dealers as a trenchcoat wearing, back alley standing movie cliche. He said most drug deals are done over private messaging apps, like Snapchat, using nicknames for the drug. The pills are then delivered to a location confirmed by a reply text after funds are transferred through apps like Venmo or PayPal by someone with no criminal record.

“The image of a drug dealer is no longer gangs or a cartel,” Ward said. “It could be your neighbor down the street, sitting with his phone on the couch, watching TV.”

In order to prevent overdoses, Visalia Unified Superintendent Kirk Shrum said nurses at each middle and high school have access to four doses of Narcan while each elementary school has two doses.

“Our staff at each site have been trained to recognize and bring awareness to the dangers of this drug and to administer Narcan,” Shrum said.

Visalia Unified also has a contract with VPD to assign each middle and high school with a youth services officer. These officers specifically deal with schools, juvenile crime and youth outreach. YSOs spend all of their time on their assigned schools. They walk on campus, get to know the principals and staff as well as the students. They often speak at rallies, counsel parents on options when children are in trouble and monitor at-risk youth in an effort to prevent a student from being more heavily involved in negative behaviors, such as drug use.

Swarthout said every VPD officer now carries two doses of Narcan on them because the incidence of fentanyl exposures have dramatically increased in the city. If the first dose doesn’t work, they administer a second because Narcan does not have any known adverse side effects on the body.

“It’s rare for a day to go by without having an overdose call,” Swarthout said. “Narcan really is a miracle medicine.”

Rhyman said California needs stricter sentencing for those who manufacture and deal fentanyl. Under the state’s criminal justice realignment, Proposition 47 reduced sentencing for all non-violent felonies, including drug related crimes and Proposition 57 gave those incarcerated more opportunities for early release. The state laws have been effective at reducing prison populations for those suffering from drug addiction but have also created a revolving door for drug makers and dealers.

DA Ward said the punishment for possessing fentanyl is the same as heroin but the drug is 50 times more dangerous. Possession of fentanyl will only take a dealer off the street for half of a five-year jail sentence.

“The laws of this state are completely inept to address the tragedy on our streets and in our communities,” Ward said.

As president of the California District Attorneys Association, Ward said he and his peers are backing legislation authored by California state Senator Tom Umberg (R-Santa Ana). Senate Bill 44, known as Alexander’s Law, would require anyone convicted of a fentanyl-related drug crime to receive a written warning, or admonishment, they could be charged with manslaughter or murder in the future if they provide the drug to a person who dies. A similar rule has been used in DUI cases since 2004.

“There is implied malice if you know the danger or risk of your actions [for another person] and do it anyway,” Ward said.