On Aug. 26, the Tulare County Board of Supervisors held a special hearing to approve a plan to spend $90,552,914 in federal funds.

Approximately $45 Million of this money was received in June and the remainder will be distributed after the County uses this first allocation. The funds were created by a federal program called, American Rescue Plan Act (ARPA), and is designed to support Tulare County’s response to the economic and public health impacts of COVID-19. Broadly, these funds can be used for four general purposes:

Tulare County’s proposal included plans for “transformational” one-time investments to support the needs to meet several outstanding priorities in Tulare County. According to the staff report, the County is also aiming to support low income and vulnerable communities with these funds. They said the projects and programs detailed in the plan were selected to help all Tulare County communities, but with special consideration for the disadvantaged and underserved communities who experienced a greater negative economic and social impact as a result of the COVID-19 public health emergency. 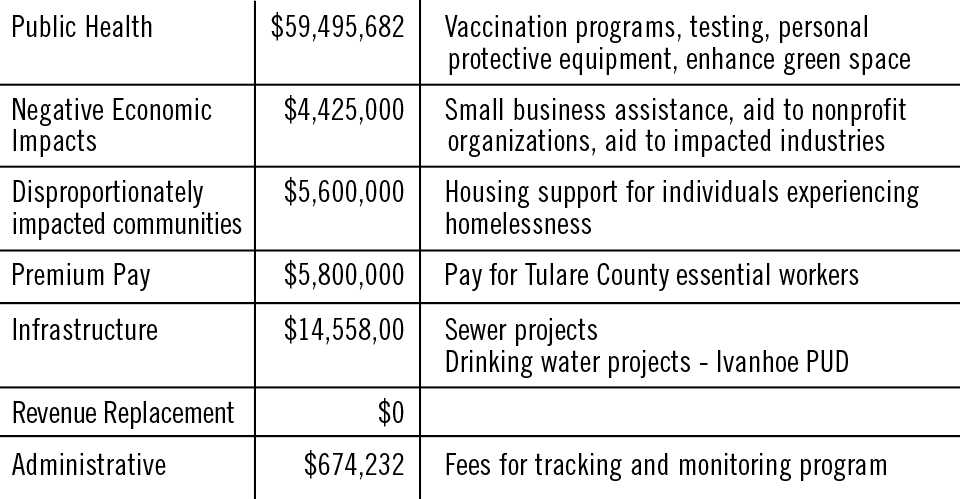 The Plan focuses on projects and programs that may facilitate economic prosperity in disadvantaged communities and hasten a full recovery from the pandemic.

Tulare County’s spending plan proposes the majority of total funds being used for public health maintenance while focusing the remainder on community infrastructure and pay for essential workers.

APRA money will also fund repairs and maintenance for local parks in Alpaugh, Cutler, Goshen, Visalia, Pixley, and Woodville. A request was made by a member of the public to allow these funds to also purchase property for the construction of new parks. This adjustment would have been able to help the purchase of lands in Ivanhoe but was not adopted by the supervisors.

Like many other communities in Tulare County, Ivanhoe is in need of maintenance of its sewerage system. The Ivanhoe Public Utility District will receive $600,000 for improvements to its draining pond.

According to the project description, the proposed project consists of the “completion of bidding, award, construction and placing on-line a new treated effluent storage facility complete with interconnecting piping and pumps to pump treated effluent into storage and to discharge treated effluent to the pasture areas.” This Project is estimated to take 18 months to complete.

This project provides much needed wastewater effluent capacity to the community of Ivanhoe. The district is currently under restrictions to discharge the effluent from its wastewater treatment plant. The project would provide groundwater quality protection as it will allow the district to meet the Waste Discharge Requirements by reducing the nitrate load.

Since these are public funds and transparency is a requirement of receiving these funds, a period of public comment was held to hear input on the proposed plan. Issues ranged from increasing compensation for county workers to building more parks in rural communities.

Jennifer Scott, a Visalia resident, requested that the County invest more in essential workers. She commented, “many of our constituents have not gotten to experience first hand how our county’s stagnant wages, short staffing and rampant turnovers are continuing to affect our communities’ access to critical services and care. Essential workers always make sacrifices to support the county’s economic contingencies but the same workers who bear the brunt always with the short end of the stick.”

Elena Saldavar, a Pixley resident, called in via Tulare County’s remote participation protocols. She remarked that additional funds were needed to support housing in rural farmworker communities: “We are told there isn’t enough water to build homes yet there are these businesses coming in. I know that growth is good but having multiple generations in one household can be a strain on families also.”

Blanca Escobedo, an advocate with the nonprofit Leadership Counsel for Justice and Accountability offered several recommendations. Escobedo has worked with the Ivanhoe Community for nearly two years on advancing local priorities. Escobedo says the residents she partners with have expressed interest in “community resilience centers.”

Resilience centers are intended to be community centers where residents can obtain multiple types of assistance during social and environmental stressors.

As an example of the potential in Ivanhoe she says, “In Ivanhoe the memorial building for example, was a great asset last year and continues to be and has served as a testing center and vaccine administration center multiple times. With further investment this building can serve as a climate resiliency center , cooling center during extreme heat days, and a refuge during horrible air quality days as we’ve seen the past couple of weeks. With the climate crisis continuing we are going to keep experiencing the impacts we are seeing this summer in the new normal in unincorporated communities. Continued investment can support them with food storage, internet centers, and places to receive job training and other services.”

After half an hour of public comment, the Supervisors closed the hearing. The suggestions of the public were not integrated and a motion was set forth by Supervisor Micari and seconded by Supervisor Townsend. The vote unanimously passed 5 to 0.