VISALIA – Despite being a member of the Lost Generation of artists in the Roaring ’20s, composer Aaron Copland found hope for the future in the country’s newfound nationalism at the tail end of the Great Depression. His score for the ballet “Billy the Kid” helped establish the American identity in music and song. It is most famous for its incorporation of six cowboy tunes and American folk songs as well as its use of American forms of dance. The ballet uses the infamous outlaw as a symbol of the Wild West and its pioneering promise of adventure and fortune.

“I cannot remember another work of mine that was so unanimously received,” Copland noted at the ballet’s premier in New York in 1939. 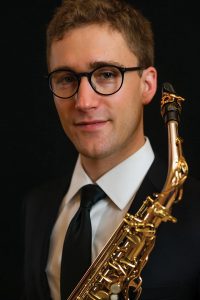 The ballet will be performed by the Sequoia Symphony Orchestra on Jan. 25 as part of its “American Inaugurals” concert at the Visalia Fox Theatre. Those not familiar with ballet will likely know Copland for his musical scores on the films Of Mice and Men (1939), Our Town (1940), The North Star (1943), which all received Academy Award nominations, and The Heiress, which won Best Music in 1950.

Also on the program is “Rush,” a concerto for alto sax and orchestra. Kenneth Fuchs composed what is considered the quintessential concerto for the underappreciated alto sax in 2012 because he wanted to capture the musical language of the Jazz scene in New York when he was growing up. The piece won a Grammy Award last year.

Playing the solo part is Jonathan Hulting-Cohen. The saxophonist met music director Bruce Kiesling when Jonathan was working as an intern at YOLA (Youth Orchestra of Los Angeles), which Kiesling used to conduct. Hulting-Cohen first performed with the Sequoia Symphony in 2016.

Tickets are $25-$50 at the symphony office, 208 W. Main Street, Suite D, Visalia, downstairs in Montgomery Square. Student prices are $10. Tickets are also available at 732-8600 or go to www.sequoiasymphonyorchestra.com.