EXETER – This historical home is located at 226 South B Street in Exeter. There is parking in front and across the street. From the front of the house there is an impressive view of the Sierra Nevada Mountain range. 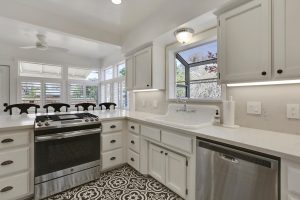 The Longcrier home on South B Street is part of the Exeter Woman’s Club’s spring home tour on March 21. Photo by Denise Albright.

Before we get into the tour of the home, I would like to tell you some of its amazing history. This home was originally built in 1918 on a much larger section of farmland and was purchased by a family by the name of Roark. Sometime in the 1930s, Lauren’s great- great-grandmother, Estie Carruth, purchased the residence becoming the first generation of Lauren’s family to own the home. Many years later Lauren’s great-grandmother, Velma Kilpatrick, purchased the home becoming the second generation to own the home. Lauren said her great-grandmother, during this time, had worked at Exeter Memorial Hospital and had taken rose cuttings from patient’s flower bouquets, grew them and had planted them where they are still today in the north side garden of the home. Then, in 2005, Lauren’s grandmother, Wilma Hirni, took ownership of the house making it a third generation ownership. Over the years several parcels of the larger property were sold and other houses were built becoming the neighborhood as it is known today. In 2018, 100 years from the date the house was first built, Lauren and her family purchased the residence from her grandmother. Lauren said she and her husband made their offer anonymously and then surprised her grandmother with the fact that they were now the new owners which made her grandmother extremely happy to still be keeping her beloved home in the family.

The tour starts at the front door of this cute three bedroom, two bathroom farmhouse style home. Lauren said most of the home is still original but over the years there have been a few changes made inside. The entryway at one time was a continuation of the north side screened porch which was closed off to form a new entry into the living room. Around the corner of the entry there is a open closet that used to be the front door. Inside this closet is a framed doily that was crocheted by Lauren’s great- great-grandmother. Lauren said sometime in the 1970s the ceiling had been lowered to the height of the entryway ceiling and remade with acoustic tiles and the living room carpeted. She explained when they purchased the residence in 2018 she and her husband had raised the ceiling back to its original position and removed the carpeting, again exposing the beautiful hardwood floors. From the living room there is a door that leads to the screened porch. Lauren said during the hot summers her grandmother used to sleep here because it was much cooler than the rest of the house. 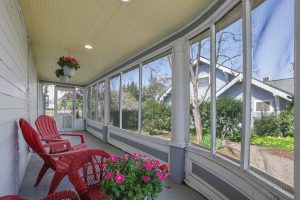 The Longcrier home on South B Street is part of the Exeter Woman’s Club’s spring home tour on March 21. Photo by Denise Albright.

The tour now enters the front southeast bedroom of the home. This bedroom and the second bedroom are joined by a bathroom in a Jack and Jill style. The bathroom has been renovated in colors and tile patterns reminiscent of the home’s age and features a 100 year old claw foot bathtub and dual sinks. The colors are done in crisp whites with black and white tiled floors. From the bathroom you will enter the second bedroom where you will see an old fashion four poster farmhouse style bed with a brightly colored bedspread.

Next you will enter the third bedroom. Notice the two pictures on the dresser. One is of Lauren’s great-great-grandmother, Estie Carruth, and her husband, Robert , and the other is her grandmother, Wilma, as a girl. The next room is the second bathroom which is done in the same décor as the first and then into the laundry room. From the laundry room you will enter the kitchen. The kitchen has been renovated to perfection in the same colors and patterns as the bathrooms and laundry areas. Lauren said a wall was removed from the original floor plan to make the kitchen larger. New countertops were added but the sink, windows and pantry remained in the same original locations. A new sink was added but it is an exact replica of the original sink. A new garden style window replaced the old one. On the wall next to the sink there is a picture of Lauren’s great- grandmother standing at the old sink in front of the old window.