In “The Devil’s Harvest,” author Jessica Garrison attempts to answer questions as to how “El Mano Negra” evaded capture for 30 years while living in Earlimart 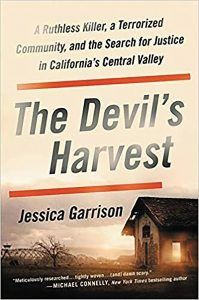 TULARE COUNTY – Hitman is a term typically reserved for action films, violent video games and professional wrestling monikers, stories loosely based on conspiracy theories and modern myths. But one former Tulare County resident not only described himself as a hitman, he confessed to being hired by drug cartels to kill more than 50 people across the country.

On the surface, 58-year-old Jose Martinez didn’t seem evil or even that remarkable – just a regular neighbor, good with cars and devoted to his family. But in between taking his children to Disneyland and visiting his mom, Martinez was also one of the most skilled professional killers police had ever seen. What was remarkable was his ability to get away with murder for more than 30 years, the topic of a new book “The Devil’s Harvest: A Ruthless Killer, a Terrorized Community, and the Search for Justice in California’s Central Valley.”

Released on Aug. 4, 2020 by Hachette Books, the true crime biography describing a brutal and remorseless killer yet a loving and devoted father and grandfather. Author Jessica Garrison, an award-winning journalist formerly of the LA Times and currently a senior investigative editor with BuzzFeed News, took much of the information from a 400-page memoir penned by the Black Hand himself while serving out his 10 consecutive life sentences and meticulously corroborated with decades of case files, interrogation transcripts and on-the-ground reporting.

The book paints a broader picture of Marintez’ childhood, split between the new center of the drug world in Mexico’s Sierra Madre region to his family’s own drug smuggling operation in the fields of Earlimart in the shadow of the Sierra Nevadas. Earlimart, by the book’s accounting, had earned the nickname of “Murdermart” for its violence between gangs, drugs and those taking advantage of its population of undocumented immigrants who cannot speak up for fear of deportation.

Martinez said he first killed when he was 16 years old. He described killing the three men he believed raped and murdered his older half sister. 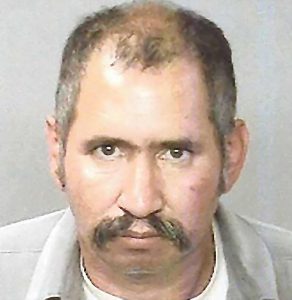 He tracked one victim to one of the wealthiest corners of America, a horse ranch in Santa Barbara, and shot him dead in the morning sunlight, setting off a decades-long manhunt. He shot another man, a farmworker, right in front of his young wife as they drove to work in the fields. The widow would wait decades for justice. Those were murders for hire. Others he killed for vengeance.

He killed one man in April 1995 simply for parking in his driveway after he had politely asked him not to three times. The fourth time ended with Martinez asking the man for a ride to a store and leading away from any towns on the backroads of southern Tulare County where he shot him in the head. Garrison retells the story of how Martinez’s son had been hit by a car backing out of this driveway a few years earlier and he put up signs letting people know not to park there.

“So,” Martinez asked during the drive, “how come you don’t listen to people when they ask you not to do things, like park in their driveway?”

“I only listen to my parents,” the man replied.

It was a disrespectful answer. Martinez said he pulled over to the side of the road, took out his .44-caliber, and shot Domingo once in the head. Then, he later wrote, he spoke to the dead body slumped in the passenger seat: “I’m not your parents, but I’m El Mano Negra. When I talk, people listen to me.”

Martinez pled guilty to nine murders in California in October 2015. Six of those murders were in Tulare County. Oct. 21, 1980, near dawn, 23-year-old David Bedolla of Lindsay was driving to work when he was shot in the head by the passenger of a vehicle that overtook him. According to Martinez, he waited outside of his victim’s home from about 4 a.m. until Bedolla left for work. As Bedolla was driving westbound on Hwy. 65 toward Tulare with his wife, brother, and brother-in-law. As he drove pass Bedolla’s vehicle he noticed that the side window was rolled up. Martinez then shot at Bedolla two to three times with a .22 rifle hitting him at least once in the head.

After being shot Bedolla’s vehicle swerved off of the road and into a vineyard. An autopsy indicated that Bedolla died as a result of a small caliber gunshot wound to the head. During his confession Martinez told investigators that he had been hired to murder Bedolla, but was unaware as to why and did not ask.

Martinez’s next murder took place on Oct. 1, 1982. The victim was 30-year-old Sylvester Ayon of Santa Ynez, who was shot multiple times while driving a tractor on a ranch off of Refugio Road in Santa Barbara. Martinez also attempted to kill a 17-year-old juvenile who was a co-worker of Ayons.

According to Martinez he was hired to kill Sylvester Ayon who was believed to be involved in a dance hall shooting that occurred in Durango, Mexico, in 1979 where seven people were shot, four of whom died. Martinez shared with investigators that at least one of the people killed in Mexico was a relative. The attempted murder victim known as “G.G.” was riding in a trailer being pulled by the tractor carrying Ayons. Martinez shot G.G. in the stomach because he had been a witness to Ayons’ murder.

The 22-year-old Earlimart resident walked out of his house on Oct. 19. Two days later his body was discovered having been shot and stabbed. During his confession Martinez revealed that he shot Raul with a handgun and after his gun jammed, he picked up pruning shears which he used to stab Gonzalez to death. Martinez told investigators that he killed Gonzalez because he owed him $2,000.

Five years later, on Feb. 14, 2000, 56-year-old Santiago Perez of Pixley was found shot to death in his bed by his four minor children. Investigators discovered that Martinez was friends with Perez’s wife who was the sister of Sylvestre Ayon, the victim of Martinez’s 1982 murder. Martinez obtained keys from Perez’s wife who was out of town and unaware that he had taken her keys.

On Feb. 13 Martinez went into Perez’s bedroom with the intent of murdering him but found that his youngest daughter was sleeping next to her father. Martinez left that day but returned the following day at 3 a.m. at which time he found Perez alone in bed and shot him in the head with a .380 handgun. Martinez left the home through the front door. Investigators corroborated Martinez’s statement, confirming that Perez’s wife was indeed out of town during the time of the murder visiting her mother in the hospital. Perez’s youngest daughter also told police that on Feb. 12 and 13 she slept in her father’s bedroom, but that on Feb. 14 she slept in one of her brother’s rooms. As well, there were no signs of forced entry and Perez’s children heard the front door slam shortly after hearing shots fired. Furthermore, investigators discovered that Martinez and Perez’s wife began living together within two months of the murder.

As Martinez continued to kill he felt emboldened, not just because he had gotten away with murder before, but because of who he was killing and where. Melding the pacing and suspense of a true crime thriller with the rigor of top-notch investigative journalism, The Devil’s Harvest follows award-winning reporter Garrison’s relentless search for the truth as she traces the life of this assassin, the cops who were always a few steps behind him, and the families of his many victims.

When asked how he got away with it for so long, Martinez simply replied that it was because he was “so, damned good” at it because he never left evidence and rarely left witnesses. Garrison writes that his greatest asset as a killer is his grasp of the “dark truth of the American justice system: If you kill the “right people” – people who are poor, who are not white, who may be presumed to be criminals themselves, and who don’t have anyone to speak for them – you can get away with it.”

“’El Mano Negra’, the Black Hand as Martinez was known, had found an ideal place to ply his trade,” Garrison writes in the book’s introduction. In interviews with the family’s of Martinez’s victims, Garrison noted none of them had made public pleas for justice, mostly because they didn’t think anyone with any influence – police, politicians or reporters – cared enough to follow through.

Garrison makes the case Martinez’s murders were often overshadowed by anti-immigrant sentiments, a shortage of Spanish speaking detectives, and one of the largest expansions of the prison system in the world. The Devil’s Harvest uses a gripping and often shocking narrative to dig into one of the most important moral questions haunting our politically divided nation today: Why do some deaths–and some lives–matter more than others?