Exeter family continues tradition of antique fire truck and Mr. and Mrs. Claus by bringing Santa down your street and Main Street

EXETER – Rudolph’s red nose may guide Santa’s sleigh through the Tule fog, but it is an antique red firetruck that will help old St. Nick keep an Exeter tradition alive.

The familiar fire truck has been a siren of the season at Exeter’s Christmas Open House event for more than a decade. Owned and operated by Mike Sherer, the truck traditionally picks up holiday shoppers from Mixter Park, located at the corner of Pine and E streets, for a ride around downtown each Thursday evening between Thanksgiving and Christmas. The park is also where visitors can get a photo with Mr. and Mrs. Claus, who happen to be Mike’s brother Alan and wife Debbie. 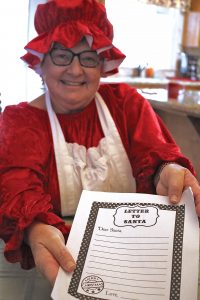 Mr. and Mrs. Claus will continue their tradition of greeting children during Exeter’s Christmas Open House on Thursday nights in December but will do so from the back of an antique fire truck. And while the Christmas couple won’t be sitting downtown, you can still drop off letters to Santa in the magic mailbox at Mixter Park. Photo by Reggie Ellis.

“This was something we all wanted to see continue,” Alan said. “I didn’t like the idea of a Christmas without Santa and the firetruck downtown.”

When the Sherer’s discovered Claus photos had been canceled in the park, the firefighting family decided to answer the call to save the Christmas tradition from coronavirus. Beginning tomorrow night, Dec. 3, the firetruck will be driving Mr. and Mrs. Claus around town, including several passes through downtown, between 6 p.m. and 8 p.m. Mike said the route will be focused on neighborhoods west of railroad tracks on Dec. 3, east of the railroad tracks on Dec. 10 and Santa will decide who has been nice enough to get a second visit on Dec. 17, as long as it isn’t raining or freezing. Nobody wants to see Santa get sick before the big night.

“We won’t be stopping or taking any photos, so we will be safe, but we will be bringing some Christmas cheer wherever we go,” Sherer said.

Mrs. Claus also wanted to make sure children still had a chance to send their Christmas letters to the North Pole. A special mailbox will be located in the corner of Mixter Park near the Exeter Mural Gallery and Wildflower Café. Form letters will be available at various shops in downtown so that children can write their letters while parents shop and then drop them in the mailbox before heading home and dreaming of their gifts.

“I love seeing the faces of people and the joy it brings them to see Mr. and Mrs. Claus,” she said. “Things will be a little different this year but at least we can spread some joy for those who can’t visit family or go shopping.”

Mike first obtained the 1936 Dodge fire engine in 1987, when he and fellow firefighter Carl Corley purchased it and began restoring it. The originally wanted the truck for musters, competitions between volunteer firefighter crews across the nation, where the two men could promote Exeter’s own muster. The event would bring in muster teams from 20-30 departments each year, or about 1,000 people who spent the weekend, shopped and ate at local restaurants as well as raising money for the department’s giving efforts. Mike and Carl were mainstays in the Exeter Fire Department from 1978 until 2008, when they left as local fire departments began moving away from traditional volunteers.

Under former Fire Capt. Wes Grim, Exeter’s volunteer firefighters used the antique truck to deliver toys, and a visit from Santa, to low-income boys and girls throughout the city. The tradition eventually changed to dropping them off at the school district to distribute and eventually lost its Christmas magic. Not ones to sit on the sidelines when something is in need of saving, Mike and Carl leapt into action and offered fire truck rides to shoppers during downtown Exeter’s annual Christmas Open House event in 2009. Mike continued the tradition with his brother Alan after Carl passed just before Christmas in 2013.

In 2016, Alan took his commitment to a new level and became the embodiment of holiday cheer as the jolly old elf himself. For the last few years, he and wife Debbie have donned the red and white suites and are looking forward to continuing that tradition at a time when people need it more than ever.

“We want to wish everyone a Merry Christmas from the Sherer family,” Mike said. “We appreciate all the support the community has given us over the years.”