Favela ‘seen’ as a cultural hero in latest exhibit

VISALIA – A Tulare County native whose art was a voice for the Chicano experience in Central California is the subject of the current exhibit at Arts Visalia.

The exhibit, “Seen and Unseen: Ricardo Favela Expressions of Chicano/a Art” honors the life and legacy of artist Ricardo Favela and brings awareness to the region’s rich cultural diversity. The exhibit began on March 3 but was extended through April due to its popularity.

Favela began and ended his life in Tulare County but was best known for his art and teachings in Sacramento. He was born in 1945, in Kingsburg to migrant farm workers and raised in Dinuba before earning an associate’s degree from the College of the Sequoias in Visalia. He then enrolled at Sacramento State, where he earned a bachelor’s degree in 1971 and a master’s degree in 1989. During his time as an undergraduate in the 1960s, he found his artistic direction doing silk-screen posters to promote political rallies, community art projects and events. Many of them featured skeleton figures or calaveras, a decorative skull found in Mexican folk art, in the place of primary figures. Therefore, his artistic aesthetic is rooted in the plight of the people, “los povertycitos” as he would say, implying the Chicano spirit lied just beneath the surface in everything we see. 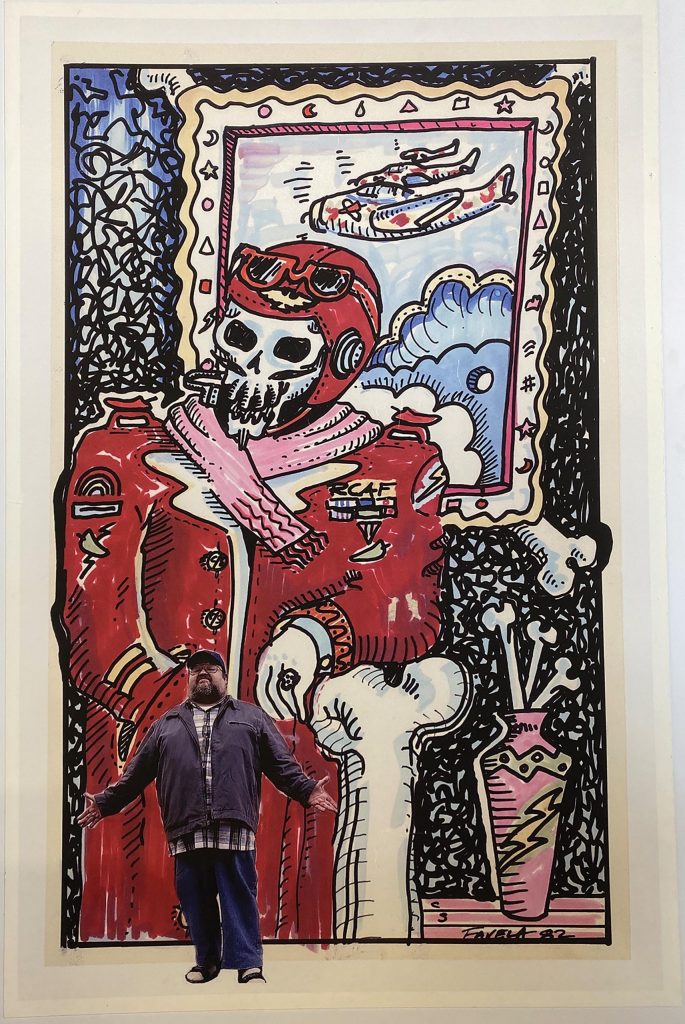 Ricard Favela is a leader of the Chicano art movement.Photo courtesy of Arts Visalia

He was best known for his work with a group called the Rebel Chicano Art Front. Formed in 1969, the abbreviation RCAF was confused with the more widely known Royal Canadian Air Force. The artists changed the group’s name to Royal Chicano Air Force as a play on misunderstanding and leaned into the mix-up by donning flight jackets, aviator glasses and other military garb and traveling in a jeep. The RCAF managed to tackle the most difficult problems of the day, using “wry humor and biting wit” to address “fundamental contradictions of a society which ignored the obvious cultural symbols and underpinnings of the growing Mexican American population,” according to the UC Santa Barbara, home to Favela’s collection of posters, prints and other artworks by the Royal Chicano Art Force collective he donated to the library prior to his death.

“For the most part, my works and those of the other Chicano/Indio artistas are not what the so-called experts call classic, or even technically brilliant. They are, however, works rooted in our concern for our people and culture, thus giving them a vibrant emotional life,” Favela said prior to his passing in Visalia in 2007. “The fact that, as a people, we are tied to the earth by our indigenous heritage and, ironically, by the great U.S. society’s penchant for offering us a farm worker occupation in our own occupied ancestral lands leads me to strive with my teaching and art to influence and ultimately give consequence to our present educational system, whether inside or outside the mainstream.”

Favela and his colleagues worked together on murals in cities around the state. Those artworks included more than a dozen murals they painted on public walls in Sacramento. In 1972, the RCAF created the Centro De Artistas Chicanos that became the springboard for multiple community programs including the La Nueva Raza Bookstore, RCAF Danzantes (cultural dance venue), RCAF Graphics and Design Center, and the Barrio Art Program for underprivileged children.

“His art imparted powerful political and social commentary, including support for the farmworker rights movement that was close to his heart,” states the City of Sacramento’s website.

In 1982 Favela began teaching art professionally at CSU Sacramento. He received his Masters of Arts from CSU Sacramento in 1989 and began working in the art department as a professor. Favela also traveled and gave lectures, organizing and curating various art exhibits and retrospectives. He was the senior artist for CEMA’s Proyecto C.A.R.I.D.A.D (Chicano Art Resources, Information, Development, and Dissemination) and his exhibitions have shown at the Oakland Art Museum, San Francisco Museum of Art, the California State Capitol and the San Francisco Art Institute among many others.

Favela died of a heart attack on July 15, 2007 while visiting family in Visalia, California. His death was a major loss to the Chicano Art Movement. A park in the northeastern corner of McKinley Village in Sacramento was posthumously named in his honor.

In Gallery 2, Arts Visalia is showing the drawings and paintings of Jana Botkin in her exhibition titled “Still Here.” As a life-long resident, Botkin uses her realism style to express her pride in Tulare County. She continually searches out the beauty of our county in the parts that make rural living so appealing. The exhibition will also run through April 30.

Both galleries are located at Arts Visalia Visual Art Center, located at 214 E. Oak Ave. in Visalia. Admission is free and the center is open from noon to 5:30 p.m. Wednesday through Saturday. Due to social distancing limitations, there is limited capacity. To schedule an appointment, call 559-739-0905, or email [email protected].