The list of candidates for Tulare County District 1 Board Supervisor is continuing to grow as yet another name has entered the race. 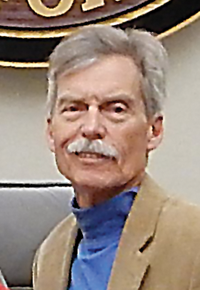 John Elliot officially announced his candidacy on Monday, Jan. 4. The Kaweah Commonwealth publisher recently wrote, “It’s something I’ve been seriously considering since my luncheon meeting with Supervisor Allen Ishida this past summer.”

Elliot first encountered Ishida during the 2004 Supervisor election. Elliot was covering the candidates forums and began to understand what it took to elected. According to Elliot, Ishida said that there are a lot of things about Tulare County government he didn’t know at that point, but what he did know how to do was to look for the information to answer questions or make an informed decision.

“One of the things I’ve learned in my career (two decades as a public historian, 20 years as a newspaper owner/publisher, and 10 years as a planning commissioner) is how to research and find answers. So I feel strongly that Ishida’s 2004 self-assessment is a part of my toolkit as a candidate in 2016”

In addition to being the publisher of the Kaweah Commonwealth, Elliot has served as Tulare County planning commissioner since 2006. Ishida pledged to get Three Rivers residents more involved in the workings of county government. After his election, Ishida appointed Tom Sparks to the Tulare County Association of Governments (TCAG) board; at the end of 2005, he appointed Elliot to be the District 1 commissioner on the Tulare County Planning Commission.

His experience as commissioner has taught him something about nearly every aspect of county government as well as how to make land-use decisions. In fact, there is no better training ground for a supervisor, “Ishida recently told me that the business of being a supervisor is 90 percent land use and 10 percent fiscal/ personnel matters,” said Elliot. He went on to say that all the extra boards that a supervisor must serve on and the numerous meetings to attend on behalf of the county are in one way or another related to budget or regional land-use planning.

Elliot has co-owned the weekly Three Rivers newspaper with his wife, Sarah, since 1995. His experience as publisher has allowed him to communicate, and write and research weekly, while  keeping his intellectual skills sharp, providing him with a vehicle for community service.

Elliot encouraged voters to, “Join me in this odyssey and get involved with the election of your next supervisor. At the very least, we will all learn more about Tulare County government and what’s at stake for all the  residents of District 1 and Kaweah Country.”

Election information and voter registration materials are available from the Tulare County Elections Office in the Government Plaza (5951 S. Mooney Blvd.) in Visalia.