TULARE COUNTY – Everyone knows the song, “Santa Claus is coming to town” and in the most cases, his first appearance of the year isn’t on your rooftop, but as the jolly grand marshal of a parade. Throughout the month of December communities around the foothills will be holding Christmas parades for families to enjoy.

This Friday, Dec. 1, the City of Exeter Parks & Recreation Department will hold its annual Christmas Parade beginning at 6:30 p.m. down Pine Street in downtown Exeter. This year’s theme is “Christmas in Paradise.” The following categories are featured: Youth, Float, Marching Band, Dancing/Baton Group, Animal and Misc.

No Santa impersonators are allowed in the entries. The deadline for entries was Nov. 27. For more information, call 559-592-5262.

The parade through the foothills continues next Saturday, Dec. 9. Woodlake non-profit, Homegrown Project will be hosting the fourth annual Woodlake Christmas Parade.

The parade begins at 7 p.m. sharp on Valencia Boulevard. Parade entry forms may be picked up and turned in at Woodlake Fire District, 216 E. Naranjo Blvd. Entry deadline is 4 p.m. on Dec. 1. Categories include marching band, dogs, color guards, horses, dance troupe, antique auto, other animals, novelty and float with lights. No Santa impersonators are allowed in the entries. For more information, call 559-804-5203 or 559-909-2923.

Prior to the parade there will be a Santa’s Workshop at the Woodlake Plaza from 4 to 7 p.m. Each child will be given a chance to meet Jolly Ole’ St. Nick, as well as receive a gift and photo compliments of The Homegrown Project along with their generous sponsors.

The festivities don’t end in Woodlake, but will continue in Lindsay on Friday, Dec. 15.

Sponsored by the City of Lindsay and Lindsay Chamber of Commerce, the celebration begins at 6 p.m. with a Lighted Vehicle Christmas Parade from the Lindsay Memorial Building south on Elmwood Avenue toward City Hall. Parade entries must line up at 5:30 p.m. at Lindsay City Park. Entry deadline is Wednesday, Dec. 13. There is no entry fee but a prize of $250 will be awarded to the best decorated vehicle. 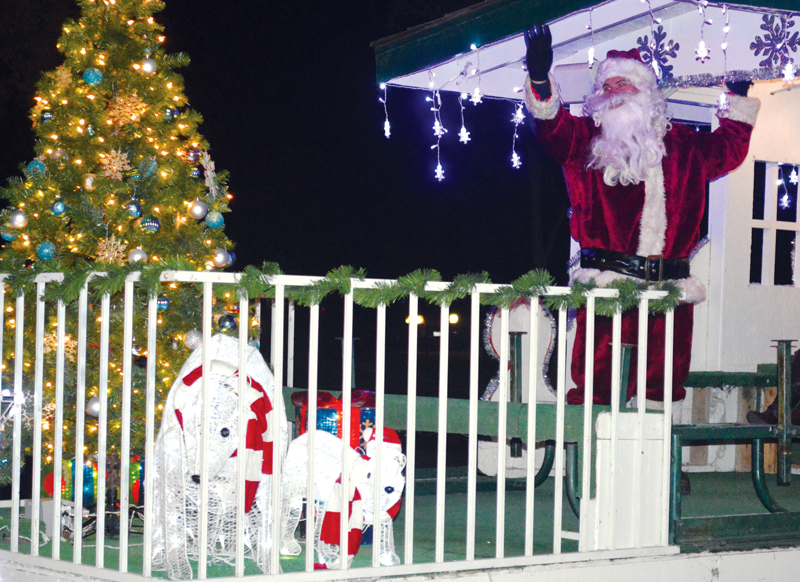 Santa arrived last year on a float in Woodlake’s Parade along with some firefighting elves. File photo.

The parade will be followed by Santa Night, an annual tradition of the Lindsay Police Department. After the parade, Santa will arrive atop a bright, shinny fire truck before visiting with boys and girls from the community. Each child will receive a free toy donated or gathered by the Lindsay Police Officer Association.

Free cookies, sweet bread, hot chocolate and fruit cider for everyone will be served by the Lindsay Sikh Community, at no cost until supplies last! For more information, call the Lindsay Chamber of Commerce at 559-562-4929 or Chamber Director Virginia Loya at 559-333-1994.