Winter League Awards: Marcos Ceballos and Chloe Welch are among those given special recognition in their respective leagues

FOOTHILLS AREA – As winter sports draw to a close around the valley leagues give special recognition to standout players. Among the eight listed are two time winners, Lindsay’s Marcos Ceballos and Exeter’s Chloe Welch.

Marcos Ceballos – Most Valuable Player
The East Sequoia League boys soccer teams are littered with talent. In regards to the foothills area it might be one of the most talented leagues around and for the second straight year Lindsay’s Marcos Ceballos was named the most valuable player.

“I am very happy that I was able to win the award again,” Ceballos said. “It just shows that all my hard work did in fact pay off.”

Ceballos scoring ability during his final season was as strong as ever. In 26 games played he scored 30 goals. That translates to a 1.2 goal per game average. Three times this season Ceballos scored a hat trick, three goals, in a single game. The final one came during a 7-3 win over the Corcoran Panthers on Jan. 26.

No matter the accolades Ceballos mind was still on helping the Cardinals to win games. Most important of them all was keeping the ESL title streak alive, which they did.

Ceballos will be committing to UC Merced in the coming weeks. While competing for the Bobcats he will study business. 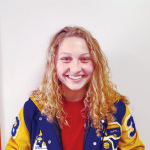 Chloe Welch – Defensive Player of the Year
Every player on a basketball team has a role. For two time Central Sequoia League (CSL) defensive player of the year award winner Chloe Welch that role is defense.

“I am all about defense and doing the dirty work,” Welch said.

A lot of the time Welch was matched up against some of the best players. Not only from around the CSL, but the valley as well. In 19 games played this season she had 23 steals and 64 rebounds. Both numbers led her team. In the opening game of the Strathmore tournament she had a season high 12 rebounds during a 52-46 win over the host Spartans. Welch also dropped 20, of her 159 points, to get her only career double-double.

Welch’s aggressiveness she says comes from a love for the game. In practice she could be seen pushing her teammates to be better. Even if that meant she hurt some feelings along the way.

“I wanted to make sure they understood this was a game situation,” Welch said. “They would get over the fact I was mean to them.” 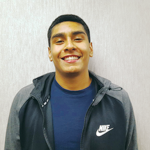 Raymond Paramo – Most Valuable Player
The Aztecs basketball program might have turned a corner this past season. Not only reaching the second round of the postseason, but in individual talent. This year’s East Sierra League most valuable player Raymond Paramo is one of those talented players.

“I am honored,” Paramo said. “For a junior like myself to be able to represent the entire league is pretty special.”

Paramo averaged 19.7 points a game during the season on his way to scoring 570 total points. This past season he broke Jeremiah Galaviz’s single season record of 533 points. Combined with the last two seasons of 153 and 339 points he became the programs second 1,000-point scorer with 1,062 points.

“It is humbling to have both of these achievements,” Paramo said. “However, I have to stay grounded with a season to go in order to not become complacent.”

In Paramo’s final season he and his Aztec teammates are looking to continue the program’s turnaround. It is without a doubt Paramo believes they can be contenders. Only time will tell as they are joining the East Sequoia League next season. 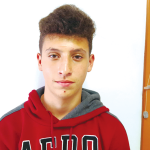 Miguel Lara – Underclassman of the Year
The Monarchs back line defense seems to be in good shape for the next three years. They will have the service of this year’s Central Sequoia League underclassman of the year award winner Miguel Lara. For Lara it came as a complete surprise.

A freshman, who made the transition straight from middle school to varsity soccer, it was a learning process for Lara. The speed of the game, especially when they played on the turf at Monarch Stadium, seemed to have doubled. The competition seemed overwhelming as well. Being 5 feet, 5 inches, he constantly had to defend senior forwards. Most of who had already developed their game. Despite all the difficulties though Lara could not think of a instance where he thought he was not ready.

“I always just tried my best,” Lara said. “Anyone can do it if they try.” 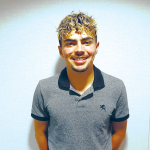 Oscar Lira – Defensive Player of the Year
A staple along the back line of the Lindsay defense Oscar Lira has been unbreakable. This season with it being his last in the Cardinal red he was named the East Sequoia League’s defensive player of the year.

“This award really means a lot to me, especially with it being my senior year,” Lira said. “I really am not use to getting awards, so this one is special.”

What makes receiving this award even more special for Lira is the fact he missed a few weeks of play. In the middle of the season Lira had to make the hardest decision of his high school career. He had the chance to travel to visit family in Mexico, but he would miss up to seven games. While it was difficult he decided to travel with his family. Then when he returned it was back to working out every day.

“I had to keep working to stay in shape so I can help my teammates,” Lira said.

Next Lira will be going to College of the Sequoias to play soccer. While there he wants to study wielding.

Jimmy Madrigal – Coach of the Year
For the second straight season the East Sequoia League coach of the year award goes to a team in the foothills area. This season it belongs to Strathmore head coach Jimmy Madrigal.

Madrigal led the Spartan soccer team to an 8-2 ESL record which put them in second place. Splitting their series with Lindsay a loss to the Corcoran Panthers in the final week cost them a share of the title. They still earned the top seed in Division VI and advance to the finals where they lost to Orange Cove in a shootout.

This past season Bermudez scored 14 goals with multiple goals happening in wins over Monache, Woodlake, and Frazier Mountain. He also had five assists, and 82 steals.

Rodriguez was a solid as any in the league. In 18 games played he finished with a record of 13-4-1. He also had six shutouts.

Winter League Awards: Marcos Ceballos and Chloe Welch are among those given special recognition in their respective leagues2018-03-212018-03-20https://thesungazette.com/wp-content/uploads/2019/04/header-logo-orange.pngThe Sun-Gazette Newspaperhttps://thesungazette.com/wp-content/uploads/2018/02/pd-Sports-LHS_Boys_Soccer_Marcos-1.png200px200px
About