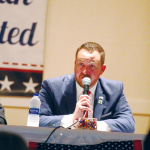 Mathis’ record on cap-and-trade quickly came to pass when Henderson asked him to explain his yes vote last year. He was one of only seven republicans in the assembly to vote yes on the measure that forces businesses to buy permits to release greenhouse gases into the atmosphere. Mathis’ yes vote was seen as a betrayal by constituents at home who see cap-and-trade as a program that hurts farmers and disadvantaged communities by driving up prices of goods.

Due to the vote cap-and-trade in California was extended from 2020 to 2030 with a goal of reducing greenhouse gases from 431 million tons in 2020 to 260 million tons in 2030. At the time last July former Governor Arnold Schwarzenegger went on record to praise the bipartisan support with free market policies.

“All of our agriculture industries, our manufacturing industries, everyone else said that this was a really good deal. Quite frankly my job in representing the largest agriculture area in the state is to ensure that we stay the largest agriculture area in the state,” Mathis said. “And when all of agriculture comes to you and you are the vice chairman of ag you listen. You say, ‘how can we protect these jobs, how do we keep our folks working, how do we ensure that as Sacramento shoves these nonsense down our throat that we are getting money back.” 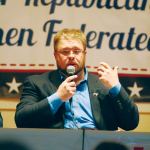 However, never publicly elected candidate and sixth generation rancher Jack Lavers piped in to express his anger with Mathis’ vote.

Lavers was given an opportunity to share his experience with city crime and public budgets given that he is a rancher without government experience. He noted his vulnerability to poachers and vandals outside of city limits. Lavers added he had come across large marijuana grows within a quarter-miles of his house and on his property and claimed they were created by cartel members who are illegal aliens.

Lavers failed to explain what experience he has in budgeting on the matter.

Henderson posed a keenly unique question over the digital divide that exists in the Central Valley and the rest of the state, asking if the candidates would support 5G Internet and cell service and how they would fund it out of the state budget.

Mathis noted that he would like to see more robust broadband Internet in his district.

“Look we’ve got to invest. We’ve got kids out doing their homework next to Starbucks because they don’t have access. That is a problem. We are working on it. I have been co-authored on bills that make sure our rural communities are not left in the dust,” Mathis said.

Lavers made it clear that he is against any state funded improvements to the area’s Internet service, instead saying that it is a task better left up to private industry. However, Lavers also took the opportunity to chastise Gubler’s leadership on the Visalia City Council for asking voters to increase the City’s sales tax in 2016 instead of cutting the budget.

“If private companies want to do it they can. Private industry is always the way to do it period,” Lavers emphasized. “[Gubler] just accused me of not understanding how budgets work and what we need is active police. How does that budget work… Now they did not want to dirty their hands with that issue so they did what sleazy politicians do they put it up for a vote in the council and then passed it off to the ballot.” 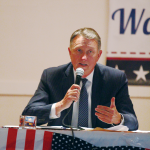 Gubler made the point of correcting Lavers in his rebuttal after noting that 5G Internet is a matter best left up to private business.

“In fact the citizens of Visalia voted on measure N to put that into place. If [Lavers] had looked at the record he would have known what happened. Citizens are entitled to vote for additional monies for public safety, for roads, and parks and recreation,” Gubler said.

Gubler was the first to answer a donor related questions when Henderson asked what kind of donors each candidate would not take money from. Gubler said he would only take money from interests in Tulare County and chastised Mathis for taking donations from the cannabis association.

“Yeah, I took 2,000 dollars from the cannabis association. They are working on a thing called medical marijuana. There is a lot really good research that helps out our veterans and other people out there,” Mathis said. “We have a huge opioid epidemic there might be something there. It might be better than people being hooked on oxycontin.”

Lavers chimed in to say that he was saddened that Gubler is only considering taking campaign contributions from Tulare County interests instead of Kern and Inyo county donors who also fall within the 26th Assembly district.

“You just alienated every single person in Kern County, in Inyo County. How dare you. We have every right to get donations from those people if we want. Their voices need to be heard,” Lavers said.