Sheriff’s Dept. says two more suspects may be at large in connection with holdups in Earlimart, Ivanhoe and Goshen

TULARE COUNTY – Three members of a band of armed robbers targeting rural stores were arrested last week, but police say two more suspects may still be out there.

The robberies began at 4:01 p.m. on Nov. 21 at the Bandar Smoke Shop, located at 530 E. Sutter Avenue in Earlimart. The store clerk told Tulare County Sheriff’s deputies that a suspect armed with a handgun came into the store and robbed him at gun point. While he was being robbed, the clerk said he saw a second suspect standing outside the store. The suspects stole $170 and ran to a getaway car parked nearby.

Later that same day at 10:50 p.m., deputies responded to a robbery at La Estrellita Market located at 15917 Avenue 328 in Ivanhoe. Two clerks told deputies they had just been robbed by two people. The modus operandi of the crimes were similar. One suspect entered the store armed with a gun and took money from the cash register, while a second suspect again stood by the door before they both ran away with an estimated $300.

The next day, on Nov. 22 at 6:44 p.m., deputies were called to an armed robbery at the Dollar General located at 6875 Robinson Road in Goshen. Again, clerks told deputies that the suspect pulled out a revolver and demanded money, which they were able to get from the cash register. The suspect then took off running with between $300 to $350 in cash. 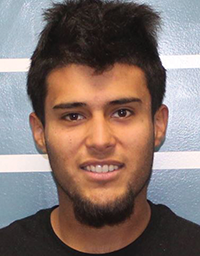 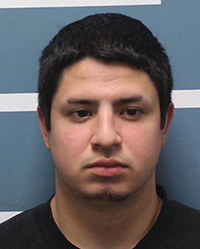 Detectives with the Sheriff’s Department’s Property Crimes unit reviewed store surveillance video from the crime scenes and believed the robberies were connected. Detectives also received a tip that the suspect captured on video at the Dollar General in Goshen was 19-year-old Marquel Licon of Tulare. Detectives found Licon at a relative’s home in the 400 Block of S. West Street in Tulare, where he was detained and later interviewed. Licon admitted to being involved in all of the robberies. He was arrested and booked at the Pre-Trail Facility in Visalia.
On Nov. 26, detectives identified two other suspects involved in the robberies as 20-year-old Roman Ruiz Cisneros and 19-year-old Joseph Nickolas Avalos, both of Visalia.

Detectives from the Visalia Police Department assisted the Sheriff’s Department with surveillance through the night. At 9 a.m. on Nov. 27, detectives were able to capture Cisneros outside his house in the 600 block of E. Houston Avenue in Visalia. A search of the home revealed evidence of the crimes including a gun, spent shell casings and the getaway car.

Later that same day at 4:05 p.m., detectives arrested Avalos at his house in the 1100 block of N. Mooney Blvd. in Visalia during the execution of a search warrant. Detectives also seized evidence from the home, which they believe is connected to the crimes. Both Cisneros and Avalos had active warrants for robbery and they were booked at the Pre-Trial Facility in Visalia. Their bail was set at $500,000 each.

Sheriff’s detectives have reason to believe there might be two additional suspects who were involved in at least one of the robberies. Therefore, anyone with information is urged to contact Detectives Jacob Fulton or Scott O’Neill at the Tulare County Sheriff’s Department by calling 1-800-808-0488, anonymously emailing [email protected] or by texting or calling 559-725-4194.

Sheriff’s Log
Wednesday, Nov. 21
A Visalia convenience store was among three businesses busted for selling tobacco products to minors. The Am/Pm Convenience Store, 9017 E. Crowley Ave. in Visalia, was cited for selling tobacco to minor decoys attempting to purchase tobacco products from licensed retailers under the direct supervision of deputies. During the two-day operation, deputies also caught two Tulare stores, Tulare Finest Smoke Shop (569 W. Bardsley) and Doc’s Corner (14002 Avenue 232) selling to minors. In collaboration with the Department of Justice, the Sheriff’s Office is conducting retailer tobacco compliance checks to educate store owners and reduce the availability of tobacco products to minors throughout rural communities of Tulare County. Statistics have shown that youth tobacco use in Tulare County is above average at 15.4%, when compared to California’s 13.8%. This project is being made possible by the Department of Justice Tobacco Grant (STAKE – Stop Tobacco Access To Kids) and Proposition 56 funding, which taxes tobacco and e-cigarettes sales $2.87 per pack.

Friday, Nov. 30
Tulare County was able to scratch another name of its Top 10 Most Wanted Fugitives last week. Detectives with the Tulare County Sheriff’s Office County Apprehension Team Tracking Criminals in Hiding (CATTCH) unit were notified of the whereabouts of 24-year-old Nathan Reed of Lemon Cove. Detectives began surveillance on a home in Lemon Cove and ultimately found him hiding in the closet. Reed was wanted for possession of a concealed firearm and for being a felon in possession of a firearm and ammunition. Reed was previously arrested just two months ago on Oct. 7 as part of a burglary investigation in conjunction with the Fresno County Sheriff’s Department. Reed, along with 28-year-old Phillip Lowe of Exeter and a suspect in Fresno County, were arrested after finding five stolen vehicles and 65 pieces of antique farm equipment.