County has highest rate of food stamp users in state

TULARE COUNTY – Tulare County’s farms put food on the tables of families worldwide. Yet, the county has the highest rate of food stamp participation in California.

“It is unacceptable that we have such a high food insecurity rate,” said Nicole Celaya, the executive director of FoodLink, Tulare County’s only independent food bank. “We are the biggest agricultural producing county in the state, Tulare County contributes about $8 billion to the economy.”

In Tulare County, 19 percent of people are in poverty, which can partially explain the high rates of food stamp use. There are also extensive outreach efforts, carried out by government agencies, food banks and local nonprofits, that help people access benefits.

“We are working toward big changes, which are absolutely possible,” Celaya said. “Hunger is a man-made problem, so there are solutions. There’s absolutely no reason hunger should exist.” 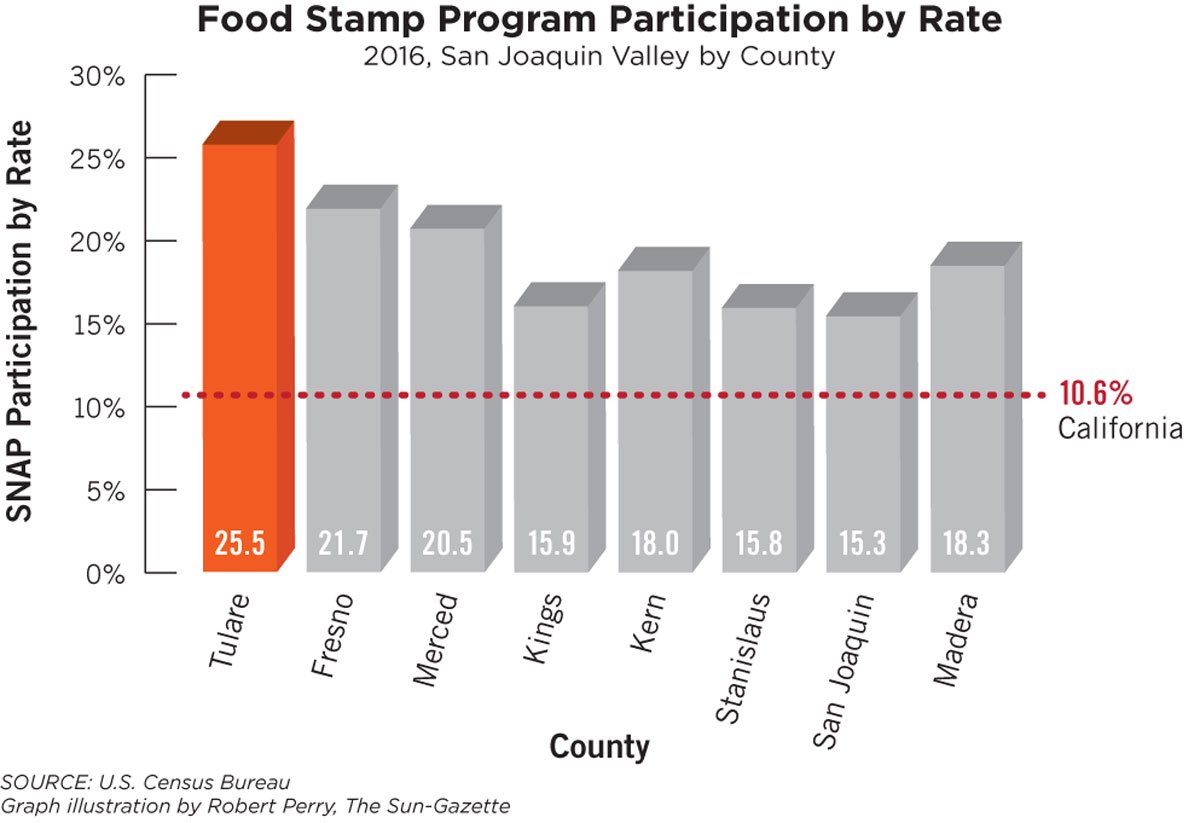 Only four counties in California have a food stamp participation rate above 20 percent and three are in the San Joaquin Valley, according to census data. More than 117,000 people in Tulare County rely on food stamps, which is 26 percent of the county’s population.

Imperial County has the second highest participation rate at 22.8 percent. Fresno County has 21.7 percent and Merced County has 20.5 percent.

Counties are responsible for managing state and federal food stamp programs, said Vienna Barnes, the deputy director of the self sufficiency division of the Tulare County Health and Human Service Agency.

“We are actually going out and helping people get services and learning what their needs are,” Barnes said. “Which means that staff can also be advocates for communities within the agency.”

Supplemental Nutrition Assistance Program, or SNAP, is the federal version of food stamps. CalFresh is California’s variation. Both divvy out a certain amount of funding each year to counties, Barnes said.

The state pays 35 percent of CalFresh’s administrative costs, counties pay 15 percent and federal funding makes up the other half.

CalFresh provides monthly benefits to low-income individuals and households to help them buy food. They’re given an electronic benefit transfer (EBT) card, which can be used at most grocery stores and some farmers markets.

The amount of benefits someone can receive depends on the size of their household, income and other living expenses. CalFresh and SNAP are only available to citizens and legal residents.

The federal government gives SNAP funds to each state. The states use that money to fund their own food stamp programs. California’s 2019-2020 budget doled out $639 million to CalFresh.

However, California struggles to get food stamps to those who need them the most. In 2016, the state enrolled just 72 percent of eligible residents in CalFresh, which left behind about $1.8 billion in federal funding, according to reporting by CalMatters.

In Tulare County, CalFresh benefits reaches over 90 percent of hungry residents, according to state data on CalFresh’s reach.

“We do have a lot of opportunities to be embedded in communities and help people get access to services,” Martinez said.

Celaya, from FoodLink, commended the county for its outreach efforts.

“The county office does work hard to get the word out about food stamps and get people signed up. They are good at outreach and going directly to communities to meet people,” Celaya said.

But Celaya said the needs in Tulare County have not been met, and to eradicate hunger involves effort from more than just one group.

“It takes a lot of different organizations and departments to serve the community the way it deserves,” Celaya said. “We try to be equitable and reach as many communities as possible. The need is just high and it’s very difficult to meet the needs of everyone in the county.”

There are five district offices and 21 smaller outreach offices throughout Tulare County. Each place is able to help people enroll in CalFresh. The county also offers an expedited application for people who immediately need assistance. Residents can also apply for benefits on the agency’s website.

“That’s what really helps to get the information to people who need it,” Barnes said. “The access is there for people throughout the county. We make it very easy to apply.”

The agency also works with other departments within the county to help people access services. County supervisors also do their part to inform people in their districts, Barnes said.

Moreno said another reason for the increase in food stamp use in Tulare County is how much easier it is for people to access benefits.

In addition to visiting a county office, people can also apply by calling the county or applying through the county’s CalFresh website. Moreno said those options are not only convenient, but people seeking benefits won’t have their pride hurt asking for help.

“You don’t have to see someone in person to apply for food stamps, you can skip the shame of going to an office,” Moreno said.

At the federal level, food stamp funding continues to be threatened. The United States Department of Agriculture, which administers SNAP, recently announced a new rule change that would change how the program factors in a recipient’s utility expenses when determining their benefits.

The current law allows for variances to accommodate different utility costs. The new change would standardize that calculation nationwide. The change is estimated to impact 3 million Americans and result in cuts to food assistance by $4.5 billion over five years.

This June, the state decided to extend CalFresh to Supplemental Security Income (SSI) recipients, a major victory that was a long time coming in California, said Andrew Cheyne, the director of government affairs for the California Association of Food Banks.

“This was especially important for the aging Californians and people who are disabled who also face food insecurity,” Cheyne said.

SSI is a federally funded program that provides monthly funds to low-income people who are 65 or older, blind, or disabled.

Just by allowing SSI recipients to qualify for CalFresh, 280,000 more eligible people were connected to food stamps. Before this historic change, California was the only state to bar SSI recipients from CalFresh eligibility.

There were also two bills recently signed by Gov. Gavin Newsom that will support food banks and CalFresh.

Assembly Bill 614 will expand the list of food items that can be donated by farmers to a food bank for tax credit. Assembly Bill 1377 will establish a stakeholder group tasked with examining data to find efficient ways to streamline enrollment in free/reduced meal programs in schools into CalFresh benefits.