The much improved walk and bike path lining Belmont from Citrus Plaza to Chestnut has been aesthetic as it is practical. Residents have been able to enjoy the lighted walkway at night, and the rural landscape during the day.

“All we are waiting on now is irrigation. So we’re almost done with that project,” Exeter city manager Adam Ennis said.

The path is the first stretch of the border in Exeter’s southwest specific plan where all intended growth is intended to go.  However, gathering the land for a reasonable price in 2016 was difficult to come by. The property, now owned by the city, is 60 feet across from the middle of Belmont to 10 feet west of a ditch that is now underground. And while 77,408 square feet may seem like a lot of land, it is decidedly unusable property. 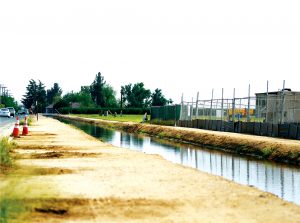 Looking south, this is what the west side of Belmont Road in Exeter was like before the pedestrian-bike path began in 2017. Photo by Paul Myers.

Twenty feet is consumed by the road, and the remaining 40 feet was split by the 20 foot ditch. Therefore, the city was perplexed as to the reason why the Exeter Unified School District Board was unwilling to previously consider the matter. And as a result, hold up a $1.3 million improvement that is crucial to plan.

Because of the low assessment of the property, the City offered the District $7,300 plus an additional $8,550 to rent an added 10 feet west of the ditch for operational use. An offer the Board did not so much as discuss in public session during their meeting in March. Although during their April 13 Board meeting the Board finally discussed their concerns.

Trustee Dean Sutton first noted that the City did not approach the District prior to applying for funding for the improvement, implying that the City assumed the sale of the property. City Manager Randy Groom who spoke on behalf of the City at the meeting stated that he did not foresee the divisiveness over the issue.

Also, Sutton introduced the prospect of a land swap deal with a Beverly Hills developer approximately 10 years ago, prior to the Great Recession that sent property value’s plummeting. Sutton contends that initial paperwork was in the works to trade the 20 acre property the District currently owns for a 25 acre property the developer owns.

Sutton noted that the developer planned to do all of the work of a walkway, asphalt, curb and gutter, plus utilities. However, the deal had been stalled since 2008, and nothing had so much as moved forward since.