As funding is cut short, the future of Visalia’s next high school is uncertain

The cost of the new campus and available state funds have changed, leaving district officials to reevaluate plans

By Annabelle Williamson
Special to The Sun-Gazette

VISALIA – Plans for a fifth high school in Visalia have hit a snag as the estimated costs to build the new school have risen and anticipated state funds for the project have shrunk.

Talks of the school began in 2017 when Visalia Unified School District (VUSD) started developing plans for a new campus on the northwest side of Visalia, next to Ridgeview Middle School. At the time, the District estimated it would cost $150 million.

To cover the cost, VUSD put a $105.3 million school bond, known as Measure A, on the November 2018 ballot, which passed with over 60 percent of the vote. Along with modernization and security projects, the measure would cover $75 million of the new school, and at the time, voters were told the other half would be matched by the state of California.

But less than two years after Measure A’s passage, the price of the fifth school has increased to $189.9 million and the state’s expected contribution has decreased to $44.6 million. The state funding wasn’t a sure thing, school district officials say, and now any money from California depends on the passage of Proposition 13, a statewide school construction bond on Tuesday’s primary ballot.

According to school district officials, the estimated cost of the new school increased after a public survey, seeking feedback from teachers, administrators, parents and community members, changed the design.

The latest estimation — which includes the cost of a stadium, baseball and softball fields, a theater, tennis courts and a gym — is based on data from other high school construction projects in surrounding districts, according to district officials. 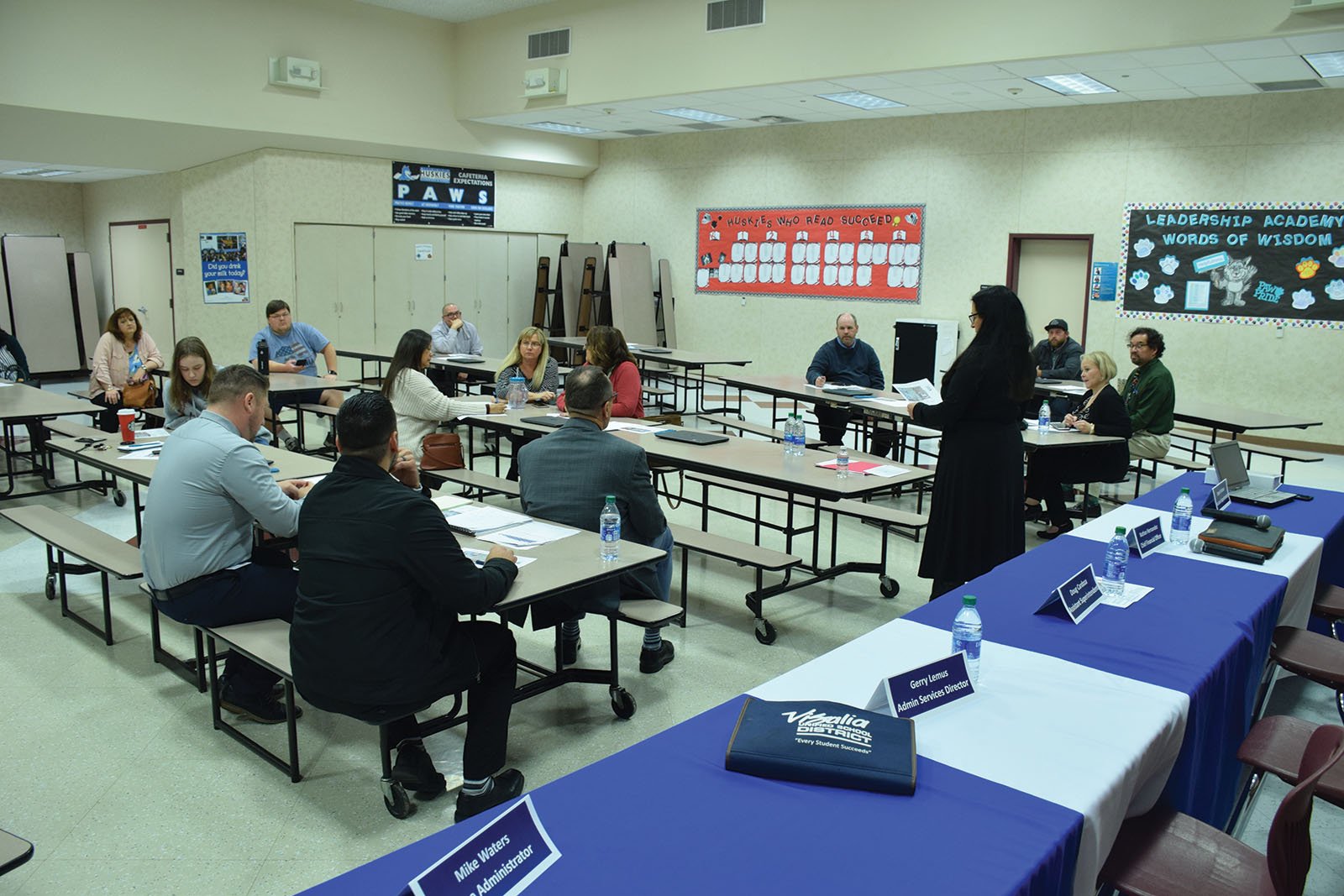 As VUSD considers how to move forward, school district and board officials have turned to the public for input. On Feb. 12 and 24, Dr. Tamara Ravalín, VUSD superintendent, and other district officials hosted outreach meetings where parents, teachers and community members were able to question the district.

Discussions at these meetings were wide-ranging. Attendees asked district officials a variety of questions: Why does a new school need to be built? Why doesn’t the district try to redraw the boundary lines so that student populations are more balanced? If the new high school doesn’t get new facilities, how long will Visalia have to wait until they do?

Robert Gröeber, assistant superintendent of administrative services, is leading the implementation of the Measure A project. “I think one of the important things that we hear … is folks think this high school is about growth and it’s not about growth,” Gröeber said.

“What we were trying to focus on is increasing the access and opportunity for all kids. What we know is in smaller high schools, more kids have the opportunities to participate in those extra and co-curricular activities that connect them to school,” Gröeber said.

VUSD’s ultimate goal is to cap all high schools at 1,800 students, and to have each of Visalia’s five middle schools feed into their own high schools, Gröeber said. Ridgeview would no longer send kids to Redwood and El Diamante. After the new school is built, Ridgeview would serve as its feeder.

“Without the fifth high school, they will all be over 2,000,” Grober said. “That’s too large to ensure equity and access and opportunity for all kids.” 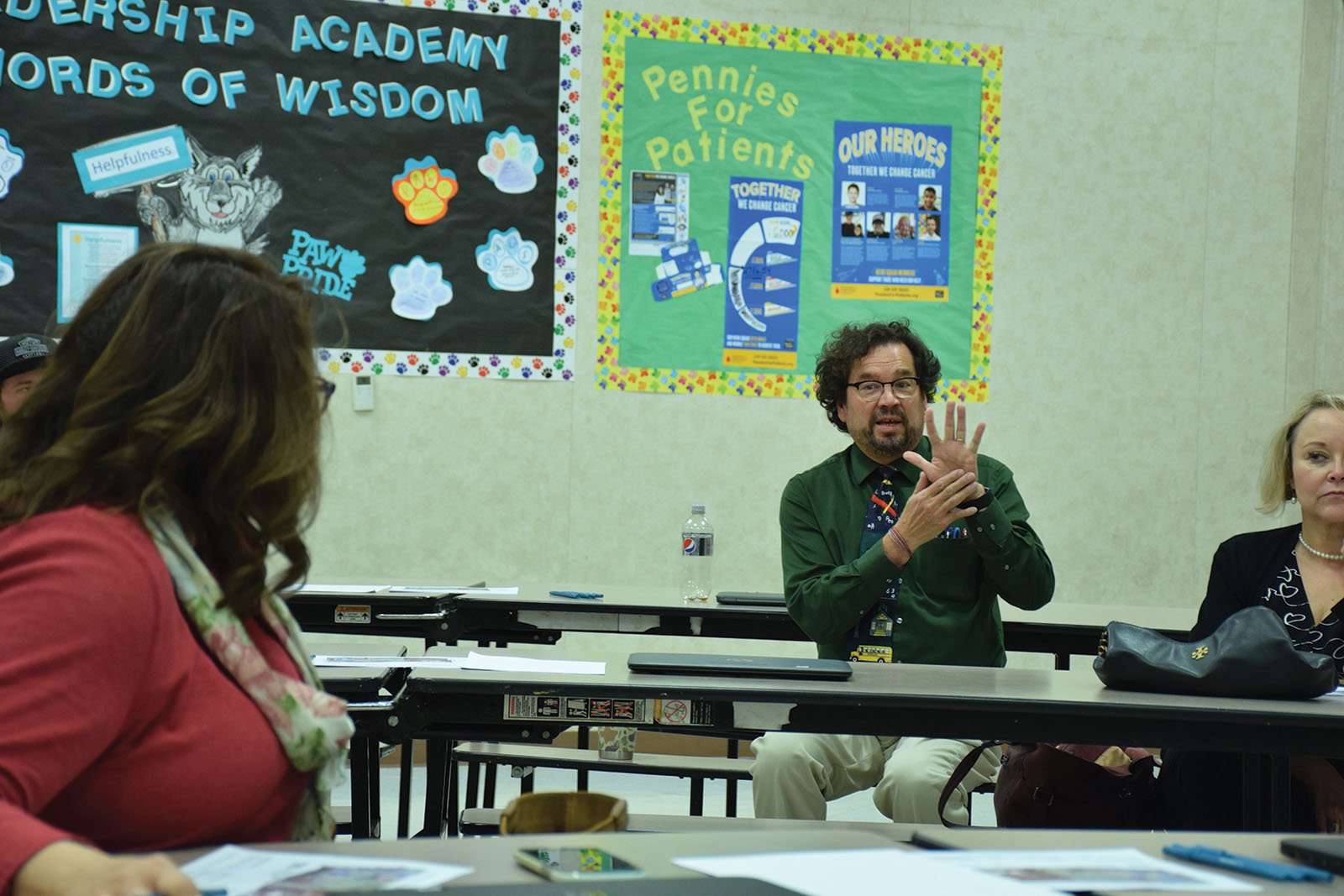 John Crabtree, president of the Visalia Unified Board of Education, said going forward, the board must decide what to prioritize and reckon with what amount of state funds, if any, will be available.

“That’s a decision we have to make and see which option has the most logic. We do need a new high school, even if there isn’t an increase in enrollment. With redistricting, each high school would be above the ideal 1,800 student population.” Crabtree said.

If the new school is built, enrollment numbers at the pre-existing high schools are expected to lower, as the new high school will be the biggest, with 2,000 students projected to be on its campus after opening.

After the fifth high school opens, the district’s student population estimates are based on projections for VUSD’s middle schools. According to the district’s calculations, in 2028, Redwood is projected to be at 1,430 students, falling from today’s 2,365.

“After conducting quite a bit of research, it was decided to start El Diamante with 9th graders only. The main reason was that very few students would likely want to transfer for their 10th grade year after starting at another high school,” Waters said.

If the funding gap can’t be resolved, the fifth high school has the potential to be built in phases the way El Diamante was built. El Diamante initially opened without a pool, all-weather track, and shop buildings. Those elements came over a five-to-seven-year period as new money became available for construction projects.

Darice Vieira, a VUSD bond oversight committee member, has been actively engaging in the process of designing Visalia’s fifth high school and exploring how best to use Measure A funds.

“Shared facilities are hard, but because of the cost to build them, I don’t know how realistic it is to think that every high school in town is ever going to have their own stadium,” Vieira said.

VUSD hopes to fund a portion of the new school through state funds. But after the amount of potential funding from the state dropped, the district is considering having the fifth campus share facilities with other surrounding high schools, like how El Diamante shares Groppetti Community Stadium at Golden West.

The new high school could share facilities such as a stadium, pool, or theater until there is more money available for these buildings. Vieira said the district should adjust the wording on the survey it uses to gauge the public’s opinion on the new campus.

“I think our survey needs to say, ‘if you could have a new high school, but you aren’t going to get any of those facilities for perhaps, 5-10 years, is that still something that you think is more important than balancing out and using the shared facilities that we already have?” Vieira said.

Although this might be a possibility, parents and community members at the February meetings have raised the question of how it would affect culture at the high school.

“You can do things without having a theater on your campus, but you have a hard time competing in things such as water polo and swimming if you don’t have a pool on your campus.” Vieira said.

If Proposition 13 fails to pass in the upcoming primary, the money coming from the state will fall to zero, and the district will wait until November to have another chance at state bond funds, Gröeber said.

Measure A states that the $75 million that was set aside for the construction of the fifth high school does not have to build the new school. If additional funds to build the new campus don’t come through, VUSD can spend the Measure A funds on other projects listed in the bond.

According to school district officials, Visalia Unified’s school board decides what the priorities are and where the money from Measure A is used.

If Prop. 13 passes on Tuesday, the board is planning on moving forward with the new high school and submitting their plans to the state in order to get in line for funding, in hopes of getting the projected $44.6 million from state funds.

After moving forward with the school, the process can take three to five years to complete, according to Crabtree, VUSD board president, which is why submitting plans early to the state is a top priority for the board.

– This story was co-published with the Redwood Gigantea, Redwood High School’s student newspaper.