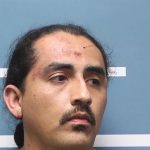 EXETER – The coronavirus can linger on your vehicle’s interior for three days but the only social distancing car thieves are practicing is waiting for you to walk away from your car.

While Exeter residents were trying to get a workout in walking up Rocky Hill, Refugio Ortega of Lindsay was casing cars for wallets and purses to steal at the base of the hill. Tulare County Sheriff’s detectives had noticed an increase in car burglaries along Rocky Hill Drive in the past few weeks and had identified Ortega as the primary suspect. Ortega had an active felony warrant for violating the terms of his supervised release. He was also a person of interest for several other agencies for multiple serious felonies, so detectives decided to stake out the area.

On April 16, detectives saw Ortega and another man peering into the window of an empty car on Rocky Hill Drive. When detectives approached the two men, Ortega ran off, throwing a loaded gun down while he was running. When one of the detectives caught up to him, Ortega became violent. The detective was able to subdue Ortega and take him into custody. The gun was also found to be stolen out of the Lindsay area.

The other man, 34-year-old Alonzo Ruiz of Porterville, surrendered without incident. Ruiz also had a felony warrant for violating the terms of his supervised release. Both men were in possession of meth and had arrived at the scene in truck that had been reported stolen out of Porterville. Both were booked on multiple felony charges.