VISALIA – The death of three teens led friends and family to hold a vigil at the Golden West parking lot where they died.

According to Visalia police reports, Jose Hernandez-Pena, 19, Isaiah Rule, 18 and Blake Medeiros, 19, were shot and killed at Golden West High School. Officers responded to a shots fired call at approximately 11:15 p.m. on Tuesday, May 5, but the boys were already deceased when they arrived.

The Visalia Police Department had not announced any arrests or suspects as of press time.

By Wednesday night, May 6, family and friends held a vigil in the boys’ honor. Cars were parked along the entrance into the parking lot in front of the barricade where a sign was taped listing the boys’ names. More than 130 people came by the vigil to leave votive candles, flowers, photos and mementos of the three young men on one of the pillars to the parking shade near where the boys were shot and killed. Some used a marker to write messages along the concrete base of the pillar.

Isaiah’s mother, Nikkole Rule, said her son had a big personality that could fill a room. He was goofy, fun-loving, loud and enjoyed every moment of every day.

“He said he wanted to buy me a house and take care of me because I took care of him,” Rule said. “He was my best friend and he was so loved.”

“Blake was also like a son to me,” Rule said. “I didn’t know Jose that well but my son had a tight group of friends.”

Blake’s cousin, Kevin Knowles, grew up playing football with Isaiah and Blake. He said his cousin always wanted to be around music. He played the part of rapper with tight pants, Gucci belts and fancy shoes. He said Blake was an outstanding athlete who could play almost any position on the football field. He said family was important to Blake who had his grandmother’s name tattooed across his neck and his mother’s name on his arm.

“[Blake] was really funny,” Knowles said. “He loved to joke around.” 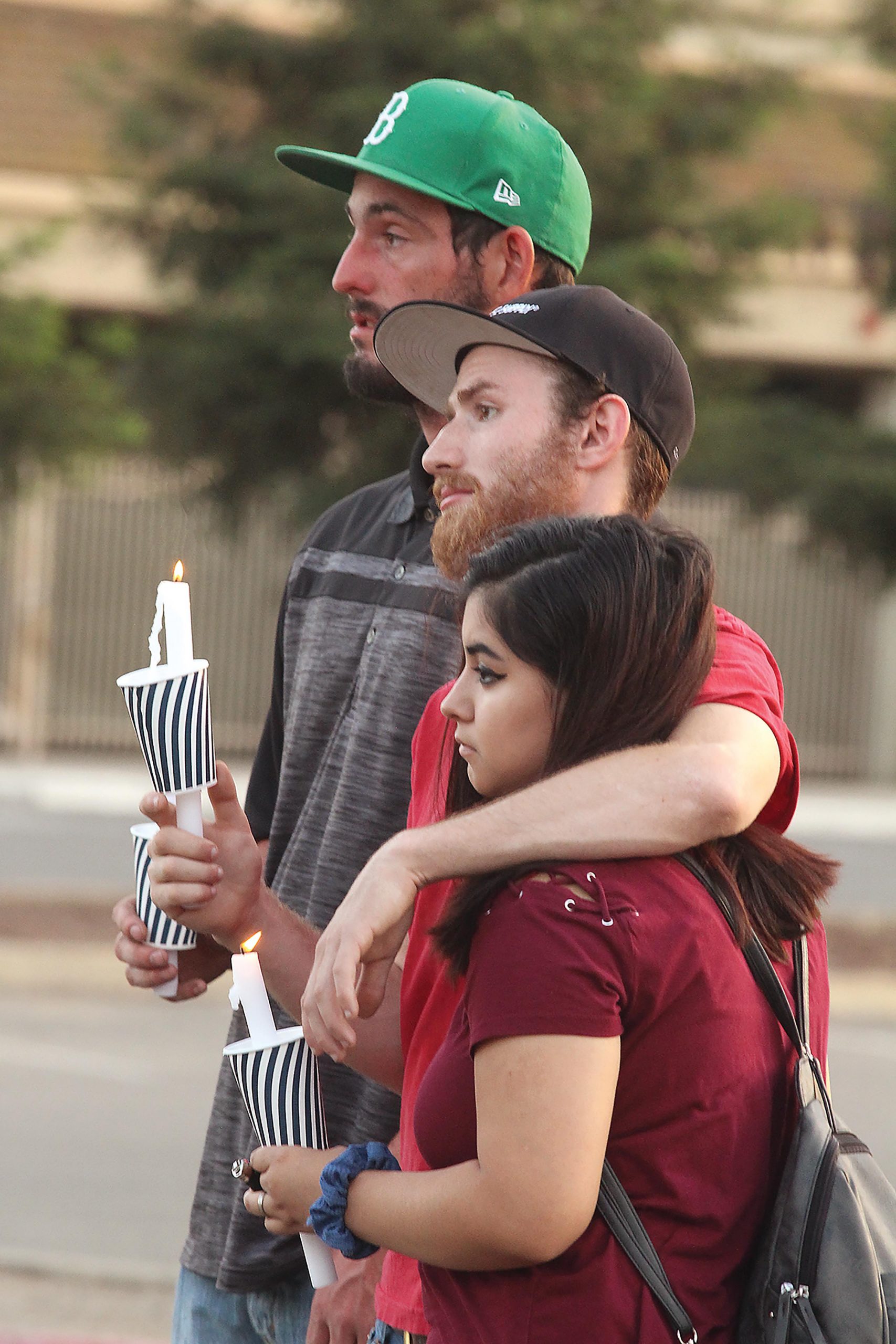 Knowles was also good friends with Isaiah, who he said was easy to talk to and was always acting as a mediator between friends and family.

“He never wanted anyone to fight and was always trying to get people to get along,” Knowles said. “They were both my brothers and I considered them both family.”

Tim Wilson, a friend of Isaiah’s, said he had known him for eight years going back to middle school and considered him like a little brother. He said they used to hang out together almost every day but hadn’t been as close in the last few months. He said Isaiah and Blake both loved to play football and were teammates on the tackle youth football Pioneers. He described Isaiah as outgoing and Blake as adventurous. He said they both liked hip hop music and were known to create their own rap and share it with friends.

“He was always talking about getting out of Visalia, traveling and seeing new places,” Wilson said. “What happened to him shouldn’t have happened. I wish I could have done something about it.”

Isaiah’s grandmother, Susie Garza, said Isaiah was on track to get his GED next month. She said he loved burgers and was drawn to the beach. He didn’t necessarily like to swim in the ocean or the sand, but he felt inspired there. He loved music and creating his own and enjoyed being with friends and family.

“He was a very friendly and caring person,” Garza said. “He would give you the shirt off his back if you needed one. That’s the kind of person he was.”

Rule’s family started a GoFundMe page for Isaiah’s funeral. The page, which has raised almost $3,000 of the $10,000 goal, stated the following: “We as a family still have so many questions about why God took him so soon from us. As we grieve, we are asking friends and family to come together through this rough time. We are asking for any donations that will help with the cost of arrangements. He is loved by many but most of all his Mother Nikkole Rule, his brothers and sister will forever miss him! Isaiah was kind, genuine, and loved traveling with his grandma Susie! Please keep our family in your prayers, thank you in advance!”