The Golden State Killer, Joseph James DeAngelo Jr., pleads guilty to 88 crimes, one of which is for the first-degree murder of COS journalism professor Claude Snelling in September 1975

In a California State University, Sacramento ballroom, former Exeter police officer Joseph James DeAngelo Jr. admitted his guilt to 62 different rapes, 13 murders and 13 cases of kidnapping. All in exchange of the death penalty.

It is expected that DeAngelo will be sentenced to life in state prison without the possibility of parole. The sentence will run consecutive and concurrent to the sentence for his first degree murder pleas. 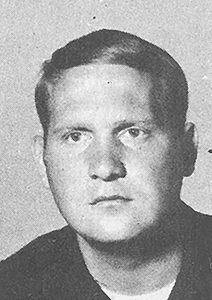 The Sun-Gazette, then bannered The Exeter Sun, published this photo to introduce Joseph James DeAngelo Jr as a new city police officer on May 22, 1973. File photo.

DeAngelo spoke weakly to all of the 88 crimes, saying nothing more than “guilty” and “I admit” as Judge Michael G. Bowman asked for his plea over several separate instances.

According to a joint press release sent out by the district attorney’s offices for Contra Costa, Orange, Sacramento, Santa Barbara, Ventura and Tulare counties, DeAngelo admitted to more than 161 uncharged crimes related to 61 uncharged victims.

Deputy district attorney for Tulare County David Alavezos spoke early in the hearing to the cases of murder, attempted murder and kidnapping in Tulare County. Alavezos first recounted the murder of College of the Sequoias journalism professor Claude Snelling in 1975.

Just before 2 a.m. on Sept. 11, 1975, an intruder rode to the 500 block of Whitney Lane on a bicycle he had stolen two days earlier. He entered the back door of Snelling’s home and went through Arlene Snelling’s purse before creeping into the room of 16-year-old Beth Snelling. When she awoke, he was on top of her with his hand over her mouth saying that if she screamed he would stab her. When she began to struggle, the suspect drew a handgun and pointed it at her.

Alavezos said that he attempted to abduct Beth when he took her out of her room, through the family room and to the back door. Snelling woke up and yelled out “hey” and ran toward DeAngelo and Beth.

“Beth Snelling witnessed DeAngelo twice shoot her father from a distance of 10 feet…and then kicked Beth three times in the head before running away,” Alavezos recounted.

Alavezos said the bullet retrieved from Snelling’s autopsy matched bullets fired from a .38 Miroku revolver stollen from Patrick Mono during an Aug. 31, 1975 ransacking. Alavezos added that Mono positively identified DeAngelo from a stack of pictures in 2018. Beth also positively identified DeAngelo from a stack of photos. She remembered his face from when he was peeking through her bedroom window a month before the Sept. 11 murder.

Alavezos also recounted the attempted murder of Visalia police detective Bill McGowen on Dec. 10, 1975. According to Alavezos’ statement, the Visalia Police Department set a perimeter near the 1500 block of West Kaweah. McGowen, who was posted in a garage saw a stocky suspect about 5 feet, 11 inches tall walk around the side of the garage.

According to Alavezos’ statement, DeAngelo put his right hand up and said, “I give up. See, see, I have my hands up.” When McGowen demanded to see DeAngelo’s left hand, he reached into his left jacket pocket and shot at McGowen. The bullet hit his flashlight which threw bits of glass into his face and eye causing moderate injuries. DeAngelo then ran away.

Tulare County district attorney Tim Ward said in a joint press release that DeAngelo’s plea is not going to sooth victims who were harmed during his decade long crime spree.

“The crimes committed by the defendant in Tulare County were never eligible for the death penalty based on the law in 1975. It is important to note that he will be sentenced to the maximum for those crimes,” Ward said. “It would be incorrect to describe today’s events as ‘closure.’ The countless victims in this case will still feel the pain of tragic loss—loss of family, loss of innocence, loss of ever feeling safe again—because of the terror inflicted by the defendant. I am proud to stand with these victims, whether they are from Tulare County or elsewhere, to see justice move forward.”

The decision by prosecutors to accept DeAngelo’s offer to plead guilty to the 88 charged crimes and admit to the uncharged crimes was made in consultation with the victims and their family members. The totality of the circumstances, including the age of the victims, the age of witnesses and the death of other key witnesses, and the age of the defendant, were taken into consideration.

The joint press release stated that the scope of the case was so massive it included 1.3 million pages of discovery. Which prosecutors say, “would have unduly burdened the victims with a lengthy prosecution that was anticipated to take as many as ten years.”

Victims will have the opportunity to provide impact statements beginning Aug. 17 of this year, the date that DeAngelo is slated for sentencing.