TULARE COUNTY – If you were stuck in a rut from sheltering in place, Tulare County found a way to shake things up last week.

A magnitude 5.8 earthquake rumbled through most of the Valley on June 24 rattling dishes, setting off car alarms but luckily not much else. The 5.8 quake originated just south of Lone Pine at about 10:40 a.m., which kicked off a cluster of other aftershocks ranging in magnitudes from 2.5 to 4.6 between 10:45 a.m. and 11:27 a.m. Lone Pine is located in Owens Valley near Mount Whitney between the eastern peaks of the Sierra Nevada and the western peaks of Inyo Mountains in Inyo County. Visalia is about 75 miles from the epicenter.

More jarring was the Emergency Alert that went out to county residents moments after the shaking began. An Emergency Alert went out 24 seconds after the initial quake that warned, “Earthquake! Expect shaking. Drop, Cover, Hold On. Protect yourself now. – USGS ShakeAlert.

The U.S. Geological Service (USGS) estimated there was “little to no” landslides, liquification or other types of property damage. Most of Tulare County only registered “light shaking.” 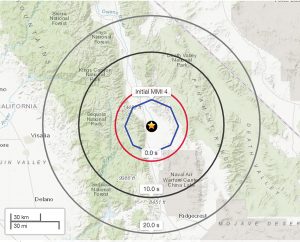 A 5.8 earthquake east of Mount Whitney rumbles through Tulare County; no damages reported. Map courtesy of the U.S. Geological Service.

Visalia Vice Mayor Steve Nelsen, who is also executive director of Downtown Visalians, said he had not heard any reports of damages to downtown, which has some of the oldest buildings in the county. He said people working in the upper floors of the Bank of the Sierra building had come outside during the shaking, but then went back in shortly after it ended. He said one small business owner was shaken because she had experienced an earthquake in Mexico that had caused significant damage in her hometown. The private security firm that checks in on buildings told Nelsen there were no reports of damage.

“People were really concerned but there doesn’t seem to be any issues,” Nelsen said. “It was a different kind of sensation.”

Tulare County’s Office of Emergency Services (OES) confirmed there were no reports of any damage throughout the county.

“They have been in contact with cities, state and federal partners, other County departments, and local agencies through their Earthquake assessment protocols,” said Carrie Monterio, spokesperson for the county’s Health and Human Services Agency. “Based on our local assessment no damages have been identified in Tulare County at this time.”