WOODLAKE – The pandemic has changed the face of nearly everything in the last four months, including the Woodlake City Council.

At the beginning of the year former city council member Greg Gonzalez forfeited his seat because of several unexcused absences. As of May 26 the city swore in his replacement, Emmanuel Llamas. 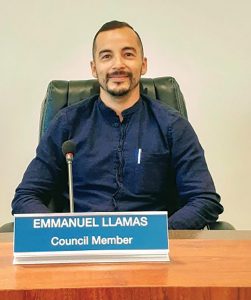 A Woodlake native, Llamas spent the better part of his 20s in Los Angeles working for a couple of startup tech companies. It is only fitting that he is also the only Woodlake city councilman to ever be sworn in digitally.

“It was interesting. But [not ceremonial] in a way,” Llamas said about being sworn in over Zoom. “But now I’m a pioneer in the digital sworn in realm.”

Besides growing up in Woodlake, Llamas also worked for the city between his two stints in LA. Between 2016 and 2018 he worked as a code compliance officer and did some city planning work during. Llamas said that helped build a relationship with city staff and get a grasp for what the city does.

“Having that relationship with the team there and learning how the city runs, and how the city works…got me interested in serving the city in the capacity of city council,” Llamas said.

Now he works as a compliance officer with the California Ag Labor Association (CALA). The newly minted councilman said that he spends his time with farm labor contractors and packing house operators making sure they are “keeping up with all their safety protocols.”

Executive director for CALA, Llamas’ boss, is coincidentally the mayor of Woodlake, Rudy Mendoza. The two see a lot of each other whether it is with work, or over Zoom during council meetings.

“I see that guy every day, unfortunately,” Llamas said jokingly.

With Llamas’ seat up for grabs in November, he hopes to win enough votes to keep it for the next two years. If he wins, he’ll still be serving the remainder of Gonzalez’s term which was renewed in 2018. If he wants to serve his very own term Llamas will have to win in 2022.

At least for the time being Llamas would like to see the city continue to grow it’s availability of housing and business.

“From there a lot of things can happen like recreation sports. Because I want to see the population grow and people move in to see what is in the area to work,” Llamas said. “I think the city staff has done a great job at making that work and I want to keep Woodlake growing.“

It isn’t as if Llamas hasn’t been at the ground floor of some major development before. Between 2012 and 2016, the 30 year-old city councilman spent time at two tech startups.

He started at Zerk, a car service company, as a city operations liaison. The company has since pivoted toward dashboard logistics and changed their name to Stradum. But before that, Zerk was a smart phone application company where users would request to have their car serviced during work hours. They also provided on demand valet parking.

“It was Extremely rewarding but challenging…it took a lot but it was a great experience. [And] some of those experiences I hope to bring back to Woodlake…like in our commerce and recreation,” Llamas said.

The second start-up he worked for was healthcare related called Heal, where he worked as an operations coordinator. Another smart phone application company, users could request a primary care physician in their area. And instead of going into the doctors office, the physicians would meet patients in their home. The idea was to provide a more holistic perspective to care.

After two years back in Woodlake, Llamas returned to LA to work for a third startup called OneStep as a client experience manager. The company is a database software platform for rehabilitation clinics. Residents of the clinic would be entered into the database with a full breadth of their medical history and stays at different rehab facilities.

But after some time reacquainting himself in Los Angeles, Llamas decided it was time to come back home. This time, maybe for good. At 30 years old he felt it was time to trade in the bustling streets of big city living for wide open spaces. And swap the time spent in traffic, for unencumbered passage.

“I think at this point I’m more inclined for a slower living in a community based [city]. Somewhere I can get some land and start a family,” Llamas said.