Tulare to shelter all of its homeless by January

City Council approves $500,000 for 76-bed low barrier shelter and directs staff to apply for funding to place 15 housing units in the downtown area

At its Aug. 4 meeting, the Tulare City Council approved a plan to spend $500,000 in housing funds to erect a 76-bed emergency shelter and directed staff to seek funding to place 15 pre-fabricated housing units in the downtown area.

Dave Clevenger, CEO of Lighthouse Rescue Mission in Tulare, said the two projects could help house 100% of its homeless by January 2021. There are 199 homeless in the city of Tulare as of January, when the Point In Time survey is conducted by the Kings-Tulare Homeless Alliance each year. Nearly three-quarters of the homeless in Kings and Tulare County are unsheltered. Tulare currently has 63 shelter beds between various agencies, leaving the city about 136 beds short of sheltering all of its resident homeless. Between the 76-bed emergency shelter and the 15 pre-fabricated housing units that can each house four people, Clevenger said the city could house 100% of its homeless by January.

“We can get to zero [unsheltered homeless] by Jan. 15,” Clevenger told the council about project PIT Stop, in reference to Point In Time (PIT) survey which will be conducted again on Jan. 15, 2021.

The tight timeline is important because of a 2018 appellate court decision barring cities from forcing homeless people out of sleeping in public parks if the city doesn’t have enough low-barrier shelter beds for unsheltered residents. The 9th Circuit Court of Appeals’ ruling in September stated prosecuting someone for sleeping in a public place is cruel and unusual punishment, a violation of that person’s 8th Amendment rights, unless the enforcing agency provides a low-barrier shelter for homeless people to sleep and they refuse to seek shelter there. The term low-barrier refers to a shelter that does not have any restrictions to enter. In other words, it does not require those seeking shelter to be sober, participate in a religious program, or separate families based on gender.

The number of unsheltered residents is based on the city’s Point In Time count. If they can complete the two projects on time, Clevenger said it would give the police department “a tremendous tool” to clear out every homeless encampment within the city limits. By having enough shelter beds to equal or exceed the number of homeless, Tulare Police officers could provide every person living in an encampment with three options: 1. Leave the area; 2. go to a shelter; or 3. go to jail. 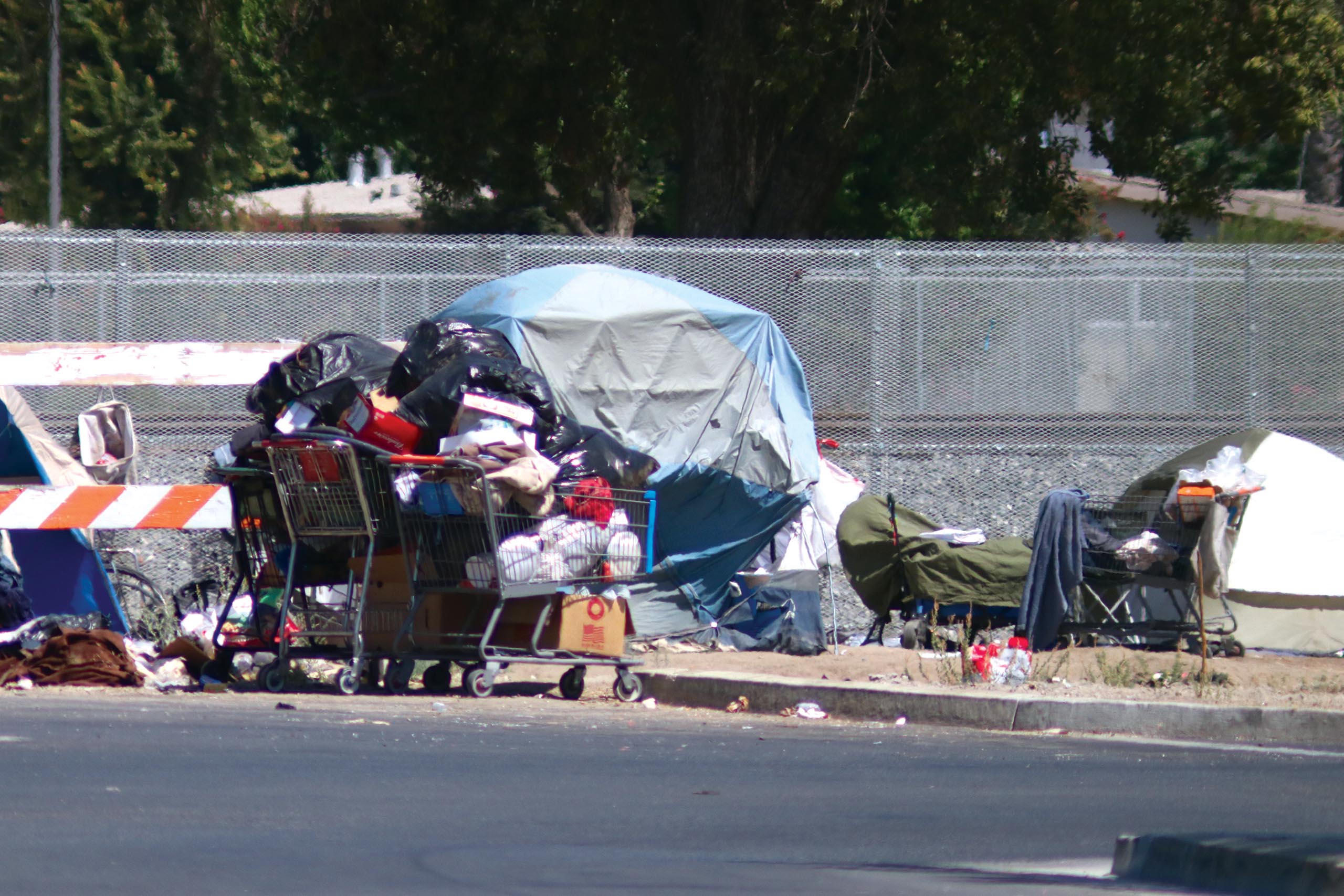 Homeless have been living in tents and cars near the railroad tracks at Pleasant and I in Tulare for years with little services available to them. However, the city has approved $500,000 for a low barrier shelter.Photo by Paul Myers

“I really want to applaud the council for taking that first step to get something going on this because I can tell you right now, what we’ve been doing isn’t working,” Police Chief Wes Hensley said. “I’m excited to see where this goes and our PD will do everything we can to make that successful.”

The low-barrier shelter would be an aluminum skeleton covered by a high-tension fabric. The fabric is pre-cut to fit and bolt into the metal frame including skylights for natural light during the day. The shelter materials are manufactured by Sprung Structures based in Alberta, Canada. Richard Renard, public sector liaison for the company, said the structures are like plane hangars that can be partitioned into separate rooms. He said large, open floorplans are important for helping the homeless transition from living outdoors.

“A lot of time these folks are living outside and when you put them into something small, they get really antsy and constrained,” Renard said. “When they walk into a structure with an open presence, with skylights, with natural light, it makes them more comfortable.”

Sprung Structures have already been used for similar shelter projects in Fresno, Bakersfield, Los Angeles, San Diego and several others in the United States and Canada. Clevenger said the Tulare project would be over 3,000 square feet and 38 bunk beds, located at least six feet apart, would provide 76 beds now but possibly much more after the pandemic.

Councilmember Carlton Jones was skeptical of the project because he said it was addressing the symptom rather than the cause of homelessness.

“This addresses the homeless but not the issues of what led them to be homeless,” Jones said. “This is just catching rain drops in a bucket … when the buckets are full, you’re pouring them on the leaking roof. I would rather fix the roof.”

Councilmember Terry Sayre said the project is run by Lighthouse Rescue Mission, which already provides wrap around services for mental health and drug addiction. She said most of those living in Tulare parks, such as Centennial Park in her district, are homeless due to a sudden loss of a family member, often the person providing income for the family. The shelter would not only provide them a place to get out of the elements but also a centralized location where social workers, counselors, housing coordinators and job assistance programs can schedule times to meet with them without searching the city.

“The people that come will be those who want to get out of homelessness,” Sayre said. “This shelter will help them get over drug addiction, get services for mental health, help them find jobs and keep them from going back into homelessness.”

Clevenger agreed, saying Lighthouse is not in the business of giving homes but rather giving people purpose and hope.

“What ends homelessness in people’s lives is giving them a positive purpose throughout the day by work or volunteering, a safe place to call home after a long day of ups and downs that allows them to destress, and a peer support community,” Clevenger said. “There is no way this isn’t the business the Lighthouse is in. This is what the Lighthouse will do with anything we do.”

Jones also questioned locating the shelter at 444 E. Cross Ave. in downtown, saying “more people will be upset.” John Harmon, director of Downtown Association, said locating a shelter in downtown is not a new idea and it still isn’t a good one. He said there are “major concerns” the 200 people located at the site will go out into downtown and the city will get complaints of “defecation and urination.” He also said the city may lose Lange Plumbing Supply Inc. if they locate the shelter next door to his business.

“There are opportunity costs involved in locating homeless shelters in a business district,” Harmon said. “[Lange] is not going to be a very happy business owner.”

Councilmember Greg Nunley asked if the beds at the shelter could be used by homeless from other communities.

Clevenger said homeless from other communities could end up at the Tulare shelter, but Tulare’s own homeless population could increase if they don’t find a way to get people off the streets in order to provide a pathway to more permanent housing.

“When chief and his crew can go out and say the streets are clear, only then can you achieve a lower daily amount of homelessness, and we will diminish the amount of beds as that occurs,” Clevenger said.

Sayre motioned to approve the $500,000 to purchase and assemble the shelter and to direct staff to apply for state grants to purchase and assemble 15 pre-fabricated units, both being located at 444 E. Cross Ave. Funding for the shelter will come from the city’s portion of Permanent Local Housing Allocation Program (PLHA). The funding source was created by Senate Bill 2 passed in 2017 to address the shortage of affordable housing and homeless housing in California. The Building Homes and Jobs Act established a $75 recording fee on all real estate documents. Seventy percent of the funding goes to cities and 30% goes to the state.

The pre-fabricated homes would be funded by a grant through Project HOME KEY. Funded through the California Department of Housing and Community Development, HOME KEY funds can be used to purchase and rehabilitate housing, including hotels, motels, vacant apartment buildings, and other buildings and convert them into interim or permanent, long-term housing.

Clevenger said the smaller housing units can transition into permanent supportive housing for the homeless and the tent structure can be broken down, relocated and rebuilt for other uses, such as hosting large events, once the number of people experiencing homelessness begins to drop.

“We have a community of 70,000 people being held hostage by this homeless issue that is no more than 200 people,” Mederos said. “We need to find a way to get this situation under some control so don’t have people worrying about being safe at night. We need to give the chief the power to do something about it. The time has come to try and do something about it.”