TULARE COUNTY – One of the three former Tulare hospital executives appeared in court last week in an attempt to dismiss charges of embezzlement, conflict of interest and using his official position for personal gain.

Alan Germany, the former chief financial officer of the Health Care Conglomerate Associates (HCCA), the company that formerly managed Tulare Regional Medical Center, filed a motion for demurrer via videoconferencing at an Aug. 19 hearing. Germany is charged 11 counts of embezzlement, four counts of conflict of interest, one count of using his official position for personal gain and one count of failing to file a statement of economic interest. Demurrer hearings are held before a judge without a jury to determine if the complaint is on solid legal grounds. The judge alone will then decide if the complaint, or at least parts of it, must be amended before moving to the trial process beginning with an arraignment or dismissing the complaint or parts of it.

Most of Germany’s charges stem from his former position as CFO for HCCA, which in turn made him acting CFO for both Tulare Regional Medical Center (TRMC) and Southern Inyo Hospital (SIH), a rural hospital in Lone Pine, Calif., about four hours east of Tulare over the Sierra Nevadas. The management service agreements HCCA signed with both TRMC and SIH did not expressly include a CFO, of which neither board was aware. The oversight in the contract meant both districts were charged a fee, in addition to their management contract for CFO services with Germany. Within a year at TRMC, Germany’s contracted fees had risen from $561,000 to $681,000 and allowed for up to $8,000 per month in travel expenses. This was about twice the national average for CFO salaries, according to the California State Auditor. By the end of 2016, Yorai “Benny” Benzeevi and Germany transferred $700,000 of property tax revenues from Southern Inyo to Tulare Regional, in part as a reimbursement for Germany’s consulting fees and to balance the books as part of a money laundering scheme, according to the DA’s filings. HCCA also billed Southern Inyo for hours which Germany had already been paid for by Tulare Regional. Germany also had Tulare Regional staff generate false billing invoices to Southern Inyo for time that Tulare Regional had already paid for.

Germany allegedly worked with Benzeevi to orchestrate the line of credit between TRMC and SIH. HCCA extended a $250,000 line of credit from Tulare to Southern Inyo in March 2016 and subsequently increased to $500,000 just four months later. In return, HCCA received $3.1 million it charged to SIH as a fee for guaranteeing the loan. Additionally, the two HCCA executives coordinated took $16,000 worth of hospital beds, IV pumps and refrigerators from Tulare Regional and sent them to help reopen Southern Inyo, which was short on equipment and had a shortfall in cash flow. 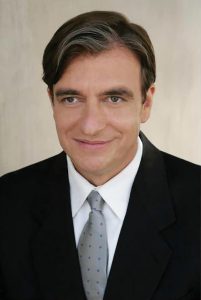 The DA also alleges Benzeevi and Germany embezzled about $3.8 million in U.S. Treasury funds meant for the district as part of a federal program to alleviate the bond burden on taxpayers following the housing crash of 2008. The program, known as Build America Bonds, was created under the American Recovery and Reinvestment Act of 2009 to provide much-needed funding for state and local governments to subsidize borrowing and buy down interest rates for needed capital projects when city finances were dwindling, according to the U.S. Treasury. The program provided a direct payment of 35% of the district’s interest payment. By not transferring the federal payments to the district on July 14, 2015; March 15, 2016; July 18, 2016; Feb. 17, 2017; and Aug. 14, 2017; taxpayers in the district paid hundreds of thousands of dollars more to repay their bonds.

“Defendants … used their position of trust to carry on their illegal activity in secrecy and to avoid public scrutiny,” the DA writes in the complaint.

As CFO for Tulare Regional, Germany had an interest in HCCA collecting on any debts when he told the Tulare hospital board to approve a $22 million loan in June 2017 that would be used to pay for operational expenses and to repay indebtedness and other purposes after HCCA claimed the district owed it $6 million in employee lease payments dating back more than three years to the beginning of the contract in January 2014.

None of the former HCCA executives, including Germany, filed Statement of Economic Interests for their obvious conflicts of interest. According to the complaint filed by the DA, Germany claims Greene told him he did not need to file the Form 700, but Compliance Officer Delbert Bryant informed Benzeevi that he, Germany and Greene all needed to file the form.

Germany’s attorney, Kevin Rooney, said his client not only pleaded not guilty but outright objected to counts 10, 18 and 37 because they fail to provide the defense enough time to adequately prepare for trial and that proceeding would violate Green’s Fifth Amendment right to due process.

Count 10 involves Germany’s alleged role in extending the line of credit from TRMC to SIH. Count 18 charges Germany with having a conflict of interest while serving as chief restructuring officer at SIH. Germany convinced Southern Inyo’s hospital board to sign a $2 million line of credit with a 20% interest rate with Vi Healthcare, a company owned by Benzeevi, Germany’s boss at HCCA, Tulare Regional and Southern Inyo. Benzeevi used his leverage as financier and gave an ultimatum to Southern Inyo to either accept the terms of the loan or lose out on future lending with Vi Healthcare, HCCA and Benzeevi, which are all one and the same.

Count 37 claims Germany had a conflict of interest in regards to HCCA selling TRMC hospital equipment to Celtic Leasing. Germany had a hand in creating the leaseback loan with Celtic Leasing which resulted in HCCA being paid $3 million and leaving the district with an $80,000 per month payment to lease back its own equipment.

Trevor Holly, representing the Tulare County District Attorney’s office, requested Germany’s legal team agree that Germany not be allowed to leave the country and surrender his passport due to his attorney. It was also agreed the case is in the jurisdiction of Tulare County and will be heard in Tulare County Superior Court.

Germany’s next hearing will be a preliminary hearing setting and demur hearing on the contested charges held at 8:30 a.m. on Sept. 30, 2020 in Department 3 of the Tulare County Superior Court.