Tulare County polling places will open on Oct. 31 where voting will continue through Nov. 3; voters are encouraged to bring in their vote-by-mail ballot to their voting place if they decide to vote in person

TULARE COUNTY – Residents in Tulare County will not just get one day to cast their ballots this November, they will have four.

Voters who want to ensure their ballots are handled with care at their polling place will be able to go starting Saturday Oct. 31 through Monday Nov. 2 from 8 a.m. to 5 p.m. Or residents can go on election day, Nov. 3 from 8 a.m. to 8 p.m.

Of course, voters do not have to go to their polling place at all. Gov. Gavin Newsom issued an executive order on May 8 stating that each county must send voters vote-by-mail ballots.

“Elections and the right to vote are foundational to our democracy,” said the governor. “No Californian should be forced to risk their health in order to exercise their right to vote.”

Registrar of voters, Michelle Baldwin, said that if residents choose to go to their polling place it is important for them to bring their vote-by-mail ballots with them. Baldwin said this will reduce any confusion when processing their ballot.

“I think the important thing is that people remember to take their ballot and envelope to the polling site which will make the process so much easier for them at the polling site,” Baldwin said. 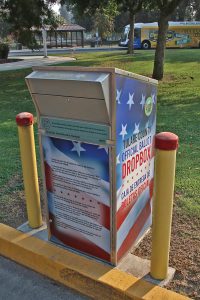 The long standing ballot drop box outside of the Tulare County Elections Office at Government Plaza (shown above) has suffered no significant damage in the more than a decade it has been established. Photo by Reggie Ellis.

Otherwise the process for voting becomes slightly less clear. Because this year the county is operating as a vote center county, the county must have one voting site per 10,000 registered voters. And residents can vote anywhere in the county and have their designated ballot printed for them. That means, for example if a voter from Tulare decided to vote in Dinuba and they did not have their vote-by-mail ballot, they would have their ballot printed out via a ballot on-demand printer with each available district they could vote in on the ballot.

Baldwin said this is not how the elections office intends on holding elections moving forward, or at least once the pandemic has been handled.

During a presentation to the Tulare County Board of Supervisors, District Five board supervisor Dennis Townsend asked whether the four days of voting would have an impact on “ballot harvesting?” The term has been used as some sort of negative connotation at the national level to imply there has been some sort of impropriety with who is turning in the ballots.

Essentially “ballot harvesting” is when a voter fills out their vote-by-mail ballot, places it back in the envelop, seals it and signs the back just as required. But then someone else offers to mail the ballot back in or drop it off at a polling site. The act is not illegal in California, although it has political ramifications as campaigns view this as another way to “get out the vote.”

When it comes to ballot collection fraud, the most likely scenario would be to collect a person’s sealed ballot and then not turn it in to the elections office. This happened in North Carolina’s 9th congressional district where ballot harvesting is illegal. A political operative for the Republican candidate Mark Harris was charged with crimes related to an alleged scheme to collect ballots before turning them in. As a result the election results were thrown out completely. Republican Dan Bishop ran in the special election held on Sept. 10 last year and won the seat.

Baldwin responded to Townsend during the presentation saying, “Anyone can drop off ballots in a ballot box. Anyone can put it in there. On election day at 8 p.m. they are emptied. No one can put in ballots after that.”

Creating even more of a challenge is the availability of poll workers.

Baldwin said to the board last Tuesday that they, “have had a lot of poll workers refusing to work.” Presumably because of the potential exposure to the novel coronavirus.

The topic that has dominated headlines for weeks leading up to the election is the security of the ballots themselves. Voters obviously still have the option to fill out their vote-by-mail ballots and drop it off at their trusted voting site in the three days leading up to election day and election day itself. But voters will also have the option to drop off their vote-by-mail ballots at a designated ballot box.

Baldwin said the elections office is required to post one ballot box per 15,000 registered voters. This leaves 12 ballot boxes placed throughout the county with at least one in each city. The boxes themselves were recently purchased through American Security Cabinets, bolted in cement and has a fastened lock cover. The mail slot is designed in such a way where a voter can drop their ballot in but would not be able to reach their hand or arm inside to reach the ballots. Nor is the construction of the ballot box so insecure where someone could kick in the sides or saw off the legs and run away with ballots.

Baldwin said that the ballot box that stands outside of Government Plaza on Mooney Boulevard in Visalia has been installed for over a decade and has not been severely damaged or attacked once. With that level of security, the ballot boxes installed this year are expected to stay for the foreseeable future.

Aside from ballot harvesting some at the national level have expressed grave concern over voter fraud writ large in the country. But the statistics don’t pan out. According to an investigation by National Public Radio more than 250 million ballots have been cast by mail nationwide, wile there have been just 143 criminal convictions for election fraud over mail-in ballots. Which averaged out to a 0.00006% fraud rate.

Ballots are expected to be mailed to voters on Oct. 5 at which point they could be mailed back or dropped off at a ballot box at any time. The key difference this year is when the elections office can start tabulating the ballots they receive. In any normal year the county elections office could only tabulate mail-in-ballots 10 days prior to election day. This year they can begin tabulating ballots 30 days before election day.

Baldwin said the elections office is still working with city staffs to organize a nightly collection process for each ballot box. She said two staff members will have to go and collect the ballots each night, count each ballot, sign a “chain of command” log—that denotes who collected the ballots, when they collected them and how many there were—and then an elections office staff member will retrieve the ballots in the morning. Ballots are to be placed in a secure room with restricted access at whatever city facility the ballot box is closest to overnight.

These proposed consolidated polling places were not finalized as of press time and may be subject to change. If changes are made and finalized The Sun-Gazette will run an updated and complete list.

These proposed ballot box locations were not finalized as of press time and may be subject to change. If changes are made and finalized, The Sun-Gazette will run an updated and complete list.