Exeter to be a haven for Three Rivers wildfire evacuees

TULARE COUNTY – Residents in Three Rivers were told to leave their homes on Monday, Sept. 14 for fear of being caught in the SQF Complex Fire.

As of press time the fire has consumed 107,101 acres and was 12% contained, and has taken 104 structures. The Tulare County Sheriff’s Office and Fire Department along with the Office of Emergency Services called for a mandatory evacuation for portions of Three Rivers, south and east from 198, east to south of the Fork Campground, including South Fork Drive, Horn, and Cahoon Mountain and adjacent roads, due to the SQF Complex fire activity.

“We understand the news about lost structures, people’s homes, is difficult to hear,” said Sequoia National Forest Supervisor Teresa Benson. “We are asking for the public’s patience as the safety of firefighters’ lives is paramount. As soon as it is safe, affected communities will be assessed and property owners notified by county officials.”

And while the Red Cross has been put on standby, temporary evacuation point site manager, John Martinez said he did not expect to get too many Three Rivers evacuees as of Monday afternoon. But the mandatory evacuation order was still recent. 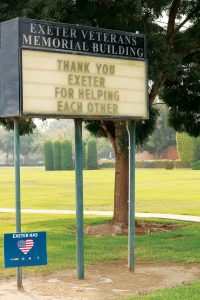 The Exeter Veterans Memorial Building established their community message after the pandemic began in March but the message may want to broaden its scope to helping other communities. Photo by Paul Myers.

Martinez said if they get any evacuees their role is to help them find shelter in a hotel or motel. He said the Exeter Veterans Memorial Building is not being used as a temporary shelter. He added that the Red Cross does not do this in the form of vouchers.

“Twenty-five years ago we used to use vouchers. People would drive up and pick them up. Now there’s the internet and we just don’t need them anymore,” said Kate Henry, senior disaster program manager for the Central California Red Cross region. “The hard part right now is finding pet-friendly hotels.”

Also at the Red Cross station are a handful of Tulare County social workers ready to connect evacuees with services if need be. Henry said she is happy to be partnering with the county’s staff.

The Castle Fire took a turn west on Saturday night according to fire service. They said a significant fire run that pushed the fire west, began on Saturday and continued through Sunday. As of Monday the fire was 1.5 to 2 miles west of Mountain Home. Fire activity began early on Sunday, with the Jordan Peak Communication Tower being impacted just after midnight.

While not a mandatory evacuation order as of press time on Tuesday, the Tulare County Sheriff’s Office stated in a press release that residents in Springville need to be prepared.

“Sheriff Boudreaux has now issued a [voluntary evacuation warning] for Springville,” the press release stated. “This is [not] a mandatory evacuation order. [But] those who live in the Springville area need to be prepared to leave. Those who require more time to evacuate, or who have large animals they need to move, should begin leaving now.”

Tulare County Animal Services also announced over the weekend that they are sheltering large animals in the north and south sides of the county. They asked for those living in the south county to use the Porterville Fairgrounds as animal services has established overflow locations for large animals including a facility with 40 pens and three additional areas where they have pasture land for housing.

For the north county, the Woodlake Fair/Rodeo grounds, located at 19400 Avenue 398, has been identified as the point of entry for large animals being evacuated.

There are volunteers lined up with trailers ready to assist where necessary and animal services has a livestock trailer in the south county and one ready to deploy for north county needs. Additionally, there is a small two-horse trailer at the shelter ready to deploy.

For domestic animals there is the Emergency Response trailer loaded and ready for use in the north or south part of the county. If you have animal sheltering needs, staff can assist with supplies.

The following communities remain under an evacuation order:

More communities and roads could have been added to this list after press time.

For other Tulare County residents not asked to leave their homes behind in search of safety, they are feeling the palpable effects of the drastically poor air quality.

“Ongoing wildfires from an unprecedented wildfire season happening across California are continuing to cause smoke impacts to all counties of the Valley air basin,” a district press release stated. “Through this upcoming week, [particulate matter] 2.5 concentrations are anticipated to remain elevated, resulting in ongoing unhealthy air quality across the region.”

The district stated that the unhealthy air quality will continue to impact the Valley through the coming days and warns residents to stay indoors to reduce their exposure.

Particulate matter (PM) pollution can trigger asthma attacks, aggravate chronic bronchitis, and increase the risk of heart attack and stroke. Individuals with heart or lung disease should follow their doctors’ advice for dealing with episodes of PM exposure.

Those with existing respiratory conditions, including COVID-19, young children and the elderly, are especially susceptible to the health effects from this form of pollution. Anyone experiencing poor air quality due to wildfire smoke should move indoors, to a filtered, air-conditioned environment with windows closed. The common cloth and paper masks individuals are wearing due to COVID-19 concerns may not protect them from wildfire smoke.

This week the Lindsay Wellness Center stated in a social media post that they are canceling all of their outdoor fitness services including the pool and classes until, “the smoke lifts and ash stops falling from the sky.”