Realtors dream up a plan to revitalize downtown Tulare

TULARE – Two local realtors are hoping a building that once brought people to town will now bring Tulare residents back to downtown.

Blake Shawn and Jacob Fraga, realtors with Dani Blain Real Estate, held an event on Saturday evening previewing their conversion of a vacant building at the corner of L Street and Kern Avenue into a co-working space for local artists and professionals “to gather, collaborate, work, and empower one another in their individual or collective goals for their businesses and community,” Shawn said.

Both men were born and raised in Tulare and in their 20s. Shawn, 29, is a Tulare Union alumnus and has been in real estate for eight years. Fraga, 24, graduated from Mission Oak High School and has been in real estate the last three years as part of “Team Shawn” for broker Dani Blain. Six months ago they decided they wanted to open a business in downtown Tulare and just two months ago closed on the property at 241 E. Kern Ave.

“From vision, to contract, to lots of ups and downs, to officially owning the building and beginning demo. We love this city and will fight for everything and everyone good in it. We challenge you to speak positively about what this city can become… Pray for it and support those who are courageous enough to risk it all on it,” Shawn posted to The Downtown Dream’s Instagram prior to the event.

The 2,500-square foot building will be able to accommodate 20 to 30 work stations between five private offices available for monthly or annual leases, a photography/videography studio, three conference rooms and both sitting and standing work stations in between. There will also be a lounge area with couches and armchairs, patio seating and a full kitchen, where workers can brew Keurig pods, creamer and sugar at cost or bring their own.

In addition to a fully functioning kitchen stocked with coffee, The Downtown Dream will have space for workers to bring and store their own food, a coffee cart serving drinks on the patio and food trucks setting up shop in the parking lot. 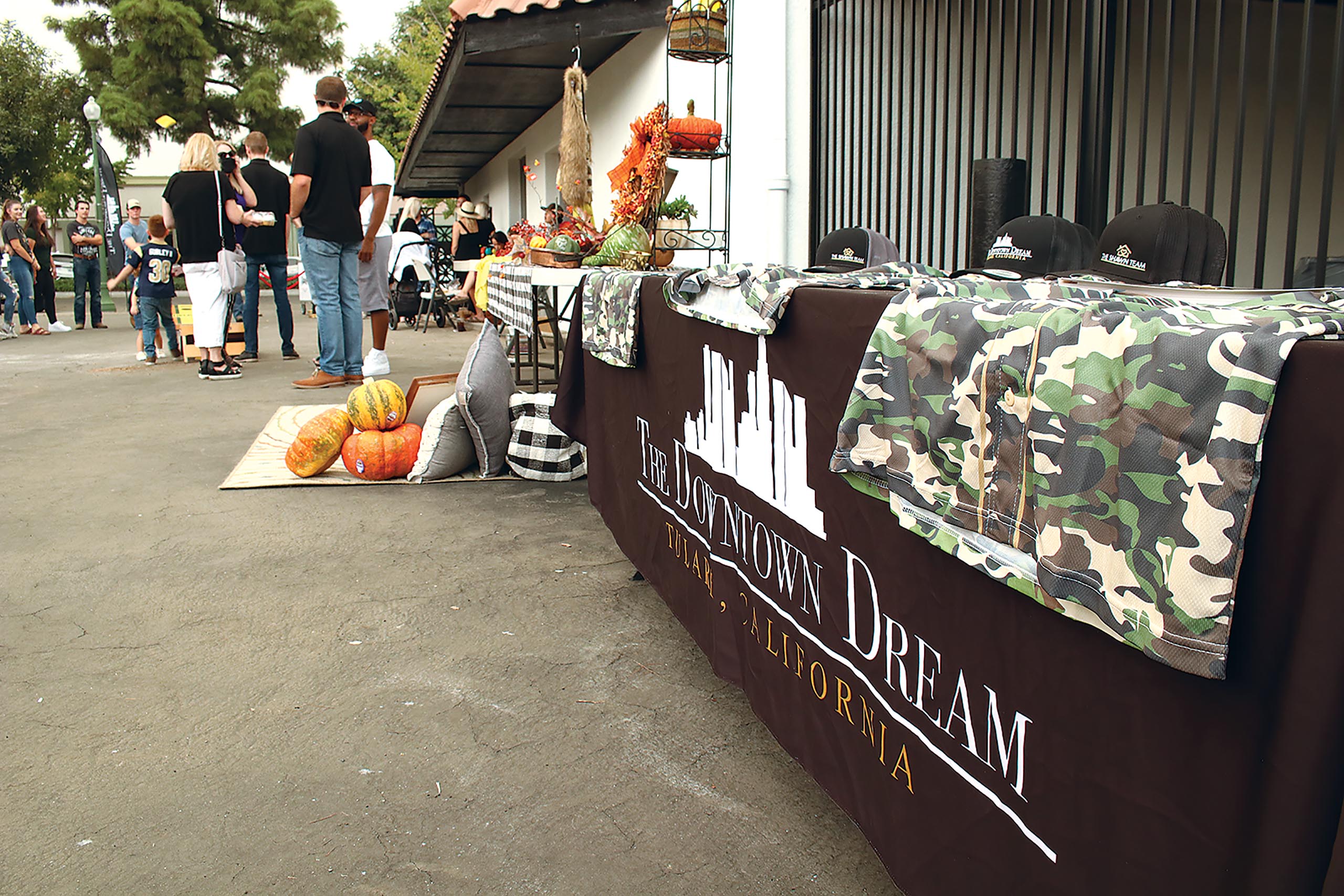 Tulare welcomes a new dream for downtown businesses with an innovative approach to draw new and upcoming businesses eager to get off the ground.Photo by Reggie Ellis

“We kind of run on coffee, so that’s a big part of what we are offering here,” Shawn said. “We’re running all day long and we know there are lots of others like us.”

Conference rooms will have lower rates for student groups, community projects and nonprofits that want to rent by the hour or the day. Each of the rooms will have themes such as aviation and the 1970s. The two entrepreneurs originally had plans to open a downtown coffee shop, but were swayed to do something different with the success of co-working spaces before the pandemic, and the number of people who began working remotely once the pandemic hit.

“Networking with creative people is more important than ever and there is less of a need to have a large office building when many people can work from home, from their car or the local coffee shop,” Fraga said. “This will allow them to have a place that has some of the comforts of a coffee shop but with the collaboration of other creative people.”

The building was owned by the Lewis family, and was the former home of Lewis Insurance Co. for many years before moving the family-run business to its current location at 1108 Leland Ave. in Tulare. The building originally housed a bus station in the 1940s. Shawn and Fraga have an old photo of people posing in front of it the Greyhound Bus Station in the 1950s they are hoping to recreate at some point.

Shawn said the goal is to eventually outgrow the building. He said he hopes one of the businesses will begin to hire employees and want to lease out the building. He and Fraga already have plans to purchase another, larger building in the downtown area where they can begin the process over again. It’s their vision they can inspire other businesses to reinvest and restore a once vibrant downtown.

“We are a group of young professionals who desire to see Downtown Tulare renovated to its fullest potential. We are doing this one building at a time and beginning our adventure on the corner of ‘L’ & Kern in Downtown Tulare,” Shawn said.

The event, which they called a pre-grand opening, brought about 100 people to the parking lot behind the building where local food vendors sold their food, including Scoops Ice Cream cart, Bombshell Beans Coffee truck and The Cupcake Route truck.

Next door neighbors Used Treasures came over to support the event. Thrift store owners Tricia Hamstra and Lorraine Hettinga were excited to see a new vision for downtown.

“We are so excited to have these new ideas and to see this revival happening in downtown,” Hettinga said. “The new owners are young, they have a vision and they are making their dream a reality.”

Hamstra added, “They are bringing a nice energy to downtown. This is something the downtown needs.”

Just one block over, Hettinga said businesses on K Street have been partnering with each other to plan events for the last few years. She said she is hoping The Downtown Dream will create a similar atmosphere on K Street and ignite a movement that will revitalize downtown from the inside out.

“I think they are beginning a new movement that is very welcoming to people and attractive for new business owners,” she said.