TULARE – While the World Ag Expo is canceled for 2021, that has given Tulare more time to finalize their plans for what will be an internationally used interchange.

Early last month Tulare and other agencies announced they will be making significant upgrades to the Highway 99 and Commercial Avenue interchange. According to documents detailing the project, the entire cost will be $52.8 million.

The Tulare County Association of Governments (TCAG) in partnership with the Caltrans and the International Agri-Center announced it is receiving $16 million in federal grants to construct the project. The award is from the US Department of Transportation’s Better Utilizing Investments to Leverage Development (BUILD) Transportation Grants program. Those funds, in combination with TCAG funds and State Transportation Improvement Program funds will make up the other $36.8 million. 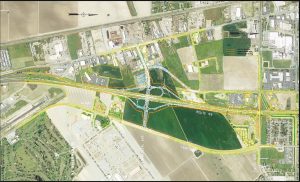 “We are all very excited to receive this grant,” TCAG executive director Ted Smalley said. “We wish to thank Congressman Devin Nunes for his support and efforts to receive this critical grant. We had great partners with Caltrans and this will be an awesome project once it is completed.”

“We have had a very successful history in partnering with TCAG on multiple projects on State Routes in Tulare County,” Caltrans District 6 director Diana Gomez said. “We look forward to the completion of another project that we can all be proud of and that will greatly benefit the traveling public.”

The project when completed will perform at a level to support the BUILD program criteria. The project has both state and federal environmental approval along with most of the right-of-way dedicated or owned by the City of Tulare and will be ready for the construction phase (funding obligation) by May, 2021. The purpose of this project is to improve transportation operational performance with a new interchange, consistent with the goals of Caltrans, TCAG, the city and private industry. The project will relieve future traffic congestion on the mainline freeway and local roads, improve safety, enhance the movement of public traffic and goods, and spur economic development. Each project partner is contributing to the development and success of this innovatively designed and funded interchange project. Caltrans is managing the development and construction of the project and has already completed the environmental review and documentation. Caltrans is currently in the design and right-of-way phase of the project. The City of Tulare endorsed the project alternative recommended from the environmental review and continues to work with Caltrans regarding utility placement and project staging.

TCAG has secured the necessary construction matching funding for the project from the half cent sales tax, Measure R, and the State Transportation Improvement Program (STIP). There is significant public interest supporting the completion of this project. The International Agri-Center and the Faria family (a local family farm land owner for four generations) contributed $1.5 million for the completion of the environmental review and documentation for the project. In addition, the Faria family has dedicated 80% of the needed right-of-way for the project at an estimated $8 million in value. If TCAG were to receive a BUILD award, the funding would be transferred to Caltrans. Caltrans has completed the environmental phase and is currently completing the design and right-of-way phase. Caltrans is the best agency to conduct the construction phase in a cost effective manner. Caltrans will accept BUILD funding on behalf of TCAG.

“[September’s] announcement that Tulare will be awarded a $16 million BUILD grant represents another major upgrade to the Central Valley’s transportation infrastructure. With the grant, Tulare will be able to …[reduce] congestion and [generate] substantial economic development in our community,” Congressman Devin Nunes said.