Homelessness increases across the board, virus’ role is uncertain

TULARE COUNTY – Homelessness continues to rise if you ask the Kings/Tulare Homeless Alliance. According to an annual snapshot published in late August, but conducted in January, there has not been a decrease since 2015. And so far, the trends only continue to rise.

Point in time in Tulare County 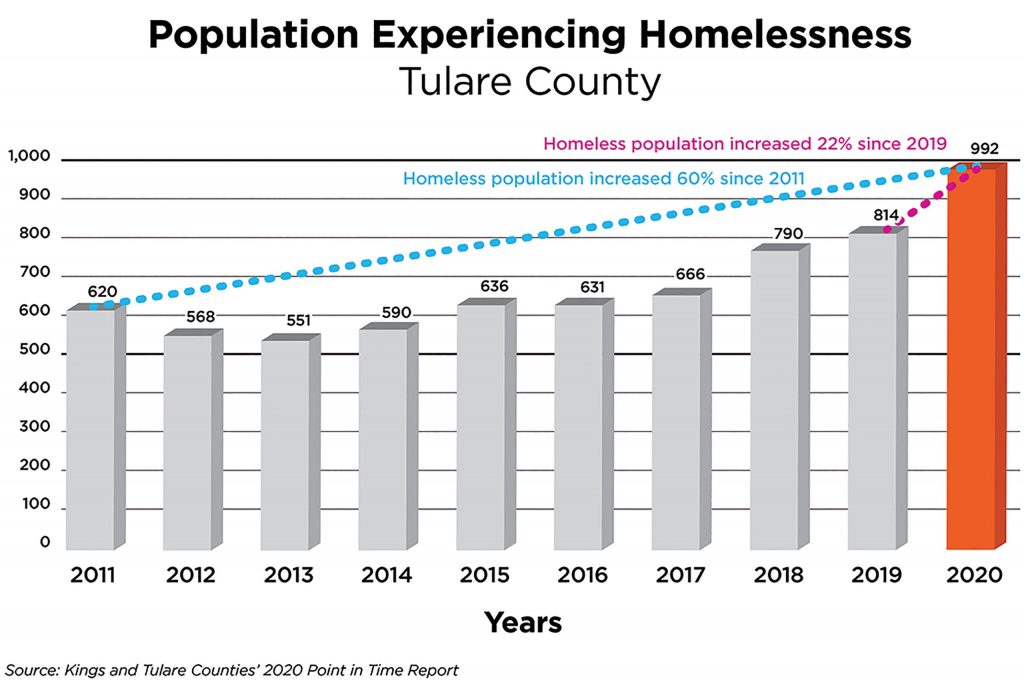 “I think it’s a lot when you look at the trend of where we’re going,” Smith said. “It’s a long time for those numbers to go up, and up, and up.”

In this year’s point in time survey, 420 of those interviewed are considered chronically homeless.

Since the coronavirus entered the United States the economy has suffered. Smith guesses that approximately 40% of the new people coming to the alliance for services were affected by the downturn. But she notes that is not a hard number.

As the Kings/Tulare Homeless Alliance has been working on accomplishing major projects like the 99 Palms permanent housing project in Tulare, and the Sequoia Lodge project currently in escrow, they have not sorted out who is specifically seeking services as a result of COVID-19. Smith said it is likely that people afflicted by the economic downturn didn’t need services for very long.

She said that services have been publicized much more broadly and it is possible someone, or a family, was homeless for two or three months before getting back on their feet.

By race, the vast majority of unincorporated Tulare County’s homeless are white. Only native Americans and African Americans come close with 6% respectively. Broken down by gender, 60% of homeless in the county are male, and 40% are female.

Most homeless by city

Only 30% of their homeless have been without a home for less than a year, while 70% have been homeless for a year or more. According to the survey’s disabling conditions 47% are struggling with mental illness; 44% are contending with a physical disability; 36% are suffering from substance abuse; and 17% are hindered by a sort of developmental condition.

Porterville has seen an equally dramatic increase over the decade, and over the last three years. Between 2011 and 2020 the city has seen their homeless population grow from 82 to 213 accounting for a 160% increase.

As of August, 35% of Porterville’s homeless had been without a home for less than a year, while 65% have been homeless for a year or more.

Somewhat unique from other cities and the county, 41% of Porterville’s homeless are afflicted with a physical disability; 39% are suffering from mental illness; 24% are dealing with substance abuse; and 17% have a developmental condition.

Broken down by race, 89% of Porterville’s homeless are considered white. The next largest category are native Americans with 7%. In terms of gender, males make up 53% of the city’s homeless to 47% female.

Even more staggering is the percentage increase since 2011. The survey notes that Visalia’s homeless have risen 148% – going from 218 homeless in 2011 to the 540 as of this summer. The amount of time being homeless matches the overall county numbers—32% were homeless for 12 months or less, and 68% have been homeless for a year or more.

Disabling conditions are only slightly off from the county’s statistics. According to the survey 38% of the city’s homeless are afflicted with mental illness; 30% suffer from substance abuse; 27% are dealing with some sort of physical disability; and 10% are dealing with a developmental condition.

While no other city touches the whole numbers of homeless that Visalia has, other cities are seeing high percentages of growth. Tulare saw a 39% increase in their homeless from 2019 to 2020, going from 146 homeless counted in the 2019 Point in Time survey to 203. Their percent increase since 2011 rose 497% going from 34 homeless to 203 over the decade.

In an interview with The Sun-Gazette Machael Smith was sure to note that the Point in Time survey is just a snapshot in the year. Homeless sometimes move to a different city for services or get themselves out of homelessness all together.

“The whole thing is that it’s a snapshot in time,” Smith said.

She said the alliance collects data from several different sources including the information collected for their own services. In all they gather statistics from the Homeless Management Information System, a web-based system that collates data by county. They also use Visalia Rescue Mission data in addition to statistics offered by other nonprofits, and government services. And they visit homeless encampments to administer surveys as well.

With 10 different data points from the Point in Time survey alone the alliance feels confident in their assessments are accurate.

“As unscientific as it is, there is a consistency and a rhythm to it,” Smith said.