Erika Sandoval who admittedly killed her ex-husband, police officer Daniel Green will begin her second murder trial after her first was declared a mistrial in December 2019

VISALIA – The saga of the Erika Sandoval trail is set to begin again this fall according to the Tulare County District Attorney’s Office.

Sandoval is standing trial for the second time for killing her ex-husband and Exeter police officer, Daniel Green. Sandoval’s story reached national headlines at the end of 2019 when 48 Hours spotlighted their tumultuous relationship and the lead up to Green’s death on Feb. 6, 2015.

The 48 Hours story published just days after Sandoval’s case was declared a mistrial when the jury could not come to a consensus. District Attorney Tim Ward immediately said that his office would pursue a second trial. 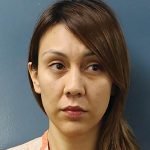 On the day Green was killed, Sandoval was identified in a security video walking up to his home and entering through the backyard. In October last year, when the trial began, Alavezos showed the security footage as a part of his opening statement. The video depicts Green’s truck leaving his house on Lickey in Goshen at 10:31 a.m. on Feb. 6, 2015. While Green is gone Sandoval enters the video, and walks onto Green’s property at 11:07 a.m.

“When she makes the right, you’ll see that her walk speeds up as she goes through the side gate,” assistant district attorney David Alavezos said as he litigated the case.

Green returned home and backed into his driveway at 12:12 p.m., and 42 minutes later at 12:54 p.m. Sandoval left through the same side yard she entered.

“She does not walk up the sidewalk, she kind of goes into the street and out, then back onto the sidewalk and then crosses this yard. Not really walking in a straight direction,” Alavezos said.

After Green was found dead in his bathroom by a fellow Exeter police officer, the Tulare County Sheriff’s Office arrested Sandoval as a suspect. Sandoval went on to confess to detectives.

During cross examination Chambers questioned Sandoval about the open safe in Green’s bedroom. She said the among other papers she found two pictures printed on computer paper of young girls in pornographic positions who were 12 to 15 years old.

“I thought, you know, I mean, like, is he watching this kind of stuff around my son? Is he doing anything to my son? I did think about my son,” Sandoval said.

Sandoval claims that is when Green arrived back to the house in his truck. At that point she said that she was in shock and unsure what to do. She went into her and their son Aiden’s room and hid in the closet. She said Green walked down the hall and was scared that she could have been seen in the closet and noted that she was thinking about the safety of Aiden and how he was being treated when he was with Green.

“I knew he’d take showers with Aiden. I didn’t know if he was doing stuff to Aiden, maybe, or just thinking about, like, the stuff that he had done with me, and what he was thinking when he was doing that stuff with me, what his mind thought,” Sandoval said.

She said she hit her “boiling point” and “snapped” and testified that she had stepped out of the closet and into the hallway with the gun that she got from the bag and approached the bathroom where Green was. She eventually shot and killed him while in the bathroom.

After four full days of deliberations that crossed from November and into December 2019, the jury could not come to a unanimous decision. Instead, the jury was stuck at 11-1. Chambers as well as DA Ward were disappointed in the decision.

Despite his disappointment in the lack of a verdict, Chambers said that he respects the juror’s opinion.

Chambers will not be a part of Sandoval’s legal team in her coming trial. Instead she will be represented by a public defender.

However, according to Ward and the profile on 48 Hours, jurors got into a heated confrontation during deliberations. Judge Joseph Kalashian, who presided over the trial, was asked to weigh in on the matter, and Alavezos requested that the jury be polled to give them a chance to identify any juror that is not cooperating. Kalashian did not grant the poll, and Ward said that it is rare to have to do one anyways.

Ward said the case will largely remain the same, based on the same evidence and the same charges and penalties. His office will continue seeking the death penalty. Ward said he expects the path to retrial to be much faster than the five years it took the case to reach the initial trial phase. He added that the prosecution will argue the same theory in September’s trial as they did before. The biggest difference will be when they address the photographs Sandoval claims to have found.