VISALIA – The city of Visalia is being sued in federal court by a man who claims he was brutally assaulted by two police officers and mauled by a police dog in January 2020.

The civil rights lawsuit was filed March 1 in U.S. District Court in Sacramento by the James DeSimone Law firm in Los Angeles on behalf of Raymundo Vicente Rubio, 32, of Visalia. Rubio alleges he was harassed by Visalia Police officers for the color of his skin, then beaten down by officers without provocation before being bitten and clawed by a police canine even though he was never accused of a crime and was never given any direct orders by officers to prevent their excessive use of force.

“Raymond isn’t the type of person who is violent, and he did nothing to justify being attacked,” attorney James DeSimone said at a news conference announcing the lawsuit on March 1 via Zoom.

DeSimone said he is asking the State Attorney General for an independent investigation of the Visalia Police Department. He also called for the city of Visalia to investigate the officers, discipline them and probably fire them.

“These are thugs with a badge,” DeSimone said.

The lawsuit states Rubio was walking in the shopping center parking lot at the corner of Walnut Avenue and Akers Street, about 400 feet from his home in the 2100 block of South Akers Street, when he was approached by Officer Marisa Burkdoll. The officer opened the conversation by asking if Rubio can take his hands out of his pockets and says “people are calling about you,” according to Burkdoll’s body cam footage provided by Rubio’s attorney. Rubio complied by taking his hands out of his pocket. She then asks what he’s doing. Rubio asks her, “what did I do?” Burkdoll replies callers said he was looking into vehicles.

Rubio then implies he is only being stopped because of the color of his skin.

“You know how it is. Let’s be real. Racism,” he tells the officer.

Burkdoll tries to get back to the reason for the questioning by asking if Rubio has a home to go to. Burkdoll then asked “Can you do me a favor and take off your backpack?”

“Because you are acting strange, like you are under the influence or something,” Burkdoll says.

About that time, Officer William Hansen pulled up in his patrol car to assist Burkdoll on the call. As soon as Rubio’s attention shifts to Hansen, Burkdoll grabs one arm and Hansen the other. Rubio continues to ask what he has done as both officers are holding his arms away from his body. After a few seconds, Burkdoll quickly grabs Rubio’s backpack with one hand and puts Rubio in a chokehold with the other, which can be seen from Hansen’s body cam footage, while Hansen grabbed the other arm. As Burkdoll wrestles Rubio to the ground and begins hitting him in the head, Hansen begins telling Rubio to relax, calm down and knock it off or he is “going to get bit by my dog.”

Burkdoll repeatedly orders Rubio “give me your hand” and “stop pulling away” to which Rubio replies “I did” while screaming in pain. Hansen then slowly backs away and opens the rear door of his car to let out his canine, Roto. Hansen holds the dog back at first and then releases the dog while shouting “stellen” (sh-tell-in), the Dutch command for bite, several times. The commands are given in Dutch because Roto is a Belgian Malinois, also known as Dutch shepherd, which are trained in the language. The dog proceeds to bite Rubio for about a minute and a half.

“You had every option to listen,” Hansen yelled at Rubio. “You didn’t do anything.”

“Get the dog, please!,” Rubio screamed.

Hansen slowly pulls the dog off and backs away from Rubio after Burkdoll has finished handcuffing Rubio on the ground.

Sgt. Celeste Sanchez, spokesperson for the Visalia Police Department, said the department received three calls for service from three different witnesses prior to the incident. The callers reported a Hispanic male, wearing a black and gray sweater, black gloves, a backpack and white shoes was in the parking lot located at Walnut and Akers looking into vehicles, acting suspiciously, and appeared as if he was under the influence.

Burkdoll arrived on scene and contacted Raymundo Rubio in the same parking lot where he was last seen by the callers. Sanchez said Burkdoll observed Rubio, who matched the description of the person described in the calls, and stopped to investigate. During her conversation with Rubio, Burkdoll observed that he was displaying objective signs and symptoms of being under the influence of a controlled substance and also believed he was the same person responsible for “casing vehicles described in the calls for service.”

In the department’s official response, Sanchez writes Rubio “resisted to the degree which prevented the officer from further investigation.” After Hansen arrived to assist Burkdoll, Sanchez said Rubio ignored commands by officers and “resisted efforts of the officers to detain him and pat him down for weapons for their own safety.”

She continued, “Ultimately officers used physical force to attempt to detain Rubio and gave him commands to comply or a Police K9 would be utilized. Rubio continued to resist their efforts to detain him and ultimately was taken into custody with the assistance of the Police K9.”

Sanchez said Rubio was immediately taken to an area hospital for medical treatment and evaluated for being under the influence of a controlled substance and would later test positive for methamphetamine. After Rubio received medical treatment, he was booked at the county jail.

VPD confirmed both Burkdoll and Hansen are currently working on patrol and neither has been placed on administrative leave.

“Due to the pending suit, the information which can be provided is limited,” Sanchez stated. 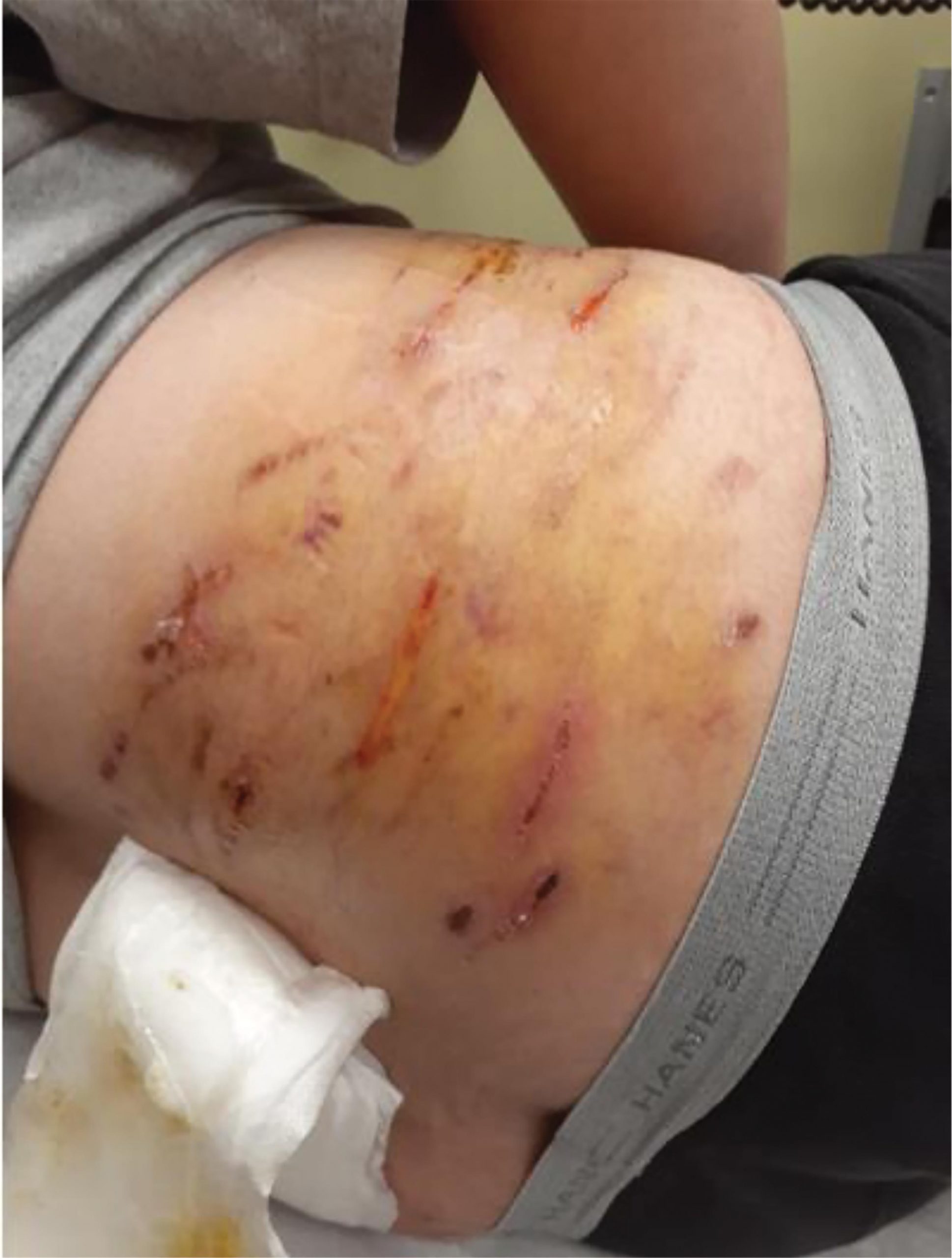 Raymond Rubio was aggressively attacked by a VPD K9 during a January 2020 arrest causing severe damage to his back and legs. Rubio and his family are now suing VPD for police brutality.Photo courtesy of James DeSimone

The lawsuit alleges the officers’ conduct was “willful, wanton, malicious and done with reckless disregard for the rights and safety.”

In addition to the two officers, it names Police Chief Jason Salazar and the Visalia Police Department for its failure to “train its officers in the constitutional response to law abiding citizens” and because they “have a custom of using excessive force against law abiding citizens, striking people with fists and objects and unleashing dogs to tear into flesh of prone and defenseless citizens without warning or command.”

“This is exactly the opposite of how police should de-escalate,” DeSimone said. “It’s outrageous how they don’t give him the slightest chance to comply before they unleash this unjustified violence and the cruel way they kept the dog biting him.”

DeSimone, who has spent the last 30 years representing individuals in police brutality cases, points out the incident happened on a Wednesday night at about 8:30 p.m. and the parking lot was seemingly empty based on the body cam videos. He said the use of force is only authorized when it is “reasonable and necessary,” neither of which was applicable in the case of his client who complied with every direct order and never once made any verbal threats or any threatening motions toward officers.

DeSimone contends the officers then lied about the incident to their commanding officer who arrived on the scene later after Rubio had been placed in the back of one of the patrol cars. A third body cam video from the unnamed commanding officer shows Hansen saying Rubio backed away when approached by Burkdoll and that he warned Rubio six times he was going to get bit.

“He even looked at me and my dog,” Hansen told the commanding officer. “Alright, so the fight was on.”

DeSimone said Rubio never backed away from officers and never made any threatening motions while standing there talking with them after taking his hands out of his pocket, the only order he was ever given before being wrestled to the ground.

To add insult to injury, DeSimone said the city not only rejected Rubio’s claim for damages, a common practice for any claim filed against a city, last July but also went ahead with prosecuting Rubio for resisting arrest. According to court documents, the Tulare County District Attorney’s Office filed charges against Rubio on July 27, 2020. The charges included a felony count of resisting arrest and three misdemeanor counts including resisting arrest, possession of methamphetamine, being under the influence of methamphetamine, and being in possession of drug paraphernalia. The DA later amended the felony count to a misdemeanor.

“He never resisted these officers,” DeSimone said. “They never gave him a chance to comply or resist.”

DeSimone said the lawsuit is more than just seeking damages for his client. He said the Visalia Police Department has a history of abusing their authority when it comes to the use of canines. At the press conference, DeSimone cited a video from last October showing a Visalia K9 biting a schizophrenic man’s face after the man’s mother called 9-1-1 seeking officers’ help in getting him medical assistance. He also cited the arrest of a former member of the city’s K9 unit that same month on charges of domestic violence, allegedly the second time in six months the former officer had been arrested for domestic violence. The 16-year department veteran left the city’s employ in May 2020 for undisclosed reasons.

“City of Visalia and police officers are using police dogs in a brutal way against its own people,” DeSimone said. “It’s business as usual over there.”

The case is further complicated by Rubio’s mental faculties. Rubio’s mother, Helen Salinas, also spoke at the March 1 news conference, said her son has been mentally disabled his whole life. DeSimone confirmed Rubio has been receiving Social Security payments for permanent disability since he was a child.

Salinas said prior to the incident, her son Ray was a fun person to be around, with a great sense of humor. He liked telling jokes and making people laugh. He loved being around family and friends and going to the local convenience store, similar to the night of the incident. He loved music and dreamed of becoming a singer. He never feared walking freely alone anywhere.

“All that changed after the police attacked him, hit him in the head, and cruelly commanded the dog to chew on his flesh,” Salinas said in a statement read by attorney Ryann Hall.

As a result of the officers’ actions, DeSimone said Rubio suffered a traumatic brain injury, deep bite wounds to his back, torso, left hand and arm. He now suffers from depression, memory loss, heightened paranoia, headaches and other mental and emotional injuries, as well as physical scars, resulting from the attack. According to the lawsuit, Malinois have one of the strongest bites among dogs, equal to 195 pounds per square inch of pressure, which is enough to break bone.

She said her son is afraid to go outside and spends most of the time in his room. He has nightmares and flashbacks of what happened to him, and he’s terrified that the police are going to come and kill him. He doesn’t want to be around people anymore, not even his family, and does not laugh or tell jokes anymore. He’s always depressed, complains of constant headaches, and suffers seizures and back pain.

“I’ve seen the video,” Salinas stated. “The police never gave my son a chance. Now we are asking for a chance at justice, to help my son and to stop this from happening to any other families.”